The apricot is a plant which is grown in Central Asia and around the Mediterranean. Apricot kernels are rich of healthy fats, fibber and iron and similar to other types of nuts. They are used for direct consumption in roasted form or by extracting oil from them. Sweet apricot kernels enhance immunity. The content of amygdalin and its anticancer effect still controversial issue. It is considered that the amygdaline spread throughout the body and can fight cancer cells without harming the body before becoming cyanide. Femenia et al., [2], were establish the fat content 53%, sugars 7%in sweet apricot kernel and 43% fat, 14% sugar in a bitter nuts, content of oleic and linoleic acid in summary 92% from total fatty acids content. The distribution of fatty acids in apricot kernels is oleic — 74.59%, linoleic -19.57%, stearic — 0.96%, palmitic -4.11% palmitoleic — 0.59% and arachidonic acid -0.18%. Ozcan et. al., [8], were found different yield of oil from apricot kernel in the range from 42 to 57%, crude fiber from 4 to 7%, protein from 15 to 24%. The main representatives of the fatty acids in apricot kernels are oleic (53-70%), linoleic (21-35%) and palmitic, which make them an important source for food industry and other industrial production [3, 6, 7]. Similar results for fatty acid composition in wild varieties of apricots kernel were obtained from Kaya et al., [5] and Gupta et al., [4]. The objective of this study was to determine the fatty acid composition of apricot kernels from five varieties of apricots grown in Bulgaria. Apricot plants are the following sorts- Krasnoshteki, Early Orange, Silistrenska kompotna, Modesto and Hungarian best apricot grown on the area of the Experimental Station of Apricot and Agriculture in Silistra town. The extraction of the total lipidswas performed by the method of Bligh&Dyer (1959) [1] by chloroform and methanol in ratio of 1:2. The methyl esters of the fatty acids were analysed using gas chromatograph Shimadzu-2010 (Kyoto, Japan). The analysis was carried out on a capillary column CP7420 (100 m x 0.25 mm i.d., 0.2 m, Varian Inc., Palo Alto, CA), with carrier gas- hydrogen and make-up gas- nitrogen. Is programmed furnace regime of five steps. 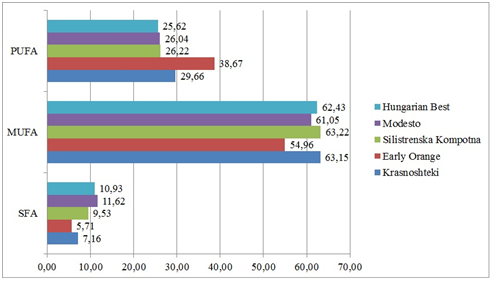 Saturated fatty acids in the analysed apricot kernels are presented primarily of palmitic and stearic acids, while the other representatives of this group are below 0.1 g / 100g fat (Fig. 2). 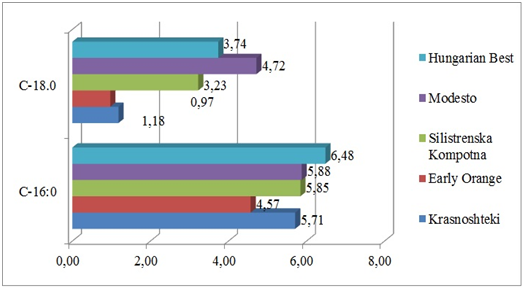 Of monounsaturated fatty acids, oleic acid and vaccenic have a relatively high concentration, while the others are in trace amounts below 0,15 g / 100g fat. 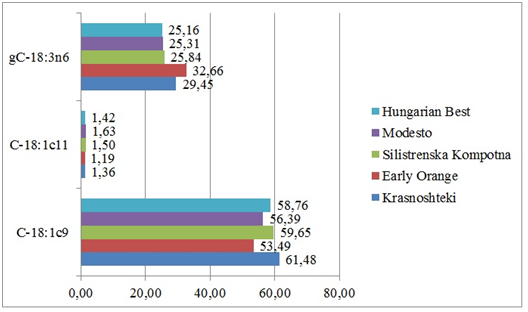 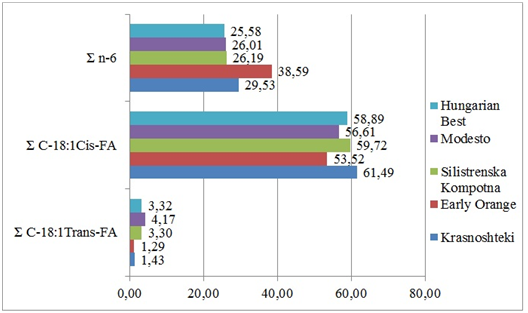 Regarding the accumulation of saturated fatty acids in kernels of different varieties apricot most suitable for human consumption is sort Early Orange. The kernels from Modesto variety is well retained content of vaccenic acid, as long as, Early Orange with oleic acid.