Eclipophleps bogdanovi Tarb., distributing in the mountainous regions (N 46.83 606° E 92.02 142°,H=2534m) of west Mongolia, can endure the cold, and this kind of grasshopper is the main members which result in the grasshoppers′ calamity in the alpine meadow of west Mongolia. Karyotype analysis is an important study means of Cytogenetics, Taxanomy and Evolutionary theory, and a simple approach to the study of chromosomes. As the basis of the genetic research of grasshoppers, the karyotype and band analysis of grasshoppers recently have achieved a lot. However, there is not any report about the karyotype of Eclipophleps bogadanovi Tarb. In this paper, the karyotype of Eclipophleps bogdanovi Tarb. will be analyzed and the results of present study will be available for subsequent morphological taxonomic and genetic research.

After the wings of a Eclipophleps bogdanovi Tarb. male collected during mating period were snipped, its testes were taken out, fixed in ethanol-acetic acid (3:1, v/v) for 10h, and displaced in 70% ethanol for use. A testis tubule, 2/3 length from the top of the testis was sought out and transferred to a microscope slide, stained in carbol fuchsin fluid for 25 min, squashed and observed by microscope. The slides with metaphase were sealed with Canada Balsam to preserve. Chromosome numbers of fifty-five metaphase cells were counted and five well-scattered metaphases were chosen to be photographed with Motic-BA200 digital photomicroscope system. The chromosomes of the five were measured with Motic Images Advanced 3.2 software, and the data were pooled for subsequent karyotype analysis.

As result from table 10 that 67 % of the total Eclipophleps bogdanovi Tarb. grasshoppers have spread throughout in Mongolia. An endemic of in the Altai-Sayan Mountains belong to the family of Orthoptera in Altai Mountains. It adapted porous herb and extreme climate in environments so it has than small or medium body. Male body has long 14.0-14.6 and females 17.5-21.6 mm and the front wing length males 3.6-3.8 mm and females 1.4-1.6 mm. Larval passed of 5 stage development. 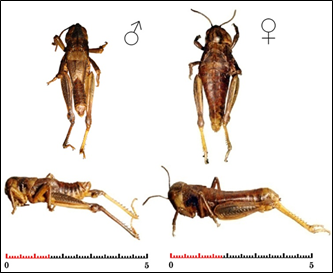 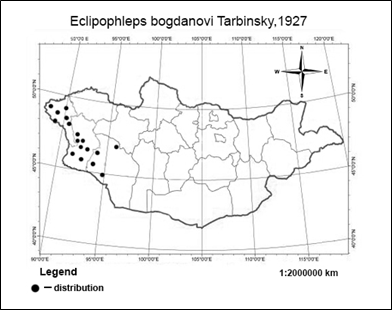 Distribution map issued on the basis of the points noted by researchers Chogsomjhav L., Batkhuyag B., on the «basic image of the Mongolian National atlas» of the Geography Institute of Mongolian Academy of Sciences. 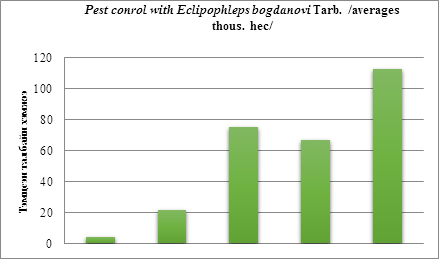 Fig 3. The chapter shows that one square meter field 1 m2 of a decrease in the average density of the area has now been shown to be associated with an increase size 2-4 combat area since 2014.

The karyotype research of Eclipophleps bogdanovi Tarb and is out to collect samples of locusts by the name «Kyakhtinskaya» of Munkhkhairkhan soum of Khovd province in western region of Inner Mongolian with Mongolian scientists in 2008. 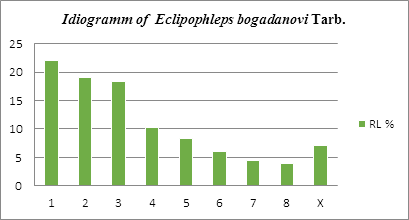 We are grateful to Mongolian and Chinese expedition for taxonomic research and for the great suggestion. Provide valuable scientific advice to perform research work in collaboration with Dr. B. Batkhuyag, professor Nonnoijav, biological teachers in University and would like to thank all those teachers Tai involved Lihua, director of the Institute of Geography Bao Yuhai of Inner Mongolia.