Research in area of electromagnetic metamaterials has been drastically increased in the last 20 years: in 1990th the amount of papers in this area was counted in ones, nowadays thousands of papers are published annually [4, p. 8]. The main reason for this rise of interest in this field is due to demands of technologies, which require materials with unique properties, but also discoveries in new materials can result in development of new technologies. Examples of such technologies would be: devices for control of radiation in THz frequency spectra, reflectionless coatings, Stealth-technologies and many others [6, p. 448]. Developments of described technologies require the thorough research of electromagnetic waves behavior in metamaterials.

To describe gradient transmission line, which can be viewed as a heterogeneous section (with spatial dependency of parameters), situated between two homogeneous sections (no spatial dependency of parameters), two independent functions must be taken into account [3, p. 53]: spatial distribution of capacity C(z) and inductance M(z). The spatial-temporal variations of current I and voltage V are known to be characterized by the telegraph equations, describing the propagation of electromagnetic wave in z-direction [5, p. 251]: 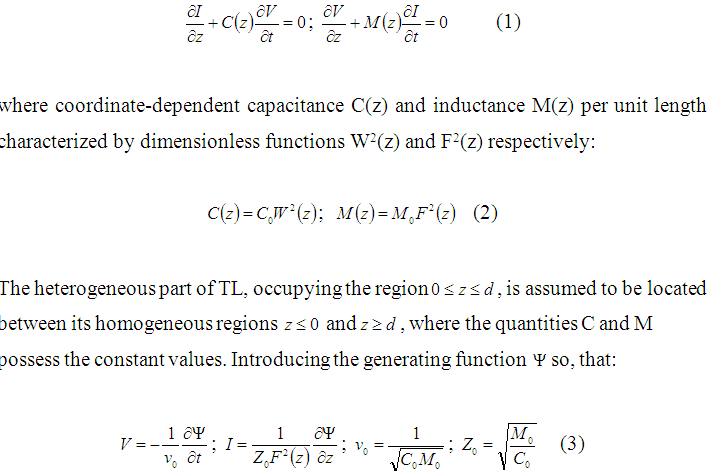 The second equation in (1) is reduced to identity, while the function is governed by the first equation, which reads in this case as: 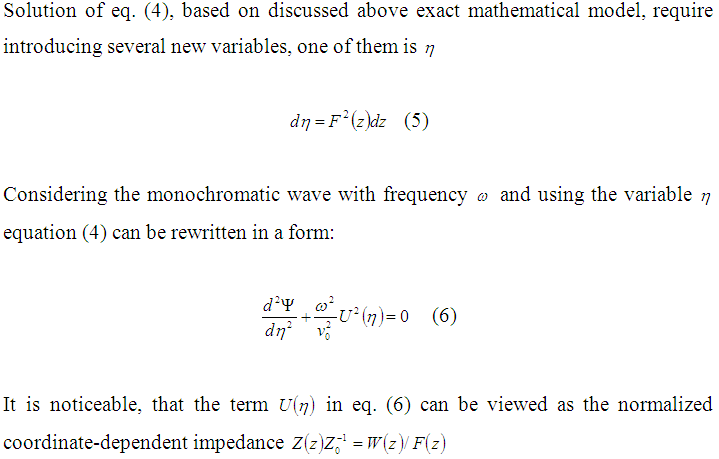 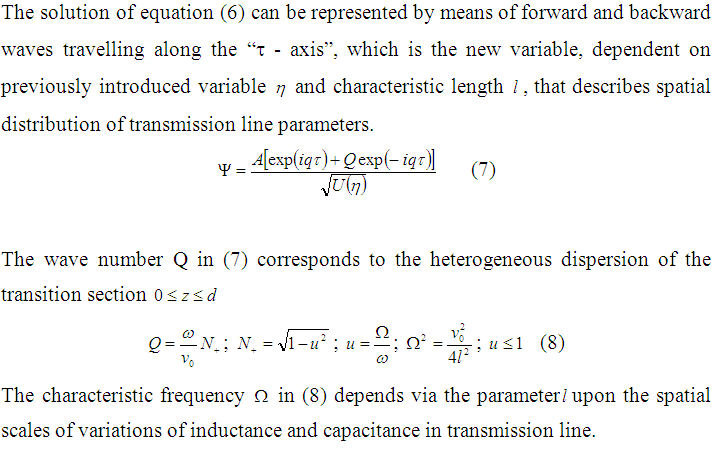 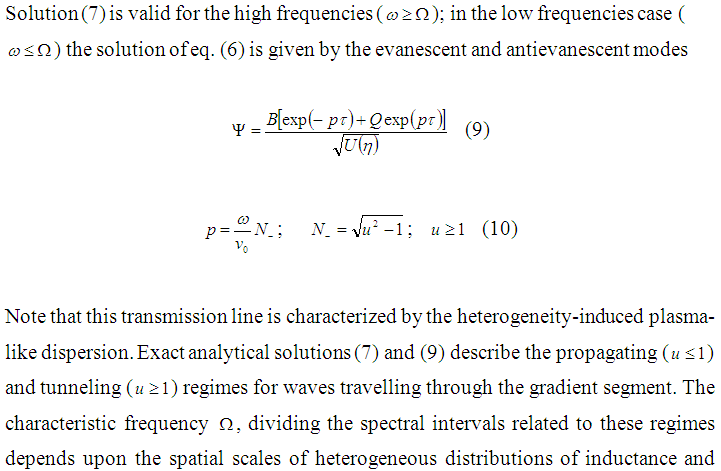 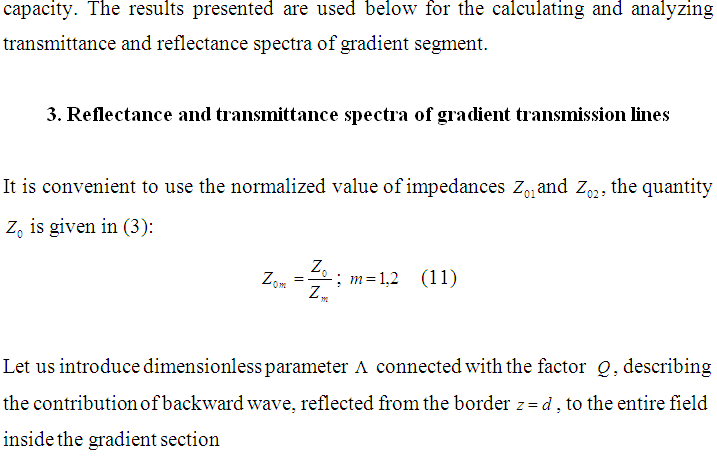 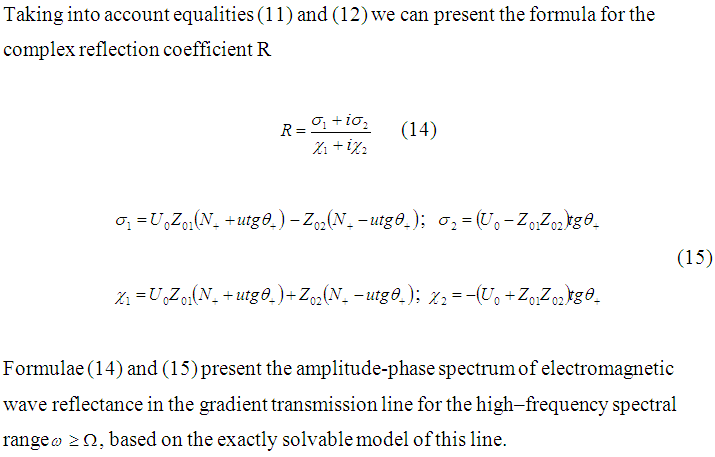 To analyze propagation of electromagnetic waves in gradient transmission line, two coefficients must be introduced: reflectance coefficient with respect to power |Rm|2 and transmittance coefficient given by the obvious relation: 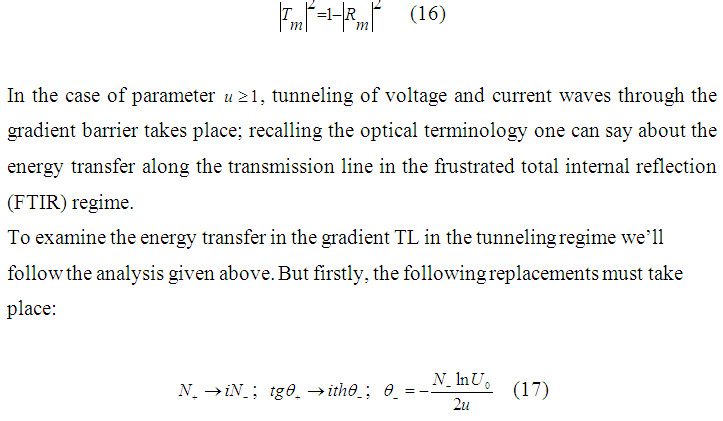 The complex reflection coefficient for the problem discussed can be presented in the form (14); however, it’s real and imaginary parts are distinguished from those ones given in (16): 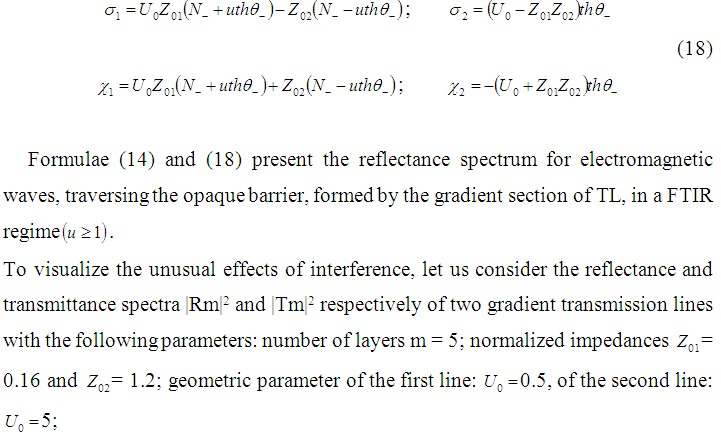 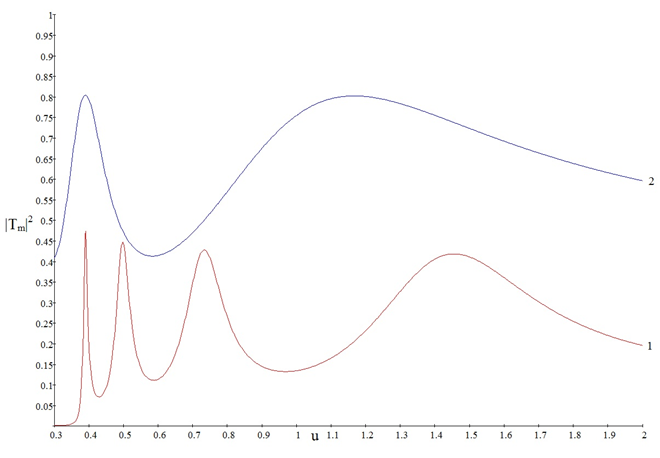 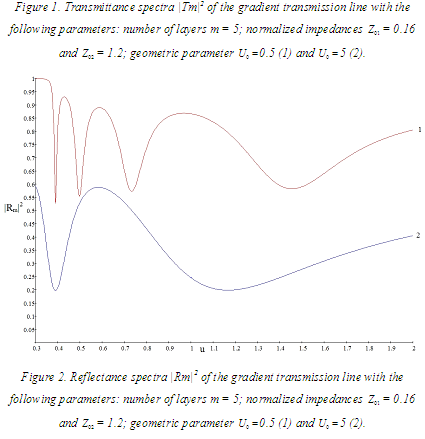 The graphs of reflectance and transmittance spectra have shown dependence of those spectra not only on frequency of the propagating wave, but also on geometric properties of the line, which opens up a possibility to design and optimize systems based on gradient transmission lines.

The advances in nanotechnology provide opportunity to create devices with previously unattainable properties, so interest in this research field is evident. Gradient metamaterials is one of the applications of nanotechnology and in perspective can be used for various next-gen technologies, like extraordinary high-sensitive optical sensors, Stealth-technologies, gradient transmission lines with unique frequency properties and others.

By virtue of mathematical models constructed on the basis of exact solutions of Maxwell’s equations, it is possible to analyze in detail the behavior of electromagnetic waves propagating along the gradient transmission lines. The results show that the processes of transmission and reflection of waves are complex and depend not only on the frequency, but also on the geometric properties of the line.