Hantaviruses, members of the genus Hantavirus (family Bunyaviridae) are rodent-borne pathogens, and the virus is transmitted to humans by inhalation of infected rodent excreta [8, p.97]. Hantaviruses cause two clinical forms: haemorrhagic fever with renal syndrome (HFRS), an endemic zoonosis of Eurasia, and hantavirus pulmonary syndrome which occurs in the Americas. In Asia (China, South and North Korea, and Far East of Russia), HFRS is caused by three hantaviruses: Hantaan virus (HNTV), carried by the striped field mouse (Apodemus agrarius); Amur virus (AMRV), carried by the Korean field mouse (A. peninsulae); and Seoul virus (SEOV), carried by the brown rat (Rattus norvegicus). In Europe human hantavirus infection is associated primarily with Puumala and Dobrava viruses.

The Primorye Region of Russia (hereafter referred to as Primorye) is located in the south of the Russian Far-East (Figure 1) bordering China and North Korea. There are at least five genotypes/genovariants of hantaviruses, namely Hantaan/Far East, Amur, Seoul/Vladivostok, Hokkaido/Shkotovo, and Vladivostok, with only the first three being pathogenic for people in the geographical region of Primorye [10, p.35-40]; the role of the remaining two viruses has yet to be clearly determined. HFRS in Primorye is characterised by annual registration and significant mortality (up to 15% in some years), especially in the rural districts (Figure 2). 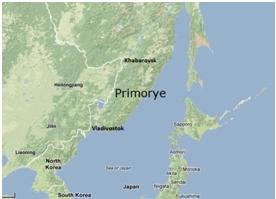 Figure 1. The location of Primorye Region of Russia 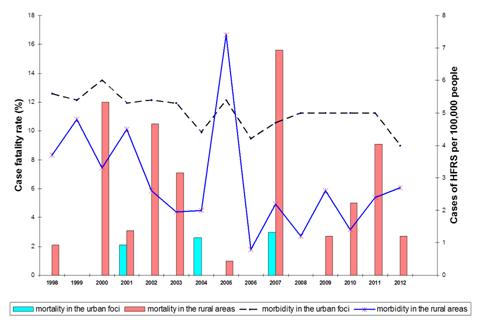 Figure 2. Long-term dynamics of HFRS morbidity and mortality in the urban and rural areas of Primorye (1998 — 2012). Bars on the graphs represent annual case fatality rate (CFR) in percent, red bars are CFRs reported in rural areas, blue bars – in urban areas. Curves represent the dynamics of HFRS morbidity per 100,000 individuals in different epidemic areas of Primorye (black, interrupted – in the urban foci, and blue in the rural foci).

Given the current epidemiological situation of HFRS due to the presence of rural foci associated with the Hantaan and Amur viruses and urban foci linked to the Seoul virus, the objective of our study was to investigate the prevalence of antibodies to hantaviruses among healthy blood donors in different areas of Primorye.

We conducted a cross-sectional epidemiological and serological survey to determine the prevalence of specific antibodies against hantaviruses in adult blood donors. The sample included 3831 individuals from 13 administrative territories of Primorye. Subjects were contacted via blood donor centers. All individuals were informed of the study, signed an informed consent form, and agreed to answer a questionnaire and donate a sample of blood for testing. The epidemiological questionnaire, previously validated by the Institutional Ethics Committee, requested information about sex, age, residency, occupation, rodent exposure at home or work, renal or respiratory disease history, and hospital admissions.

Blood samples were collected, transported, and centrifuged on the same day. Prior to analysis the serum samples were kept frozen at –20°C. An indirect fluorescence antibody assay (IFA) was performed to screen hantavirus-specific antibodies and an enzyme-linked immunosorbent assay (ELISA) was used to detect hantavirus-specific immunoglobulin (Ig) G and IgM antibodies in positive samples. A sample was regarded as confirmed to be seropositive when the serum was reactive in the IFA and confirmed by the ELISA. Data of registered HFRS patients with clinical manifestations and serologically confirmed diagnosis (n=268) were used for comparison.

The «Statistica» (version 6.0) and “BioStat 2009” software packages were used for statistical analyses. For normally distributed variables, comparisons between two groups were made using Student’s t test. Pearson’s correlation coefficients between two normally distributed variables were determined. The Spearman r value is shown. A p value<0.05 was considered to be statistically significant.

This sero-epidemiological survey revealed a hantavirus seroprevalence rate of 2.69% in the serum specimens of all examined people; this rate was similar in both rural and urban areas (3.4% and 2.8% respectively). IgM antibodies were detected in three positive sera samples indicating recent hantavirus infection in this individuals.

The sex ratios (men to women) among seropositive donors were 1:1 in urban foci and 1.3:1 in rural areas. The majority (98.3%) of those with specific antibodies were aged between 21 and 60 years.

Taking into account the high variability of HFRS morbidity in the Primorye region (see Figure 2), significant correlation between HFRS morbidity and average seroprevalence is unlikely. However, during three years of low morbidity, high negative correlation (r=-0.98) was found between morbidity and seroprevalence in rural areas. This indirectly supports the occurrence of undiagnosed or unapparent forms of HFRS. In contrast, in urban foci the detection of seropositive individuals reflected HFRS dynamics (r=0.69).

Among seropositive donors from large cities, two professional groups prevailed: white-collar workers and people working in conditions of increased dust-formation (truck-drivers and electrical, sanitary and other types of technicians), in which the seroprevalence rates were 29.2% and 27.1% respectively; the comparative frequencies in those from rural areas were 5.5% and 9.6% respectively. In contrast, the seroprevalence rate was significantly higher in construction workers from rural districts (13.7%) than in those from urban areas (2.3%). High seropositive rates were noted in cleaners (12.3%), shop assistants (4.4%), and watchmen (6.8%) from both types of areas. Of particular note, a high percentage of seropositivity among temporarily unemployed subjects was observed among urban citizens (12.5%) and in rural areas (38.3%). Remarkably, among seropositive healthy blood donors who worked in the same combined heat and power station, the number of individuals with antibodies to hantavirus was two time higher in operational staff compared with managers and office workers (10.1% versus 5.2%).

The results of this sero-epidemiological study clearly show that some HFRS cases remain undiagnosed and unregistered in both rural and urban foci of the hantavirus infection. This may be related to mild or atypical clinical forms of HFRS. In our study the detection of IgM antibodies in three healthy donors is an illustrative example of such a situation. In spite of the long history of HFRS in the Primorye region, some local health care employees remember only the classical trilogy: fever, haemorrhagia and renal syndromes, and in most rural districts only typical severe and moderate cases of HFRS are registered.

However it has been shown by many researchers that the first symptoms of HFRS are common to many viral and bacterial infections, and mild and atypical cases with transient laboratory abnormalities can occur. Analysis of preliminary diagnosis at admission to hospital has shown a very broad spectrum of different suspicions: adenoviral infection, influenza, leptospirosis, tick-borne infections, viral hepatitis, bacterial food poisoning, septicemia, etc. [1, p.56]. We also observed such atypical forms of HFRS including angina pectoris with typical changes in electrocardiography, acute appendicitis, and viral meningitis; only serological methods can confirm the true nature of these diseases.

The sex, age and professional status of seropositive donors clearly reflects previously described epidemiological characteristics of rural and urban foci of HFRS in Primorye [9, p. 75]. A high percentage of seropositive individuals among temporarily unemployed individuals (according to their statement) is probably associated with their broad activity in natural foci of infection (wild-harvesting, fishing, hunting, etc.). It is interesting that the percentage of agricultural workers among seropositive and HFRS patients is very low in comparison with results obtained twenty years ago, reflecting a significant decrease in activity in this manufacturing sector. Our results also support the hypothesis that people working in increased dust-forming conditions are at the highest risk of acquiring hantavirus infection. However, all people living or working in the natural/urban foci of hantavirus infection have a chance of becoming infected with dust contaminated by rodents’ excretes.

It is well known that HFRS associated with different and even closely related hantaviruses is characterized by some peculiar clinical properties [9, p.75]. There are three pathogenic hantaviruses in the Primorye region; however, to date no significant clinical differences among Hantaan- and Amur-infections have been described, possibly due to the registration of only severe forms of HFRS, and an inability to differentiate every case with the help of serological or molecular typing in the foci of co-circulation of two or three viruses.

In conclusion, we acknowledge that our data are limited by sero-epidemiological analysis carried out in a specific group of people (blood donors). However, the results of our study, combined with previous findings from a separate outbreak [4, p. 430, 5, p. 525], suggest that the actual HFRS morbidity in Primorye is much higher than reported. Awareness of clinicians and early timely diagnosis of HFRS are very important for the prevention of life-threatening complications in such territories as Primorye with a complex epidemiological situation. Further improvement of local diagnostics and future studies of different categories of people with an infectious pathology will provide more accurate estimates of HFRS.

We thank the blood donors for their participation and all staff at the Primorye Blood Centre, for assistance in the study. We want also to thank Irina Novikova, Laboratory of Hantavirus Infections, Somov Research Institute of Epidemiology and Microbiology, for technical assistance.

The authors declare no conflict of interest.