Introduction. Lectins, which are of nonimmune origin and are noncatalytic sugar-binding proteins, are widely distributed in the most common foods in varying amounts [5]. The most prominent antinutritional factors are the trypsin inhibitors and lectin [1], also known as soybean agglutinin (SBA). They are responsible for 40% and 50% of the growth inhibition of raw soybeans, with the remaining 10% being incomplete digestion of the protein. Native SBA is resistant to digestive enzymes in the gastrointestinal (GI) tract and has a unique property of binding to carbohydrate-containing molecules. It binds to the intestinal epithelium, which causes disruption of the brush border and poorer growth of spleen and kidneys [7]. Some lectins can cross the gut wall into circulation, generating antilectin antibodies.

The inability of dry heat treatment to fully deactivate SBA might account for detectable SBA activity in certain soy containing products. This low concentration of SBA might not be a risk to human health [1, 3]. Moist heat deactivates both SBA and trypsin inhibitors, and the hemagglutination activity can be used to measure the improvement in nutritional value of the soy protein. Readily deactivated by moist heat treatment, SBA is not a concern in the properly processed soy foods.

Soy has been grown for three millennia in Asia and, more recently, has been successfully cultivated around the world [4]. The objective of the present investigation was to isolate a soybean agglutinin and compare characteristics of stability from two variety of the soybeans Yukihomare and Iwaikuro.

Materials and methods. Two variety of soybeans Yukihomare and Iwaikuro were collected in central area of Hokkaido (Japan) by organizing field trips to that area and authentically identified.

Chromatographic media and columns including Sepharyl-200 and CM-sepharose were purchased from Tosoh Ltd. (Tokyo, Japan). All the reagents that were used in the study were of the analytical grade and purchased from Nacalai Tesque Inc. (Kyoto, Japan).

Preparation of Seed Extracts. Soybean was defatted by stirring with 10 vol. light petroleum (b.p. 400 — 600C), filtered, and the remaining solvent was removed by drying in a fumecupboard at room temperature. The defatted seeds were stirred with phosphate-buffered saline overnight at 40C, centrifuged at 13000 rpm for 10 min and the supernatant was retained.

The protein was obtained by adding solid (NH4)2SO4 to the supernatant solution to 70% saturation. The precipitated protein was collected by centrifugation at 10000 prm for 15 min, dissolved in 2 ml of 100 mM Phosphate buffer, pH 7.0 and used as crude protein extract, stored at 40C. The crude extract obtained was subjected to gel filtration chromatography on Sepharyl-200 column (2.5x50cm) was previously equilibrated with 100 mM Phosphate buffer, pH 7.0 and the proteins were eluted with the same buffer. Different fractions were collected and checked for hemagglutinating activity.

CM-sepharose chromatography. Further purification of the active protein fractions obtained from the gel filtration was carried out by ion-exchange chromatography on CM-sepharose column. The active protein fraction obtained from gel filtration was dialyzed against 25 mM Acetate buffer, pH 4.5 for 18 hrs. It was then applied carefully with the help of an applicator to the column (20×2 cm) which was pre equilibrated with 25 mM Acetate buffer, pH 4.5, and the bound proteins eluted by a linear gradient of NaCl (0-0.5 M, total 500 ml) in the same buffer. Each fraction was checked for protein by measuring absorbance at 280 nm and checked for hemagglutinating activity. Active fractions were collected and pooled.

Protein concentration. Protein estimation at each step of purification was carried out by the method of Lowry using bovine serum albumin as the standard protein [2].

Effect of pH on activity of SBA. The pH dependence of SBA was examined by using buffers ranging from pH 2-12. The buffers used were glycine-HCl for pH 2 and 3, acetate buffer for pH 4 and 5. Citrate buffer was used for buffer with pH 6. Phosphate buffer was used as buffer for pH 7 and 8, and for pH 9, 10 and 11 glycine–NaOH used. Because red blood cells would lyse when the pH was <5, samples that have pH values of <5 were tested in way: was to adjust the pH back to 5-6 using PBS buffer (phosphate-buffered saline, 0.1 M phosphate, 0.9 % saline, pH 8.0) immediately before the test.

The effect of denaturing agents such as urea and guanidine hydrochloride was examined on SBA activity. In this experiment, a wide range of concentrations of denaturants from 0.5 to 8 M at 0.5 M interval was used. After incubating in a microtitre plate at 37ºC for 1 hour, the samples with GuHCl and urea were subjected to the hemagglutination assay to examine the effects of the denaturing agents on SBA activity.

Purification of soy proteins. Ten milliliter of crude protein extracts which was 70% saturated with ammonium sulphate, concentrated by centrifugation and added 100 mM Phospahate buffer, pH 7.0 up to 2 ml was applied on Sepharyl-200 (2.5×50 cm) previously equilibrated with the same buffer. In gel filtration the crude protein preparation resolved into two peaks – I, II and III, the chromatographic profile of which is shown in Fig 1. The fractions under peak II showed lectin activity and these were pooled, concentrated, dialyzed against 25 mM Acetate buffer, pH 4.5 and chromatographed onto CM-sepharose column for further purification. The fractions under peaks I and III were discarded and were not used for further analysis as they possessed no significant biological activity.

The pooled and dialyzed fractions were then applied on CM-sepharose column pre equilibrated with 25 mM Acetate buffer, pH 4.5. The bound protein was eluted with a linear sodium chloride gradient of 0-0.5 M. The protein of Yukihomare seeds eluted in tree peaks and two peaks for the protein of Iwaikuro seeds, but only last peaks showed the agglutinating activity. 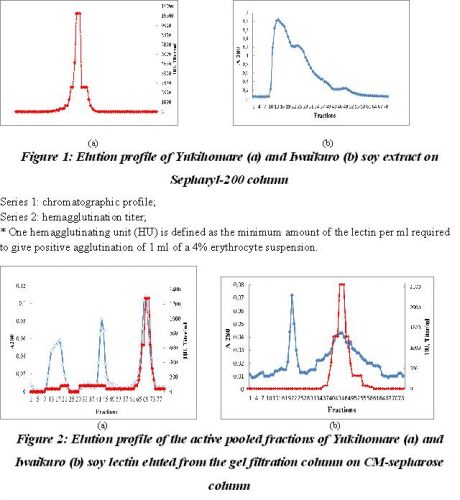 * One hemagglutinating unit (HU) is defined as the minimum amount of the lectin per ml required to give positive agglutination of 1 ml of a 4% erythrocyte suspension. HU is expressed as mg of lectin per ml of the protein solution.

The ion-exchange chromatographic profiles are shown in Fig 2. The purified Yukihomare and Iwaikuro lectins (SBA) thus obtained were showed a fold purification of 8.0 and 10.3, a yield of 20% and 27% respectively (Table 1). The purified lectins were established by polyacrylamide gel electrophoresis in which the protein moved as a single band indicating that the preparation is pure.

Partial purification of agglutinin from soybean seeds Yukihomare and Iwaikuro

Molecular weight of the Proteins. The sample fraction of the last peaks obtained from ion-exchange chromatography were run on 12.5 % SDS-PAGE in presence of the ß-mercaptoethanol and yielded a single band corresponding to the molecular weight about of 31 kDa (Fig. 3).

It was found that N-acetyle-D-galactosmine is a strong inhibitor (3.12 mM) for both soybean lectins among the studied sugars. Lactose and raffinose were inhibitory in 100 mM concentration for Iwaikuro lectin and 200 mM for Yukihomare lectin, respectively. D-ribose, melibiose were inhibitory in 200 mM and D-fucose in 25 mM respectively for both soybean lectins. Also D-galactose was inhibitory at 6.25 mM. Other sugars such as D-glucose, D-fructose, sucrose, D-mannose, D-cellobiose, D-xylose, maltose, N-acetyl-D-glucosamine, and D-sorbitol were non inhibitory up to 200 mM concentration.

Figure 3: Determination of molecular weight of the protein by SDS–polyacrylamide slab gel electrophoresis on 12% gel staining with Commassie brilliant blue, pattern of lectins of Yukihomare (a) and Iwaikuro (b) seeds.

Denaturing agents like urea and guanidine hydrochloride denatured SBA in great extent at higher concentrations. Urea with higher concentration than 6.0 M decreased Yukihomare lectin activity and higher 5.0 M for Iwaikuro lectin activity. In the case of guanidine hydrochloride at 3.0 M decreased Yukihomare lectin activity and 2.0 M for Iwaikuro lectin respectively. Denaturation by these agents indicates the globular nature of protein, which gets stabilized mainly by hydrophobic interactions.

Conclusion. Yukihomare and Iwaikuro seeds are landraces soybeans from Hokkaido. Soybean lectins were isolated, purified and partly characterized in terms of its sugar specificity and thermal denaturation properties. The SBA of both seeds is specific for N-acetyl-D-galactosamine and to lesser extent as D-galactose was indicated by the sugar inhibition tests. The purified protein moved as a single band on SDS-PAGE. Many lectins are relatively stable against heat denaturation and denaturing agents, but the lectin of Iwaikuro soybean is less stability for inhibition assay. This result provides useful information on SBA food chemistry, structure and biological activity.

Acknowledgements. The author gratefully acknowledges Dr. F.Yagi and Japan-Russian Exchanges Center for support of this research.