Fuzzy logic was first proposed in 1965 as a way to imprecise data by Loft Zadeh, professor at University of California.]. Fuzzy logic is methodology to represent and implement human’s knowledge about how to control a system [8]. In fuzzy logic, knowledge can be captured in terms of rules and linguistic variables.

Fuzzy inference systems (FIS) are rule-based systems with concepts and operations associated with fuzzy set theory and fuzzy logic [8]. These systems are mappings from an input space to an output space. Therefore,they allow constructing structures that can be used to generate responses outputs) to certain stimulations (inputs), based on stored knowledge on how the responses and stimulations related. The knowledge is stored in the form of a rule base, i.e. a set of rules that express the relationsbetween inputs of the system and expected outputs. Sometimes this knowledge is obtained by eliciting information from specialists, in which case these systems are usually known as fuzzy expert systems [2].

Fuzzy logic, which reproduce the approximate reasoning process of the human mind byrepresenting  knowledge via linguistic if-then rules, allow for precise output inference starting from imprecise input [8]. The aim of this paper is to describe different types of fuzzy logic systems that could be used for the evaluation the document ranking score.

Usually an information retrieval system returns large result sets and the users must spend considerable time to find items that are really relevant. Moreover, documents are retrieved when they contain the index terms specified in the queries [4]. However, this approach will neglect other relevant documents that do not contain the index terms specified in the user’s queries. Number of document retrieval from Automatic Information Retrieval. Multi agent modeling (as will be explained in section 2.3)  areused in this paper for ranking score to make decision .This decision making helps user to choose the best documents with his quires

In this paper, we use fuzzy logic to evaluate number of documents (ranking score). The evaluation is using cosinesimilarity methodbetween the query as a search engine and the retrieval document result from Automatic Information Retrieval Multi agent modeling.

Fuzzy inference is the process of formulating the mapping from given input(s) to output(s) using fuzzy logic. A fuzzy inference system as shown in figure (1) .It has four main parts: (1) Fuzzification interface simply modifies and converts inputs into suitable linguistic values so that can be compared to the rules in the rule base. (2) Knowledge base containing Rule base, holds the knowledge in the form of a set of rule andalso a number of a database which defines the membership functions of the fuzzy sets used in fuzzy rules. (3) Inference mechanism, evaluates which rules are relevant at current time and then decides what the output should be. (4)Defuzzification interface, converts the conclusions reached by the inference mechanism into crisp output [5], [3].

The most common types of fuzzy inference that have been introduced in the literature and applied to different applications are Mamdani and Sugeno type models [8], [2], [3] and  [7] The most fundamental difference between Mamdani-type FIS and Sugeno-type FIS is described in the following section.

The most fundamental difference between Mamdani type FIS and Sugeno type FIS is the way the crisp output is generated from the fuzzy inputs. While Mamdani FIS uses the technique of defuzzification of a fuzzy output, Sugeno FIS uses weighted average to compute the crisp output. Therefore in Sugeno FIS the defuzzification process is bypassed [4]. Other difference is that Mamdani FIS has output membership functions whereas Sugeno FIS has no output membership functions. Mamdani FIS is less flexible in system design in comparison to Sugeno FIS. Mamdani method is widely accepted for capturing expert knowledge. It allows us to describe the expertise in more intuitive, more human-like manner. However, Mamdani-type FIS entails a substantial computational burden. On the other hand, Sugeno method is computationally efficient and works well with optimization and adaptive techniques, which makes it very attractive in control problems, particularly for dynamic nonlinear systems. These adaptive techniques can be used to customize the membership functions so that fuzzy system best models the data [3], [7].

The purpose of the multi-agent system is to aid users in searching and retrieving information available on the World Wide Web. A system devoted to perform automatic information retrieval might encompass four  main steps: (i) Searching the world wide web with keyword, (ii) Extracting the required information from web sources (iii) Mining the texts that extracted from the web by using automatically rapid miner (iv)  And   at the end Storing output result of multi-document using term weight in database (excel file). Agents are java agent development environment (JADE).JADE agents capable of (i) interacting exchanging FIPA-ACL messages, (ii) sharing a common ontology in accordance with the actual application, and (iii) exhibiting a specific behavior according to their role 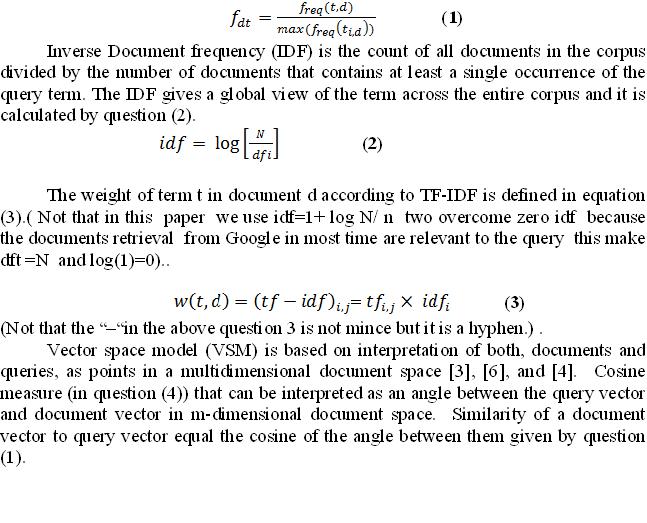 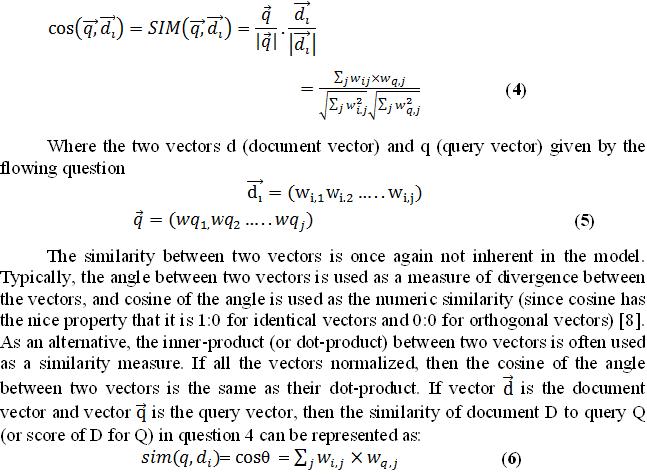 In a FIS, a rule base is constructed to control the output variable. A fuzzy rule is a simple IF-THEN rule with a condition and a conclusion.  In the following rules will be derived from a common knowledge about information retrieval and the tf-idf of w (d,t) and  w(q,t))  weighting .

The rule are the following:

We will sum upon this part as shown in block diagram in figure (2)whatwill bedone: 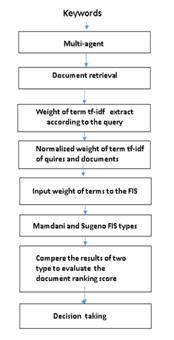 The experiment evaluation was carried out in MATLAB platform, Mamdani-type FIS and Sugeno- type FIS and a sample of the documents retrieval from multi-agent. The experiment was run to evaluate the ranking score of relevant documents using question (6) and keywords query as (computer science.)

The proposed FIS for the evaluation documents  rankingscore consists of four inputs  ( two  for weigh term of document and two for weight term in the query) as shown in figure 3.1 w(t1,d),w(q,t1),w(t2,d),w(q,t2). The system has one output that indicates score of document. Each of the selected input and output variables is described by a set of two linguistic fuzzy values (low and high) defined by triangle membership function, thus allowing the fuzzification procedure to convert the measured numerical value into one of the fuzzy values.Figure3.2 shows one of the input w(q,t2)  triangle membership function .and figure 4shows output  score (cosine similarity) triangle membership functions. In the experiment the input processed by Mamdani-type fuzzy inference system using triangle membership function and rules as described in section (2.5) and as was shown in figure .3.1.The input for the defuzzification process was the aggregate output fuzzy set (of sum after applied rules in section 2.5) and the output set was a single number(centroid value) as shown in figure 4A and figure 4 b.The document in figure 4 f was highest score (centroid value 0.666) but the document in figure 4awas the lowest score (centroid value 0.573) .  The plots obtained after simulating Mamdani-type of FIS for document similarity cosine score were shown in figures. 4 c and figure 4 d . 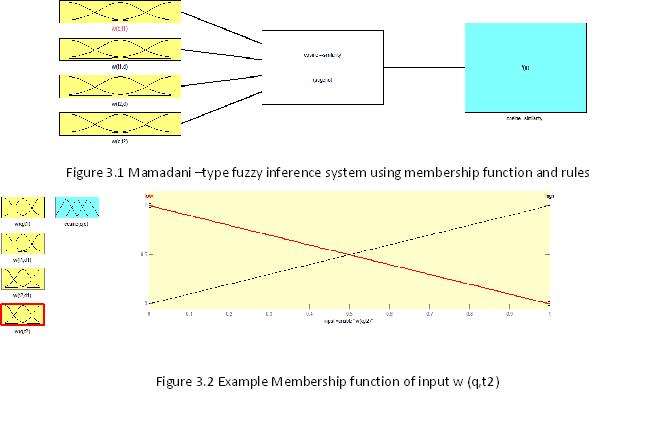 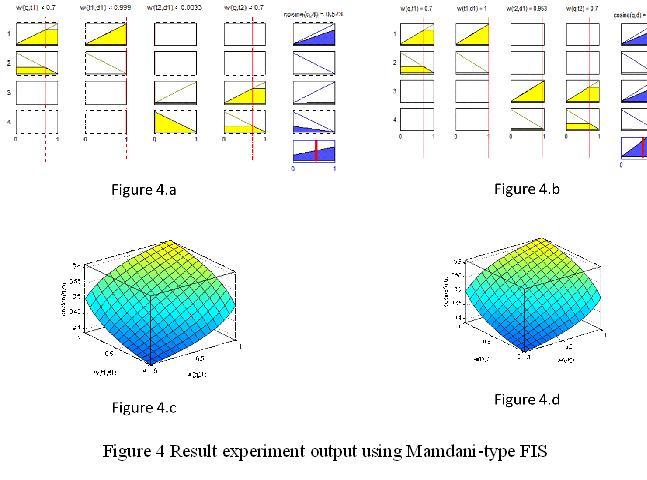 The initial steps and the setting of Sugeno-type FIS aresame as of Mamdni-type FIS. It also consists of four  inputs( two  for weigh term of document and two for weight term in the query) as shown in figure 5  w(t1,d),w(q,t1),w(t2,d),w(q,t2). and produces one output thatindicates the  similarity or the ranking score ( cosine) . Each of the selected inputvariables is described by a set of two linguistic fuzzy values,defined by triangle membershipfunctions in the case of Mamdani-type fuzzy inference system(as already shown inFigs3.2). Unlike the output value range of the Mamdani-typefuzzy inference system, the range of Sugeno-type output isbetween 0 and 1.The output of this system can only be eitherconstant or linear in this FIS, so two linguistic fuzzy values for the output are “Low”, and “High” which can be constant low score 0 and high score 1. The rule base for Sugenotype FIS is the same as for Mamdani-type FIS as shown in section 2.5. 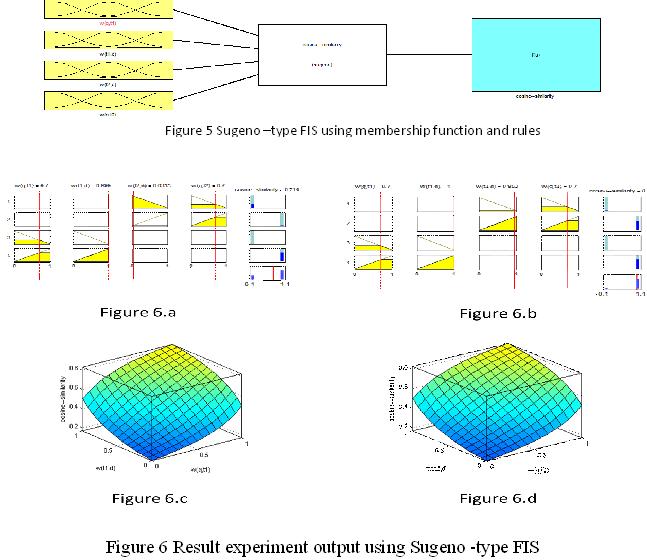 As illustrates in the figures above, both inference systems (Mamdani-type and Sugeno-type) responded to operational changes of the inputs and obtained output same result of document ranking score. However, the Sugeno-typeFIS has betterresults (cosine score) than that of the Mamdani-type FIS for documents evaluation.  From these simulation results. The differences between Mamdani type FIS and Sugeno type FIS are: (1). the way the crisp output is generated from the fuzzy inputs. (2). Mamdani FIS has output membership functions whereas Sugeno FIS has no output membership functions.

It has been concluded from this paper that for the evaluate document ranking score using similarity method (cosine), Mamdani-type FIS and Sugeno-type FIS works similarly. Membership functions and rules are same for both the FIS, only difference is that output membership functions for Sugeno-type FIS can only be either constant or linear and also the crisp output is generated in different ways for both the FIS.Sugeno-type FIS is better results better than Mamdani-type. Both the models are simulated using 4rulesand four input membership Functions. Also only one output value (centroid value) is used.in the case of Mamdani-type FIS and (average weight value) in the case of Sugeno-type FIs for document ranking score.

[2] Kamboj.V and Kaur. A Comparison of Constant SUGENO-Type and MAMDANI-Type Fuzzy Inference System for Load Sensor:International Journal of Soft Computing and Engineering (IJSCE) ISSN: 2231-2307, 3: (2), May 2013.

[7]Shleeg. A and  Ellabib. I  Comparison of Mamdani and Sugeno Fuzzy Interference Systems for the Breast Cancer Risk : World Academy of Science, Engineering and Technology, International Journal of Computer, Information, Systems and Control Engineering  , 7:(10), 2013.