Under socio-economic policy framework on the land use, this planning is processed in accordance with Law of Mongolia on Legislation on Regionalized Management and Coordination (2003) adopted by Mongolian Great Khural in priority, Medium-Term Program for Development in the Western Region, projects and proposed activates with regard to the these projects implemented in field of human habitat settlement, administrative reform, agriculture, transportation, tourism, industrialization and environmental protection by Millennium Development Goals, Mongolian Government, regional and local authorities and foreign aids as well as the Master Plan for Land Management of Uvs Aimag approved by the Ministry of Road Transport and Urban Development.

Zero point of the urban has been unplanned for long time, and there is the traditional way to select land to live instead of the planning. And urban development and its expansion have been made by the urban development planning. Therefore the zero point of urban should be defined by the Land Management Plan. As result, the principle for implementing the transfer of the unified land territory provided in the Law on Land from one to other by authorized organization will be implemented and groundless expansion of the urban zero point is able to be limited.

The goal is to study the land use situation, to process the planning and to define the land use and regionalization of the Ulaangom city, Uvs.

The Functional Land Management Plan is processed based on geographical and management science theory and analysis of socio-economic development. Environmental assessment of territory of Ulaangom city is done based on following fundamental researches.

When functional land use region is planned, environmental condition and resource assessment of the region, climate, water supply, soil an plant is considered as ecological friendly, economic profitable and social efficient.

Ulaanbgom city is 1450 km of Ulaanbaatar. It has city status. This city is a center of local development center and a center of Ulaangom soum. The Ulaangom city is divided into 7 Bags. There is combination of the Ger district and construction buildings in the territory of the most bags.

By the resource assessment for urban area, there is result that the land is suitable for ground vibration, limited suitable for surface, engineering and geology, and suitable for factor of permafrost, soil water level, supply and elevation.

For considering the Unified Land Territory Use of Ulaangom soum for last 5 years, the agricultural land was decreased with 6.5 hectare while urban area was increased with 6 hectare and road and network area is increased with 0.5 hectare. It is related to population growth in urban and infrastructure development.

The land area of the ger district and buildings was increased with 21-89,96 hectare area for the current situation of urban land use. This rate shows settlement range has been expanded. Even though the urban area has been increased slightly in 5 years, the urban spatial structure should be defined and planning should be planned under the land use and planning norm and standards. The urban and other settlement area were increased with 0,01 percent from 2010 to 2015. For land use and purpose, land area of Ger district was increased with 89,96 hectare in connection with classification of urban and other settlement, social needs and economic development.

There are construction areas in the central and eastern region of city for the land use of Ulaangom. The Land use and environmental landscaping are good because the construction area including production, services, public administration, art and cultural buildings and residential districts are built in accordance with the Master Urban Development Plan. However, distribution of residential building area located in the eastern side of the city is good but there is lack of environmental landscaping development. There is small green area in construction area and central streets. The Ger district and construction area combines in those locations. Land contamination with petroleum and oil is relatively low because all area around petrol stations is paved. When spatial databases and non- spatial databases of the land database as of November of 2015 is classified, evaluated by spatial analysis and geostatistical methods. Current land use is disordered and urban spatial structure is unclear. 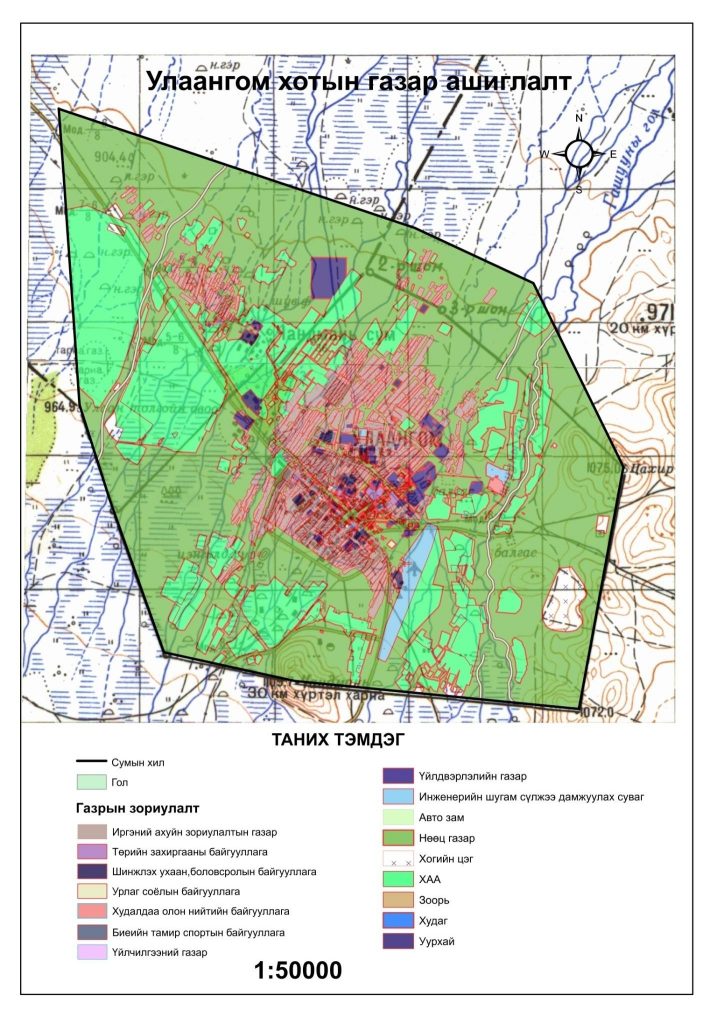 The land use classification and role of regionalization 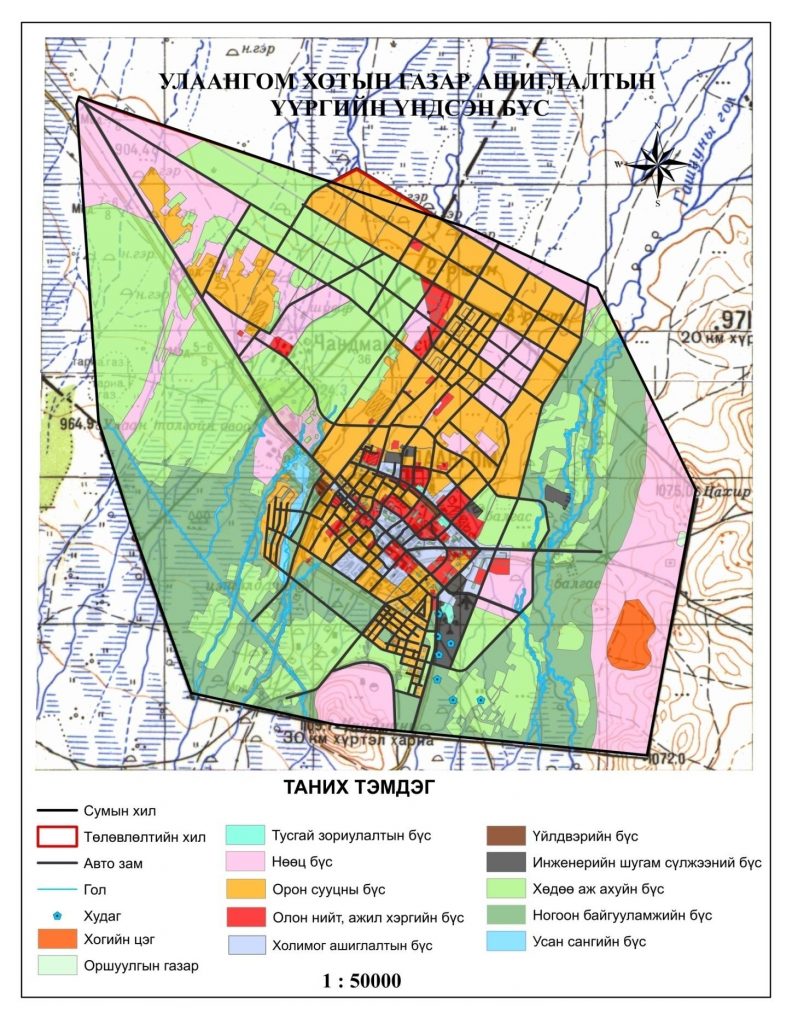 The interests of ecology, urban development, public and organizations conflict with each other and difficut situation related to the land use has been arisen. Because land owning, possessing and using process in urban range or their close neighboring areas don’t follow the laws and regulations. In order to avoid this situation, the land management regions should be defined followed.

The public and business region covers 145,58 hectare or 2,5 of the planning area. It is planned into 4 sub-regions mentioned in below.

Hospital sub-region: Demand of public and private hospital, health clinic and family hospital is considered using demand assessment processed by geographical information system and environmental regionalization approach in according to the construction standard for urban, settlement and town planning. /sufficiency and location of the hospital/

Figure 3. Sufficiency and location of the hospital

Trade and service sub-region: Banks, trade centers /foods and goods/ and pharmacies etc… are planned in this sub-region on basis of principle of all in one place.

Culture and public entertainment sub-region: Theater, cultural center and museum etc… are planned next to the apartment residential region in this sub-region in order to provide opportunity to residents of the Ulaangom city to spend their time properly.

3.Industrial region: This sub-region is separated from residential region by green area and located bottom of the wind direction in outside of special protection and hygiene zone of river. This region covers 7,66 hectare area or 0,1 percent of the planning region. It is planned as the light industrial region.

4.Green area region: The green, recreation, open field with natural soil are planned in this region in order to improve scenery of the city. This region covers 1147,84 hectare area or 20 percent of the planning area and planned with 4 sub-regions mentioned in below:

5.Combined land use region: Areas which includes apartments, public service, business, industry, service and green area cannot be included into same region is planned in this region. This region covers 81,23hectare area or 1,4 percent of the planning area.

7.Agricultural region around the city: This region covers 1657,97 hectare area or 29,4 percent of the planning area and it includes area which is involved into sub-region of the agriculture by classification of the Unified Land Territory. Significant amount of potato, vegetables and sea buckthorn are planted in surrounding area around Ulaangom city.

8.Reservoir region: Places included to water territory classification places of the Unified Land Territory and newly planned artificial lake, current deep well and portable well are planned in this region. This region covers 141,27 hectare area or 2,5 percent of the planning area. The artificial lake is planned in rain water much staying area with mug caused by geographic characteristics and geomorphology in order to improve regional scenery and build favorable environment.