A lumbar stenosis is sometimes accompanied simultaneously by various diseases in the thoracic region: stenosis [3, 7, 8], disc herniation [14], arachnoid cyst [17], tumor. [2, 10, 11] In cases of pronounced clinical symptoms due to the lumbar stenosis, supported by imaging data, an operative decompression of the affected lumbar levels is performed. Subsequently, in these patients, an aggravation of the neurological symptoms occurs due to the thoracic lesion. [2, 10, 11, 14, 17]

In this publication, we describe two cases of patients with a pronounced lumbar stenosis combined with tumors in the thoracic region, in which both lesions were diagnosed simultaneously. In world literature thus far, there have only been four cases of such a combination, and the compression in the thoracic region was discovered after the lumbar decompression and aggravation of neurological symptoms.

Case №1. A 47 year old woman had suffered years of pain in the lower back and both legs. Following, a progressive weakness of the lower limbs, more pronounced in the left leg, began 20 days ago. She was admitted to the emergency unit of a local hospital with complaints of swelling, abdominal pain and constipation. The neurologist on duty established a weakness in her legs, more so in the left leg, and lively ligament-periosteal reflexes. A computed tomography (CT) of the L3-S1 levels showed a degenerative narrow canal at the L3-5 levels. For this reason the patient was transferred to the Department of Neurosurgery at the «St. George» University Hospital in Plovdiv, Bulgaria. The neurological status at the time of admission was presented by a pronounced lumbar vertebral syndrome, bilaterally (+) Lasègue, pain and numbness in the L5 and S1 dermatomes on the left, lower spastic paraparesis, more pronounced in the left leg (muscle power: L=2/5; R=4/5), lively knee but absent Achilles’ reflexes, and conduction hypoesthesia distally from Th12. There were no disturbances in the functions of the pelvic reservoirs established.

Case №2. A retired lady of 62 years had years of low back and spine pain. During the last year, the pain had become constant, her legs had become numb and a weakness of both feet had appeared. Walking had become difficult and the use of a cane had become necessary several months ago. She had also begun to rest every 10 meters when walking. During the admission to the hospital, the status of the patient was presented by a vertebral syndrome of the thoracolumbar segment, hyperalgesia and hypoesthesia for dermatomes L4, L5 and S1 bilaterally, weakened knee and Achilles’ reflexes, peripheral paresis for nn.fibulares et tibiales, lower central paraparesis (Grade III) and conduction hypoesthesia for superficial sensation distal from the inguinal folds. She is married with two children and has high blood pressure.

The study of the lumbar cerebrospinal fluid in the first patient showed increased protein levels – 1.63 g/l. Immediately after the study, an aggravation of the lower paraparesis was noted. Magnetic resonance imaging (MRI) found a right lateral extramedullary tumor on the level of Th9-10, causing significant compression of the spinal cord, as well as an expressed stenosis on the L3-4 levels and a more severe stenosis on the L4-5 levels with ossification and hypertrophy of the yellow ligament, thickened joint surfaces, marginal ostephytes prominating into the canal of the nerve root and a significantly narrowed central canal. (Figure 1) 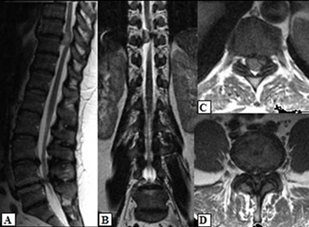 The CT study of the second patient found spondylolisthesis and a significantly narrowed nerve root and central canal due to the listhesis and spondylosis of the intervertebral joints on the L4-5 levels, and on the Th11-12 levels – an intradural extramedular tumor with calcium deposits. (Figure 2) The MRI confirmed the CT findings. (Figure 3) 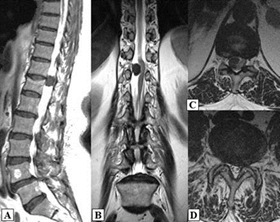 Two subsequent surgeries were performed for each of the patients. In the first patient, the first operation was a total extirpation of the tumor on the levels of Th9-10. The histological study found evidence of a psammoma body version of a meningioma. Ten days later, a bilateral decompression of the roots and cauda equina on the level of L4-5 was preformed.

In the second patient, due to the significant pain syndrome and the peripheral paresis of nn. fibulares et tibiales, the decompression of the lumbar stenosis was performed first. After 10 days, a second surgery was carried out in which the 1.5-2 cm intradural tumor on the level of Th11-12 was removed. The histological result was a meningioma with calcium deposits.

In the first patient, a regression of the lower paraparesis and sensory deficits was found after the operative interventions. The paresis of the dorsiflexion and plantar flexion of the left foot persisted. The follow up after one year found a significantly reduced motor deficit – Grade II according to the modified scale of McCormick and restored muscle tone in the legs. The patient is now able to walk long distances without pain. There is residual hypoesthesia in the area of S1 dermatome, an absent Achilles’ reflex, as well as a slightly inhibited plantar flexion of the big toe, all on the left side. The patient can perform her professional duties without difficulty. The control MRI confirmed the extirpation of the tumor and the decompression of the L4-5 levels. (Figure 4) 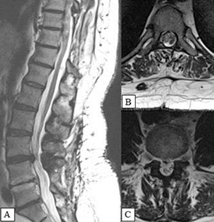 In the second patient, there was a significant reduction of the pain, the vertebral syndrome and the paresis of nn. fibulares et tibiales immediately after the first operation. A mild hypoesthesia in dermatomes L4-S1 persisted bilaterally. One month after the second operation, the central paresis decreased to McCormick Grade II.

Meningiomas represent 25-46% of all primary spinal tumors. They are more common in women (3-4.2:1) of middle age (40-60 years), usually in the thoracic region (67%-84%) and the time of debut to diagnosis ranges from 1 to 2 years. [4, 9] They have a slow growth and the symptoms depend on the localization of the tumor in regards to the level of the spinal cord. [6] The fact that the right-sided meningioma in the first patient led to a more severe paresis opposite in the left foot is an exception to the general rule, for which we found no analogue in literature.

Literature reports on the coexistence of a clinically and diagnostic imaging expressed lumbar pathology (herniated disc and/or stenosis) and a meningioma in the thoracic area are extremely rare. [2, 10, 11, 14] (Table 1) In these cases, due to the untimely diagnosis of the tumor, a surgery in the lumbar area was performed, after which the neurological deficit worsened over a period of 6 to 120 days, which according to the authors, was due to the dynamic change of the cerebrospinal fluid flow after the decompressive surgery. [2, 10, 11, 14] In support of this statement was also the aggravation of the lower paraparesis in our first case after the lumbar puncture.

Table 1. Cases of lower paraplegia due to an undiagnosed thoracic meningioma, after decompressive surgery in the lumbar area

Lesions in the thoracic region are relatively rare, a reason for the greater attention given to the much more frequent lumbar pathology and they are often missed. [1] The undiagnosed thoracic lesion in patients with simultaneous compression of the spinal cord and cauda equina is due to the combination of symptoms of central lesion (spasticity and hyperreflexia), amongst the symptoms of peripheral damage to the nerve roots of cauda equina (pain, reduced ligament-periosteal reflexes and muscle hypotrophy). [14] In the first of our cases, due to the long history, the deficit caused by the compression of medulla spinalis was more expressed. This made possible the determination of the lower spastic paraparesis and the sensory level during the examination, though they were veiled by the clinical symptoms of the lumbar stenosis.

In the second case, amongst the vertebral syndrome, claudicatio intermittens, bilateral radiculoalgy and radiculopathy with a motor deficit, were found signs of myelopathy – mildly expressed spastic paraparesis and conduction hypoesthesia. A similar clinical presentation is observed in tumors in the region of epiconus medullaris (Th10-L1), which can be overlooked in cases of significant pathology in the lumbar area with similar symptoms. [3, 14-16]

The diagnosis of the tumor before it has led to an irreversible neurological deficit is important, both for the recovery of the patients as well as for the possibility of a less invasive surgery. [12] The distinction of the symptoms caused by tumors in the thoracico-lumbar region from those caused by lumbar disc hernias or stenoses is difficult when based only on the clinical presentation. [5] The similar clinical presentation may cause a delay in the diagnosis of months and years. [13]

In order not to miss the presence of a lesion of the spinal cord, an examination of its functions is always necessary as well as an MRI, especially in cases when the lumbar CT cannot explain the clinical symptoms in a patient.