The treatment of burns and their consequences used to be a challenge since ancient times. Burns often lead to hypertrophic scars and deformations, which should be treated simultaneously with the main disease. The prophylaxis consists of atraumatic approach, proper treatment of fresh burns and post-operative prophylaxis. In the past functional deficiency was the basic reason for surgery. Nowadays the aesthetic result is of no less importance for the social adaptation of the patient.

For a period of eight years (2007-2014) in Department of Plastic, Reconstructive and Aesthetic Surgery at “St. George” University Hospital in Plovdiv we have performed 431 surgical interventions of patients with hypertrophic scars and contractures. 45 of them underwent more than one surgery. In most cases we undertook surgery approximately two years after the fresh burn. In cases of severe functional changes on the neck, major joints and face we undertook surgery right after their formation.

We divided our patients by demographic signs – sex and age.

According to aetiology we analyzed the causes for the fresh burn. Here is the classification – flame burns, scald injuries, electrical, chemical and contact ones.

The defects are usually located in the following areas: head, neck, upper limb, body, axilla, lower limb. There is a separate class of surgical patients with more than one location.

Another division is the one based on the hospital stay – short duration (up to 5 days), medium duration (5-10 days) and long duration (over 10 days).

We analyzed the data of all our patients according to the used surgical technique as well. We practiced excision and direct closure, skin grafting, flaps, expander technique, lipofilling, dermabrasion and various combinations of these techniques. We present Z-pasty as a separate procedure of the PNL because of its frequent use. Besides we oversaw the contractures, keloids and syndactyly as burn consequences.We used the following clinical methods – case history and objective physical examination. Diagnostic methods – laboratory tests.

We practiced excision and direct closure in patients with limited defects. We removed hypertrophic tissues by using scalpel and scisors. We indispensably removed the connective tissue fibers from each wound bed regardless of the used surgical technique afterwards. After undermining the we sutured without pressure.

We practiced free skin plasty as a split-thickness skin graft (STSG) and a full-thickness skin graft (FTSG). As donors we used mainly the inguinal, retroauricular area and the supine surface of the brahium, followed by drainage perforations, fat tissue removal and stapler fixation on the anticipatory wound surface. This technique is used basicly on functional areas such as the face and the hands.

Split-thickness skin graft are (STSG) used mainly in cases of extensive cicatricial changes. They are taken into electrodermatom, perforated and fixed. We applied a sterile ointment bandage with Bactigras in both types of transplants.

The flaps are the main surgical technique in our study. We used mainly local flaps (rotation, transposition, advancement) as well as transposition of triangle flaps (Z-plasty) with symmetric and non-symmetric figures. Pedicle flaps were formed as forearm flap, frontal flap, parascapular flap etc. We adhered the ratio length/width from 1:1 to 2:1 in well vascularised areas such as the upper limb and the face.

We usually used Z-plasty in order to release contractures. In general section, mostly located on brides, we form general figure containing two or more opposite triangles. Thus the towing line of the scars is interrupted. More frequently we formed symmetric figures with equal side length and same angles. We use non-symmetric figures only in cases of insufficient skin resources on one of the sides. In such cases the sides are equal as well, but the angles are of different size.

We used expander technique in cases of post-burn alopecia, reconstruction of neck and face and deformations of limbs. We used square and crescent-shaped expanders. Filling the expander after the insertion takes about two months. In all cases we put 10% of the volume intaoperatively and then practiced hyperexpansion.

This is a widely used combination of surgical methods, because the surrounding tissue is modified, the defect is wide and there is a necessity of several surgeries. The major combination is the one of flaps and skin grafting technique.

The frequency of post-burn consequences is presented in the following table:

According to aetiology of fresh burns the relation is as follows: 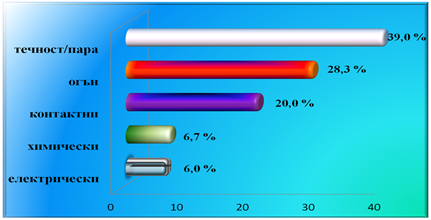 In children the most common reason for formation of post-burn hypertrophic scars is hot scald burns (47,17% of the children), and in adults – flame burns (32,62% of the adults).

According to localization the most frequent surgeries are on the upper limb, the head and the lower limb. 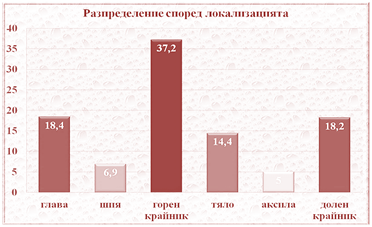 The damages are mainly on the upper limb (37,2%), followed by the damages on the head (face and capilitium) and the ones on the lower limb. Another localization is the neck (6,9%). Post-burn consequence on the body have been observed in 14,4 % of the patients. We examined particularly the axilla because of its specific localization and surgical approach – (6,9%).

In adults the difference is not statistically significant, but as compared to children it is of statistic significance Р<0,05 (χ²=24,971), where children prevail upon adults.

We analyzed the results on the basis of the types of surgical techniques, the usage of which are shown in the table below: 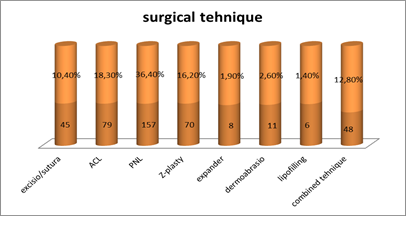 We analyze the Z-plasty separately from the free skin plasty because of its frequent use.

In Z-plasty we found statistically significant difference – children are three times more as compared to the adults Р<0,05 (χ²=22,862). In the other surgical methods there is no such a relation.

Irrespective of the aetiology of fresh burns the basic surgical method is the PNL (local flaps and Z-plasty).

There is a statistically significant difference when comparing the data concerning sex and aetiology. Electrical injuries are observed in 92,3% of the men and only in 7,7% of the women.

In all cases of different localization the main surgical technique is local flaps. Only in cases located on the axilla we mostly used split-thickness skin graft.

Table №9 Relation between the localization and the surgical technique

The difference between PNL and the treatment of keloids and syndactyly we find statistically significant. Z-plasty is the basic technique in treatment of contractures. In surgeries of the upper limb 42,4% (53 patients) the used technique is local and distant flaps.

Table №10 Complications according to the surgical technique

In the cases of complications when patients were not operated they were treated conservatively practicing monitored secondary epithelization. In cases of re-surgery of the complications we used flaps and skin-grafting.

The treatment of the trauma should start in its earliest stage and last long after the end of the basic recovery process, in order to reduce the extend of the post-burn consequences (6). We should analyze it with respect to its complexity, concerning its functionality and its aesthetic side as well, which is of great importance as regarding the social adaptation of the patients.

There are different controversial opinions about the surgeries of hypertrophic scars. Brown believes that the surgery should be done as early as possible after the formation of the scar (7). On the other hand Limberg claims thet the early treatment of immature scars leads to recurrences and more contractures (9).

Taking into consideration the higher percentage of the contractures we practiced early surgical treatment during the first year after the trauma in cases of contractures, microstomia and ectropion. In all other cases we undertook surgical corrections averagely 2 years after the trauma.

The percentage of children with post-burn consequences is 45% (189), and in 77 (40,7%) of the cases we found contractures leading to various locomotory restrictions. In children the most common localization is the one on the upper limb (97) 51,3%, which fact reaffirms the oppinion of Barhudarova that in 40-60% of the hypertrophic deformations in children functional disorders are observed as well (1). According to Povstyanoy (5) contractures are the most severe post-burn complication and they are about 3-10% in adult patients. According to our data contractures are 127 (29,5%). At the age of 0-3 over 50% of burns lead to contractures. The largest number of contractures — 33 (42,8%) is observed in children at the age of 4-10.

Zavyalov shares the same opinion and claims that merely every hypertrophic scar in early childhood soon or later leads to functional or positional changes of the body (3). The risk of functional complications reduces the older patients go.

The division by age is approximately equal at all age groups. We absolutely agree with the opinion of Hadjiyski that in cases of fresh burns and of post-burns as well the number of men is larger than the number of women (6).

Any plastic surgery method requires treatment of the neighboring tissues in spite of the used surgical method. Evstatiev believes that classification and planning of surgical approach may be determined according to the form of the defect independently of the localization (2).

212 (89.9%) of the adults were operated using basic surgical techniques (STSG, FTSG, PNL, expander technique, aesthetic procedures such as lipofilling and dermoabrazio) and 24 (10,2%) — using combined methods containing one-stage surgical techniques. In children we observe similar results — 160 (84,7%) using the basic techniques and 29 (15,3%) the combined ones. Hop and Prasad (8,11) reach similar results during their long-lasting study on fresh burns and post-burn consequences. Both of them report about a larger percent of contractures (over 72%) and most of them (over 50%) are on the upper limb. As opposed to our study Hop (8) observes more defects on head and neck.

As regards to the surgical technique we used the variations of PNL. Most common in adults are the local flaps and in children – the Z-plasty. The combined techniques including Z-plasty are most frequent with STSG (3,5%) and local flaps ( 3,9%) (2).

Z-plasty we analyze separately from the PNL because of its often usage.

This technique interrupts the brides. We use it in cases of tissue insufficiency in some areas. We agree with McGregor (10), who claims that the Z-plasty is the most effective surgical method.

We found significant difference in the frequency of cases of syndactyly – 7,65% according to our study and 19% according to Hop’s analysis. There is a difference in the age as well – in our study the percentage of children with such deformation is much larger and we use free skin transplant in three cases. Hop and Prasad use FTSG and STSG in 20% of syndactyly cases (8,11).

We used classic expander technique basically in cases of post-burn alopecia and a couple of cases of vitious deformations of the neck, forearm and lower limb. We agree with Zanzov (4), who claims that expander technique leads to good functional and aesthetic results in cases of post burn alopecia using skin, similar by color and elasticity and preservation of the left hair follicles. (4). We keep the same the ratio 2:1 (as Sasaki does) (12) between the expander size and the defect size.We agree with Hadjiyski about the aetiology of fresh burns – scald burns and flame burns are the most common cases of fresh burns and of post-burns as well (6).

The hypertrophic scars after burn injuries are very common. The patients need a varied treatment using surgical and conservative methods in order to provide them a good quality of life.