According to UNO data over the last 20 years the number of injured people in various (as a type and impact) natural disasters amounts to about 1 billion, while the number of casualties exceeds 3 million.  Estimations of Bulgarian Ministry of Intereior’s „Fire Safety and Civil Protection“ Directorate (FSCP directorate) show that in case of an earthquake up to 26 % of the buildings in 94 towns and villages in regions with higher seismic activity can be destructed, which can lead to a great number of casualties. After the earthquake in 2012 in the Pernik region (5,8 degree of Richter magnitude scale) a new area of seismic activity has been introduced to the seismic risks map of Bulgaria. Dozens of people were injured or had psychosomatic traumas, hundreds were in a stress state. The earthquake caused also significant material damages.  In case of major floodings water can cover large areas (more than 910 square meters), and consequently affect 83 towns and villages in Bulgaria. [1, p. 20; 2, p. 195; 3, p. 33; 4, p. 32; 5, p. 10; 7, p.5; 8, p.35-38; 10, p. 60].

The Danube alone can be a source of risk for 30 towns and villages with a total population of 515 000 inhabitants. One of the most important floodings over the last 5 years has been the one in the area of the dam of Ivanovo in South Eastern Bulgaria on 6.2.2012. It affected severely the village of Bisser, the towns of Harmanli and Svilengrad. Eleven people died, dozens were injured and had psychotraumas. The disaster deprived dozens of people of their homes and caused serious material damages and economic loss.  The functioning of some indusrial enterprises and transport or storage activities hide the risk of industrial accidents with potential gas leakages which can affect more than 100 towns and villages. In case of a major nuclear accident more than 43 towns and villages are in danger.  The share of transport accidents with disastrous character in the country increases. Statistical data show that every year 300 000 people lose their lives in road accidents all over the world. The number of injured exceeds 8 million people.  In Bulgaria these annual numbers are respectively more than 1000 casualties and 10 000 injured people. [2, p. 22; 2, p.205; 3, p. 10; 11, p. 47].

It is a primordial duty of the state to assure flawless access of the population to timely and quality aid in Bulgaria, including in major accidents with a disaster character (earthquakes, floodings). The importance of the Emergency Medical Care (EMC) System in this context grows, notably taking into account the trends in pathology and the development of medicine in view of the increased frequency of various types of disasters on country’s territory. [1, p. 20; 3, p. 35].

The aim of the study is to examine the current structure, functions and actual status of medical staff in EMCC in Bulgaria.

To achieve the goal we set the following tasks:

Descriptive analysis of the laws and regulations, in Bulgaria concerning structure functions and actual status of medical staff in EMCC. SWOT analysis.

The EMC system as an element of the general health system of Bulgaria comprises all the structures of ambulatory and non-ambulatory aid that have something to do with managing an emergency event (on the site of the accident, during the transportation and at the hospital that has the necessary diagnostic and treatment resources). Therefore, the emergency care in Bulgaria is not a service provided by the Emergency Medical Care (EMC) Centres only but comprises various levels and degrees of competence, engagement and responsibility within the health care system as a whole. [1, p. 19; 3, p. 35; 13, p. 900, 901; 19, p.7; 21, p, 10].

Bulgaria has a long tradition in organizing medical care in emergency situations and in reacting to natural disaters, industrial accidents and calamities.  Until 1995 the emergency care in Bulgaria was provided by hospitals’ emergency departments. They answer the phone number 150 — one of the first nationwide telephone numbers for emergency medical care in Europe.  The emergency medical care system in Bulgaria was reformed in 1996 with the establishment of 28 independent emergency medical care centres. A new principle is introduced — separation of Emergency Medical Services and Immediate Medical Services. The situation in Bulgaria changed significantly over the 1996 — 2012 period and the EMC system confronted new challenges. An important reform of the national healthcare system took place — the changes concerned its structure, management and financing. As a result, the interrelations between the EMC system and the other structures of the health care system were affected. A new national system for emergency calls and EMC centres of a new type were introduced. In 2007 these centres were separated from the so called «Emergency Reception Departments».  [1, p. 17; 3, p. 30].

Until 2011 EMC centres were not a base for training and specialization of health professionals and were second-tier spending entities. All this further deepens the disintegration of the system of EMC and leads to deskilling and demotivation of personnel, to deterioration in the quality of the rendered medical aid  and ultimately — to serious social unrest. Bulgaria still lacks comprehensive and accurate legislation specifically directed toward the structure, organization and regulation of the EMC system and its relation to other structures – both  in routine work and in crisis situations and disasters. Bulgaria’s membership in the European Union as of 2007 implies an effective harmonization of EMC activities in the country with those in the other EU member states. Greater uniformity in the quality of health care, especially in EMC, is very important in view of the increased and ever increasing mobility of EU citizens.

In this regard, the Ministry of Health proposes the development of a new concept for EMC in order to define the responsibilities of all structures in the health system — primary care, hospitals, EMC centres as well as the connections and interactions between them. The main objective is to integrate and regulate all activities and structures in the health system in terms of EMC, to regulate strictly the responsibility in routine practice as well as in disasters, and to shorten the maximum time for servicing patients while respecting the quality and safety standards. Their acievement will be based on the European best practices, taking into account the country-specific culture, traditions, values, realities and objectives [1, p. 22; 3, p. 30].

Structure of the EMC system. The system of the EMC in Bulgaria comprises 28 EMC centres which correspond to each of the administrative districts of the country. These centres have a total number of 198 branches. Each EMC centre (including its branches) functions within the territory of the respective district. (Fig. 1) (source: Ministry of Health data)

Taking into account the distribution of the EMC centres, the relief and the road system of the country, we can conclude that the provision of EMC services is not even. This means that the population does not have an equal access to emergency assistance.  The disparities are both interdistrict and intradistrict. According to the Ministry of Health data, the time to access a branch of an EMC is up to 20 minutes for nearly 58 % of the towns and villages, between 20 and 30 minutes – for around 27 % of them and more than 30 minutes – for about 15 % of the settlements. About 211 000 people (0,03 % of the total population) live in regions that are distant and with a difficult access. 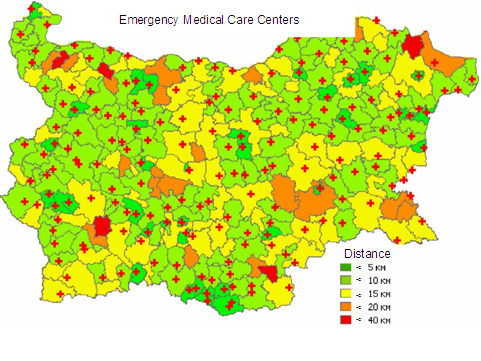 Fig.1. Distance in km to EMC centres (or their branches) — average data

(Аccording to Ministry of Health data)

Human resources. The total number of the employees in the EMC centres in Bulgaria amounts to about 7000 (by 1.1.2011, and 2015). They work in 354 teams (87 reanimation teams and 267 first aid teams — 141 medical teams and 126 paramedical teams).  There are 35 transport teams and 167 stationary teams. The distribution of the personnel does not always reflect the objective needs stemming from the number of the population or the size of the covered territory. It is rather a reflection of the evolution over the years of the medical structures in each district  This problem points to the lack of more precise mechanisms to define the type, the number or the distribution of the teams within each EMC centre. The disproportions of the distribution of medical teams on the territory can be easily seen while applying two evaluation criteria: number of teams per 100 000 inhabitants and number of teams per 1000 km². (Fig. 2 and 3) (source: Ministry of Health) 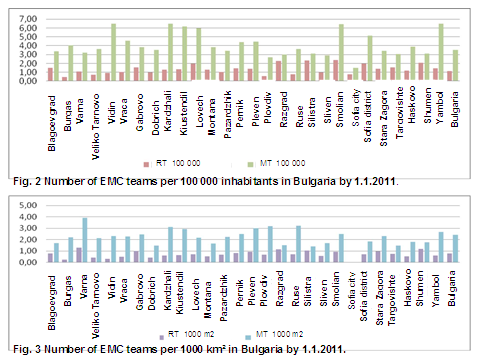 The discrepancies are also important while taking into account the number of teams in view of the territory – an even more relevant indicator since most of the districts are of a low population density. In some districts like Pleven, Ruse, Plovdiv one team serves 250-260 km², while in Dobrich the served territory is 525 km², in Montana – 453 km², Targovishte – 443 km² [1, p. 20; 3, p. 100].

Fig. 4. Structure of the medical personnel in view of their type in EMC centres in Bulgaria by 1.1.2011 (According to Ministry of Health data) and 2015 (scientific theses) 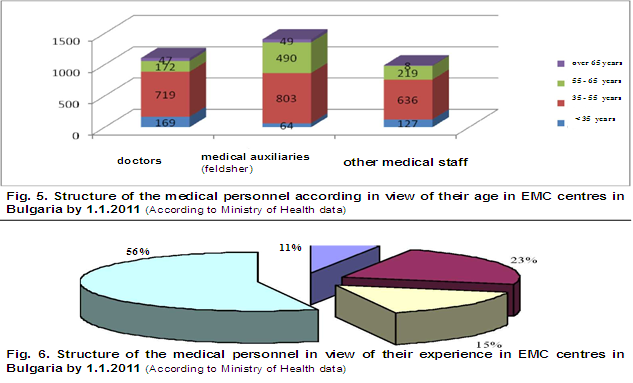 The analysis of the structure, state, organization and functioning of the EMC system point to the following substantial problems:

There are several problems of a more general nature:

2.Impaired integrity and coordination between EMC and other elements of the health care system — primary care, specialized outpatient care, in-patient care and emergency services, leading to destabilization of the health system as a whole.
3. Worsening indicators of public health.
4. Lack of satisfaction at a public level with health services quality, including EMC.
5. Increasing need of an adaquate emergency medical response in the event of mass disasters and calamities.
6. Commitments of the country as a member of the European Unionin in view of the quality of health care.
7. Increase in finance costs in the system.


SWOT ANALYSIS OF THE EMC SYSTEM

Results. The analysis of the current state of the EMC system  in Bulgaria shows the need to update and improve the structure and organization of the EMC centres in response to DAC. It points out the strengths and weaknesses of the system and outlines the concept for sustainable development in the future.

Conclusion. There is an increasing number of disasters worlwide which underlines the importance of EMC. The requirements for the provision of EMC in Bulgaria are becoming stricter. More and more people need EMC — this highlights the pronounced shortage of health personnel in EMC centres in the country.

Emergency care centers in Bulgaria is guaranteed to all those in need of it. The article emphasizes the state’s commitment to the medical system in case of DAC. The country has a concept for the future development of the system of EMC centres. This concept  provides for the inclusion of a new professional category — «paramedic». Bulgaria lacks a regulatory framework, standards and protocols for the operation of the EMC centres for the provision of pre-hospital care, including in the case of DAC.