Reports and analyses of world and European official institutions point out  that the demographic problem is an issue concerning all European countries. According to a study of the UN, the population of our continent is drastically decreasing and the tendencies are for deepening of the crisis. Bulgaria occupies 210th place according to birth rate in the world, with 8.92 births per 1000 people, states a report of the World Book of Facts as of March 2014. Our neighbouring countries are ahead of us: Macedonia – 171th place, Romania – 206th place and Serbia – 208th place. After us is only Greece, occupying 213th place. By death rate index, Bulgaria occupies the sixth place in the world. Here the death rate is 14.3 per 1000 people. Ahead of us are South Africa – 17.49, Ukraine – 15.72, Lesoto – 14.91, Chad – 14.56 and Guinea Bissau – 14.54. Our country occupies 229th place according to growth in the population, with a negative coefficient of minus 0.83%. The macroeconomics, the labour market and the standard of life of the population play a decisive role for the demographic processes in Bulgaria.[1;3] Our country occupies one of the last places in Europe by the index „gross domestic product per capita“[7;9]. The highest relative share in the category of poor people is occupied by people with primary and lower education, unemployed, unmarried mothers, where the level of poverty is almost three times higher than the average for the country. Poverty is also widespread in families with children, especially with three and more children[11;12]. Inflation and the inherent financial destabilization suppress the reproductive attitudes of the population and motivate  many young and educated people to look for their career development abroad. Despite the decreasing rate of unemployment and the tendency of opening more workplaces, the young people are still facing difficulties in finding their first job after graduation[14;15]. There is still a controversy on the labour market – the preference for hiring young people and the simultaneous requirement for professional experience[16].  Such requirements disbalance the labour market and strain the relations between the generation. On the background of the European standards, the Bulgarian population demonstrates lower sexual and contracepive culture related to the use of low-efficient traditional contraceptive methods and mass practicing of abortion[17;19].

The objectives of our study are:

Subject of observation is the population of the district of Plovdiv. The study is retrospective, for a 5-year period (2010-2014 inclusive). Quantitative and qualitative indices have been used for the analysis. The primary information has been derived from the National Statistical Institute, the Ministry of Health, the Regional Health Institute – Plovdiv. The information has been processed using variational, alternative and non-parametric analysis. For the computer processing of the collected database the statistical pack SPSS version 19 and Microsoft Excel have been used.

The district of Plovdiv is located in the central part of Southern Bulgaria and occupies an area of 5972.9 sq.m., which is equal to 5.4% of the territory of the Republic of Bulgaria. 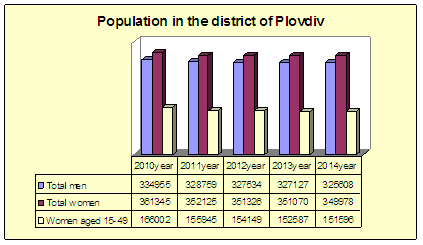 The per cent ratio between men and women is in favour of the women, and in the analyzed period of time a progressive tendency in the direction of the female gender has been observed. The collapse of the birth rate is a consequence of the sharp decrease in the number of women in reproductive age (15-49). (Table 1)

The natural growth in population in the district of Plovdiv (Chart 2) is in the direction of depopulation: 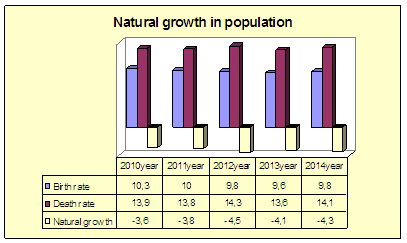 The ratio between the number of births and abortions per 1000 women in the district of Plovdiv is 1:0.4, which has not changed for the last ten years (Chart 3). The change in the model of cohabitation of young couples, most of which live together without marriage, also plays an important role for the number of newborns. In the past one of the main reasons for concluding a marriage was unplanned pregnancy. Living together without marriage and the spreading of the methods of contraception even among the Roma population gives an opportunity for the couples to postpone the birth of their children for better times. 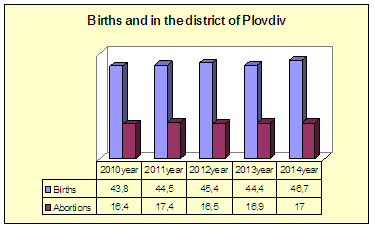 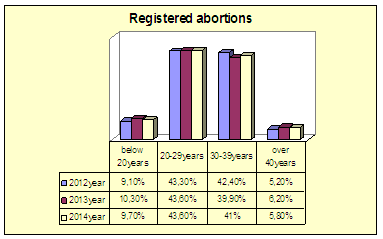 The facts with respect to the registered abortions in the age group 20-29, immediately followed by the age group 30-39 have been analyzed and graphically presented. This is an alarming fact, as those age groups have the highest fertility rate.

The registered abortions by type have their dynamics during the observed period of time (Chart 5). The highest relative share in the regressive tendency is occupied by the spontaneous abortions. They are followed by the desired abortions. They mark a progressive tendency. The abortions by medical indications have a modest share (around 6%). The economic realities and the changing role of the women in the Bulgarian society do not allow for the reversion to the model of simple reproduction, where the generations are replaced by the same number, without increasing the population. To this end a woman must have at least two children in her fertile age – between 15 and 49. Statistics shows that this number is below 1.5 on average and marks a downward trend on the background of the reducing number of women in reproductive age. 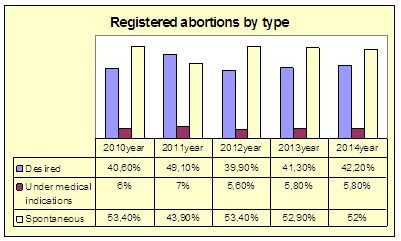 The fact reported from the data on chart 6 for the distribution of desired abortions is also alarming. The highest per cent belongs to the mothers with two children, followed by mothers with one or without children, considering the fact that from all desired abortions in the district of Plovdiv in 2014, 49.7% have been performed by women who do not have children or have only 1 child (Chart 6). 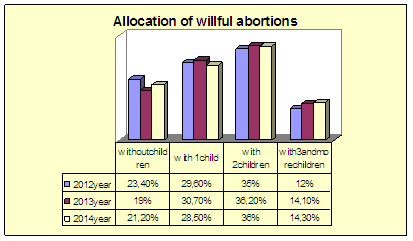