Suicide is an exceptionally important medical and social problem of modern society. Suicide methods differ and depend on the particular region, but on a global scale, in most countries, within the general structure of suicidal deaths, hanging takes first place [1, 3, 8, 9, 14]. Varying information is reported about some of the countries on the Balkan peninsula regarding the relative share of the suicidal hangings committed. In the region of Mures (Republic of Romania) they are 85.4%, in the Republic of Serbia – 57%, and in the region of Trakya (Republic of Turkey) they are 41.8% [1, 2, 10, 11].

In the Republic of Bulgaria, the relative share of committed suicidal hangings has increased over the years [12, 13]. Despite the high rates reported, there is insufficient detailed characterization of the specific nature of the suicidal act, and lack of a description of the injuries found during the forensic medical autopsy. Forensic medical investigations related to the postmortem diagnostics, genesis and stages of occurrence of death in the cases of suicide could help in the prevention of suicides.

The aim of this study is to examine the characteristics of suicidal hangings and the injuries caused by them.

Material and method: The object of this study are the suicides committed by hanging, registered at the Departments of Forensic Medicine of St. George University Multi-Profile Hospital for Active Treatment EAD and Plovdiv Multi-Profile Hospital for Active Treatment AD, Plovdiv, over the period 2000-2009. For the collection of input  information has been used a historical method of choice. Alternative, variation, non-parametric and graphical analysis has been used in the statistical processing of information [4, 5].

Results: Over the period 2000-2009, 480 suicidal hanging deaths were registered in the region of Plovdiv, but forensic medical autopsy was conducted in 405 of them.

The distribution of suicides by gender and type of suspension is presented in diagram 1. 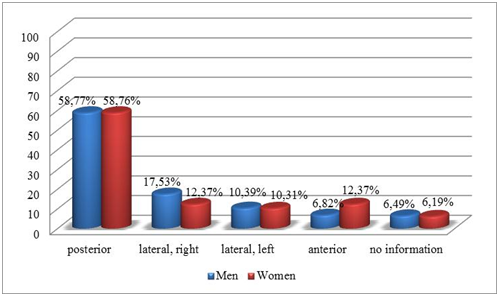 Diagram 1. Distribution of suicides by gender and position of the noose

Comparative analysis of the data presented in Diagram 1 shows that typical posterior suspension is the most common with both gender suicides.

In the predominant part of the suicidal hangings – 368 people (90.86±1.43%), a soft noose was used. It has been established that only 11 people (2.72±0.81%) used a hard noose, with only one woman among them. No information is available about 26 cases (6.42±1.22%) of suicidal hanging. Information about the specific type of noose used is available about 155 cases only. Hard nooses were mainly made from electric cables or metal wire, whereas soft nooses were made from rope, bands, towels, bed sheets, etc. (Diagram 2). 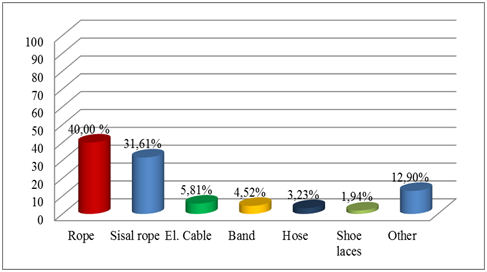 Diagram 2. Distribution of hanging suicides by the type of noose used

The analysis of the suicides committed by hanging has established that the most frequently used noose is the single-coil one, which is observed in 292 cases (72.10±2.23%). Two-coil, four-coil and multiple-coil nooses are also used.

With all suicides are found the typical hanging external characteristics – spotted hemorrhages on the eyelid conjunctiva and sclera (ecchymoses), presence of strangulation mark on the neck. During the forensic medical autopsy of the suicides, in all of the cases were found the spotty hemorrhages under the epicardium and the pleura (Tardieu spots), characteristic of mechanical asphyxiation, and in some of the cases were established fractures of the hyoid bone, thyroid cartilage and neck muscle hemorrhage. Traumatic injuries in the neck which are typical of this kind of suicides only have been examined. 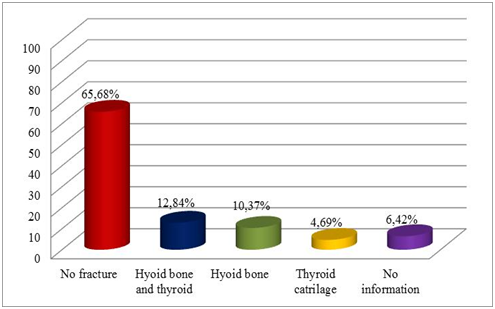 Fractures of the hyoid bone may affect the left horn, the right horn, both horns or the body (Diagram 4). 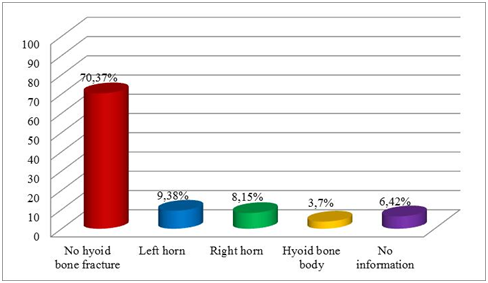 Diagram 4. Types of fractures of the hyoid bone

Fractures of the thyroid cartilage may affect the left or the right horn individually, both horns or its body (Diagram 5). 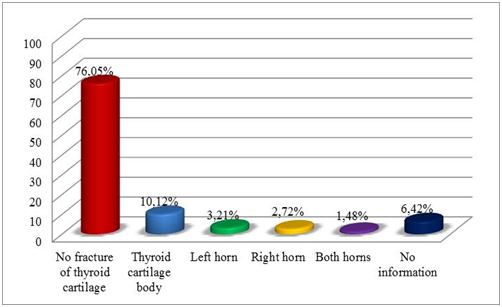 Diagram 5. Types of fractures of the thyroid cartilage

The bruises caused by hanging are most frequently located in the muscles surrounding the fractures or in certain areas of the neck muscles (Diagram 6). 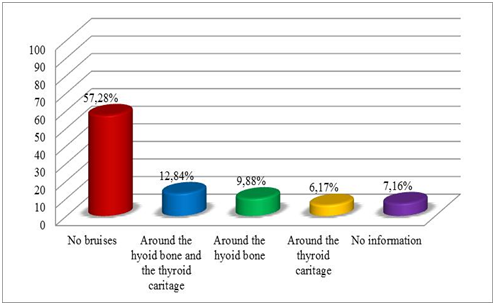 This study has established that there is an atypical position of the body in 4.20% of the cases of suicidal hanging only, unlike the reported 50% in England and Wales, or 16% in Australia [3, 8]. This shows the preference of suicides for the typical position of the body during the act of hanging. Accidentally, in the event of impossibility to commit hanging, suicides resort to atypical methods of suicidal hanging.