Larga catchment is a left tributary of the Prut river that is located in Tigheci Hills in south-western part of the republic, representing a transitional stage between Central Moldavian Plateau and the Moldavian South Plain (fig. 1). The studied region has an area of 146.8km2, with modest elevations between 100 and 200 m and gentle sloping land.  The soil is characterized by homogeneity at type level with a clear predominance of chernozems (about 75 % of total agricultural land). 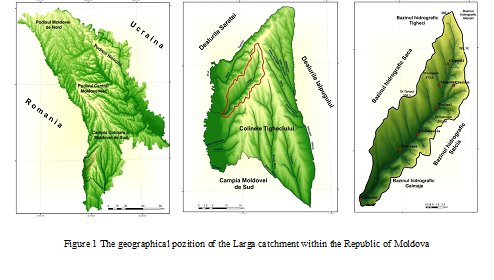 Based on the 2007 edition orthophotoplans and resolution of 0.5 m [3] was drawn the map of current land use within the Larga catchment. In terms of the identification and utilization categories was adapted the specific classification of the Romanian General Cadastre [1] as well as the Niacsu model (2012) [2, p. 179].

The most important category of use which prevails in the studied region is given by arable land, occupying nearly half of the territory of the catchment (48.6 %). This type of land use was grouped into four categories: genuine arable (annual cropland), with a surface of 5647.5 ha (38.4 %) mainly present on the back slope from the right part of the river Larga, quite favourable for this type of use but also on the top of the height plate or even on the floodplains on the eastern side of the catchment; complex arable land (land located in the localities), with a surface of 706,5 ha (4.8 %); degraded arable land (lands situate on degraded surfaces), with a surface of 133.1 ha (0.9 %), which appears in the lower part of the catchment, on the left side that is affected by pedo-geomorphological processes and cultivated pastures  (lands used as meadows, rarely tilled), with a surface of 661.2 ha (4.5 %) with local appearances on the lands affected by erosion and on stabilized landslides (fig. 2). 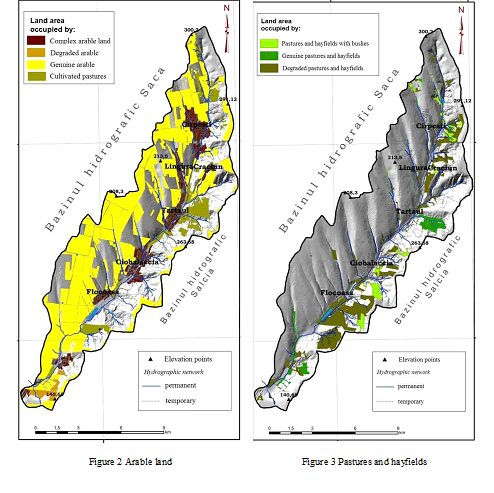 Within the Larga basin are found favourable conditions for the vineyard lands development. These conditions are created by the slopes with a south-eastern aspect, the presence of the chernozems and a relatively dry climate (fig. 4).

Vineyards have an area of 1990.4 ha (13.7 %) and are grouped into two subcategories: genuine vineyards (1439.4 ha) and degraded vineyards (551.3 ha). The largest areas of vineyards are found within the municipalities Lingura, Tartaul and Ciobalaccia.

Orchards, consisting generally of apple, plum, peach, apricot and mulberry occupies only 3.5 % and the largest area is located on the right side of the lower basin, at the boundary with the Saca basin. From 514.1 ha, 67.3 ha are abandoned orchards, often replaced with degraded pastures, as in the case of the right side of the upper basin (fig. 5 and fig. 6). 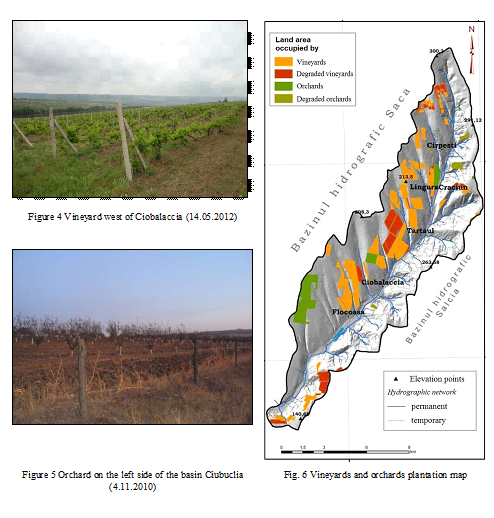 Forest surfaces are composed from all the forest, forest plantations and protective forest belts (fig.7). Forests have only 523.0 ha (3.6 %), limiting itself only to a portion of the left side at the source of the river Larguta, on the territory of the Larguta and Haragis municipalities. This forest area is a fragment of scientific reserve „Forest Tigheci” 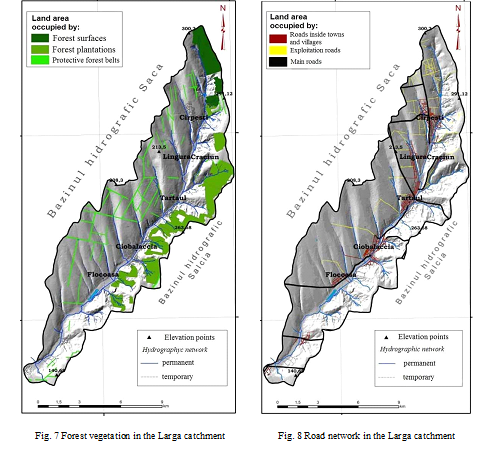 By 1990 is noticed an increase of forest land, due the establishment of Forest Agency, after which were taken under state protection significant surfaces of forest. From the total surface of the forest land, the largest one is occupied with forest plantations with 1593.9 ha (10.8 %). The largest areas of forest plantations are in the middle part of the Larga basin, on the front cuesta that is affected by a number of geomorphological processes. Protective forest belts are preserved only on the moderate degraded back slope, on the right side of the river Larga and occupies a surface of 167.8 ha, or 1.1 % of the territory.

The Roads were grouped in three subcategories: urban roads, major roads and exploitation roads, occupying a total area of 177.1 ha (1.2 %). From the national main roads, the most important is R56, crossing the Larga basin from west to east between the localities Cantemir and Baimaclia (fig. 8). From the north to south the connection is made via a modernized road (asphalt), road situated in the Larga river valley.

The exploitation roads occupy 34.2 ha, representing in fact all roads that make connection between land parcels.

Roads inside towns and villages, the third subcategory represent all roads within the localities and occupy an area of 79.4 ha.

In the aquatic lands are included lakes, ponds and wetlands. After mapping the categories of land use, these lands occupy the smallest surface, only 45.0 ha (0.3 %). We note that the rivers were not included in this type of category, which was mapped linearly. The largest aquatic lands are located in the lower Larga basin, as a result of small reservoirs construction.

Unproductive lands have an area of 173.5 ha, represented by surfaces with high erosion (unforested gullies), active landslides and the riverbed of the Larga valley, without specific vegetation. The largest areas of unproductive lands are concentrated in the municipalities Cirpesti, Ciobalaccia and Tartaul.

In conclusion, the Larga catchment with a relatively small area is characterized by a large range of land use categories. About 80 % of the territory is occupied with agricultural lands, which largely explains the purely agricultural economy in the basin, complemented by other important natural resources, but endowed with a soil cover able to maintain a modern agriculture.