Microfinance is the provision of a broad range of financial services such as deposits, loans, payment services, money transfers, and insurance to poor and low-income households and, their microenterprises. Microfinance services are provided by three types of sources:

The demand for microcredit that originates both from households and microenterprises is also large. Poor households in the Region require microcredit to finance livelihood activities, for consumption smoothening, and to finance some lumpy nonfood expenses for purposes such as education (e.g., school fees and books), housing improvements, and migration. Many Asian countries have numerous small farms and their operators also require microfinance services. The other source of demand is nonfarm microenterprises, which cover a wide array of activities such as food preparation and processing, weaving, pottery, mat and basket making, furniture making, and petty trading.

The demand for other financial services among poor and low-income households and their microenterprises could also be significant. A good share of rural households borrow, many more save, but all seek to insure against the vagaries of life and therefore the demand for insurance services among the poor is vast. [2] A private insurance company in Bangladesh that started to provide micro-insurance services to low-income households on a commercial basis, for example, found that its client base was expanding rapidly. At the end of 1999, this company had over 800,000 clients, about 50,000 of which are considered poor. This experience shows that the supply of such services creates its own demand because the real demand for such services remains hidden when suitable products are not available in the market.

The market structure in microfinance varies significantly across countries in the Region depending on their stage of financial development, level of economic development, policy environment, and other factors. However, aspects of the supply, particularly about different types of suppliers, may be usefully discussed.

The microfinance services are supplied mainly by informal sources. Their collective outreach, both breadth and depth, is vast in most countries. They supply mainly short-term credit and charge higher interest rates than semiformal and formal sources. Because of the relatively greater bargaining power enjoyed by the informal suppliers in general, the terms and conditions under which services are provided do not enable the clients to fully harness economic opportunities. The informal sources operate in highly localized areas. Therefore, their contribution to financial intermediation and improvement of resource allocation is also limited. For example, informal sources do not allow savings to be collected from more than a small group of individuals well known to one another, and they do not move funds over large distances. Most informal insurance mechanisms are typically weak, particularly against repeated shocks, and often provide only inadequate protection to poor households. [3]

The MFIs and other financial institutions (OFIs) providing microfinance services have expanded their outreach from a few thousand clients in the 1970s to over 10 million in the late 1990s. The developments in microfinance in the Region have set in motion a process of change from an activity that was entirely subsidy dependent to one that can be a viable business.

Poverty is the main cause of concern in improving the economic status of developing countries. A microfinance institution is an organization that offers financial services to low income populations. Almost all give loans to their members, and many offer insurance, deposit and other services.

A great scale of organizations is regarded as microfinance institutes. They are those that offer credits and other financial services to the representatives of poor strata of population.

Microfinance is increasingly being considered as one of the most effective tools of reducing poverty. Microfinance has a significant role in bridging the gap between the formal financial institutions and the rural poor. The Micro Finance Institutions (MFIs) accesses financial resources from the Banks and other mainstream Financial Institutions and provide financial and support services to the poor.

MFIs are the pivotal overseas organizations in each country that make individual microcredit loans directly to villagers, microentrepreneurs, impoverished women and poor families. An overseas MFI is like a small bank with the same challenges and capital needs confronting any expanding small venture but with the added responsibility of serving economically-marginalized populations. Many MFIs are creditworthy and well-run with proven records of success, many are operationally self-sufficient.[5]

The term “transformation,” or commercialization, of a microfinance institution (MFI) refers to a change in legal status from an unregulated nonprofit or non-governmental organization (NGO) into a regulated, for-profit institution. Regulated, transformed organizations differ from nonprofits in that they are held to performance and capital adequacy standards and are supervised by a financial authority, typically the central bank of the country where they are registered. A transformed MFI also attracts equity investors. The equity investors want to ensure that the values of their investments are maintained or enhanced and elect Board members who share a common vision for the new for-profit institution. Among transformed MFIs, varying classifications of regulated institutions exist, the strictest being banks — rural banks and thrift banks — followed by non-bank financial institutions. Different countries have varied names for these regulated MFIs.

The microfinance sector consistently focuses on understanding the needs of the poor and on devising better ways of delivering services in line with their requirements, developing the most efficient and effective mechanisms to deliver finance to the poor. Continuous efforts towards automation of operations is steady improving in efficiency. The automated systems have also helped accelerate the growth rate of the microfinance sector.

The goal for MFIs should be:

On the next page a general overview of the advantages and disadvantages of microfinance institutions’ players are shown.[6] 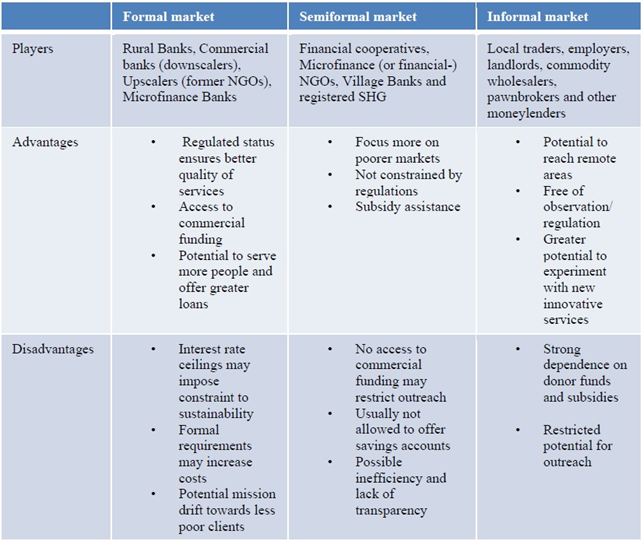 In the end the concept of microfinance with its potential to generate profits surprised many. The huge number of poor people, completely forgotten by the formal financial market for such a long time, turned out to be viable customers of micro financial services and changed the paradigm of asian countries. Microfinance will continue to provide attractive investment opportunities in the future if people from developed countries keep being on the lookout for new markets, products and investment opportunities in this field.

6.     Sarah Guntz, Sustainability and profitability of microfinance institutions. University of Applied Sciences Nuremberg. Research Paper 4/2011.[schema type=»book» name=»IMPORTANCE OF THE MICROFINANCE INSTITUTIONS IN ECONOMY» description=»Microfinance is the provision of a broad range of financial services such as deposits, loans, payment services, money transfers, and insurance to poor and low-income households and, their microenterprises. Microfinance institution is a financial institution specializing in banking services for low-income groups or individuals. A microfinance institution provides account services to small-balance accounts that would not normally be accepted by traditional banks, and offers transaction services for amounts that may be smaller than the average transaction fees charged by mainstream financial institutions.» author=»Rakhimov Akmal Matyaqubovich, Ibrokhimov Ilkhomjon Shavkatjon ugli» publisher=»БАСАРАНОВИЧ ЕКАТЕРИНА» pubdate=»2016-12-20″ edition=»euroasia-science_28.04.2016_4(25)» ebook=»yes» ]