The significance of the varieties as a prerequisite for increased efficiency in vegetable growing is manifested strongly in the conditions of market economy and increased competition. The cucumbers are main greenhouse culture with important economic importance. The cucumber varieties should correspond to some basic requirements like high yield even taste qualities, durability in preserving and diseases resistance [7]. Great attention is paid also to the indexes that characterize the varieties suitability for the separate directions of consumption [6; 3]. In the Bulgarian greenhouse production during the past years more significant part take foreign vegetable varieties. In their mostly part they conduct study in the Executive variety study, approbation and seed control agency but only by DHS/distinction, homogeneity and stability/. The varieties are not evaluated by biological and market qualities. On other hand the accompanying characteristic of the imported varieties is connected mostly with their productivity and stability to economically imported diseases but there is no official information for their climate adaptation to the conditions in Bulgaria [8]. Some authors [1; 2; 9; 5] pay attention to the influence of the variety and the way of growth of greenhouse cucumbers.

The investigation purpose is to conduct comparative testing of different greenhouse cucumber varieties.

Investigation indexes: Microclimate conditions. At 8 o`clock and at 14 o`clock the following results were registered: — air temperature. It was registered with minimum-maximum thermometer. — the substrate temperature at 10 cm. depth. With soil thermometer. — sun radiation. With portable luxmeter. The relative air humidity was measured at the same hours.

Biometric analysis. The stem growth pace and leaves formation were defined. The measurements were made weekly till removing the growth top.

Yield. The production and the total yield were defined three times a week (Monday, Wednesday and Friday).

Results and discussion. The experiments with the cucumbers were conducted in steal-glass houses Venlo type without heating with restricted possibility for microclimate management and maintaining. Due to that the litter is influenced mainly of the outside climate factors and for the grown culture.

The restriction of the sun radiation stream to the plants after April was achieved through shading the greenhouse with whitening solution (table 1).

Heat conditions. For each of the three experimental years, the average minimum air temperature in the greenhouse had the lowest values in the second half of April and in May – 10.7оС — 11.9оС (Table 2).

The minimum temperature rose in June, averaging at 15,5 оС, and in July and first ten days of August it reached – 16,5 oС and 17,8 oС, respectively.

These minimum temperatures were recorded at night. Throughout the period of the experimental work they were by 15-18 oC lower than the optimum (25-28  oC) and in the last ten days of April and in May, the minimum temperatures were lower than the minimum requirements for plant growth and development. In the morning hours (about 8,00 h), the temperature increased by an average of 6-8 oC. As the day progresses (at 2,00 h) it averaged at 37,7  oC for the second half of April; the average temperature measured at 2pm decreased to 32,1°C and 33.9°C during the months of May and June and then increased gradually to reach values of 34,9 oC in July and 35.0 oC for the first ten days of August. The average values of the maximum air temperature were the highest during the second half of April (38.8 oC) and then decreased and were between 36.0 – 36.6 oC. The average temperature amplitude varied from 19 to 21 oC, which adversely affects the growth and development of plants

Relative air humidity. The air humidity was regulated through ventilation, irrigation and refreshing sprinkling during the three year period of growing the cucumber plants. Despite that due to higher ventilation the relative air humidity decreased and was under the optimal for cucumbers (80% – 85%) – at 8 o`clock it was within the range of  44.3 – 62.0 % and at 14 o`clock – from 40.3 to 45.9 %.

The registered data from the microclimate factors showed that during the period of the studies they have different from the optimal for that culture values which gives unfavorable influence.

Nutrition regime. The study was conducted in same nutrition background, favorable for the cucumber culture. For its maintaining it was made basic fertilization of the area with 40 kg/da triple superphosphate and 50 kg/da potassium sulphate and during the period of end of May – beginning of August – weekly feed up with ammonium saltpetre nitre and potassium sulphate by 3,5 kg/da.

Growth expressions. For the entire experimental period of comparative testing of new greenhouse cucumber varieties, the plants with the fastest central stem growth rate were the Carlin variety — 6,12 cm/24h, while the slowest rates were measured in the Defense variety – 3,54 cm/24h. The difference in the growth between the Carlin variety and the Defense and Airbus variety and the line E31. 2090 was proven (Table 3).

The statistical analysis did not register any differences in the rate of leaf-formation between the individual varieties. The largest values were measured in Airbus — 0,65 leaves /24h, Carlin — 0,64 leaves /24h and Voreas and Cratos with 0,62 leaves/24h hours. The Defense variety has the slowest rate of formation of leaves – 0,50 leaves /24h hours.

Yield. Out of the tested varieties, in conditions of spring planting and limited control of the microclimate conditions in the steel glass greenhouse, the highest quantities of first-quality production was measured in the Voreas variety — 3452 kg/da, while the lowest were in the Carlin variety — 1458 kg/da (Fig. 1). The difference between the individual varieties’ yield values is statistically significant. The highest total yield was recorded in the varieties Voreas – 5974 kg/da and Cratos — 5774 kg/da. This indicator has the lowest average values in the Imea variety — 3647 kg/da and the Carlin variety – 3918 kg/da. The differences between the results in the most productive varieties of cucumbers and those with the lowest total yield are mathematically proven. 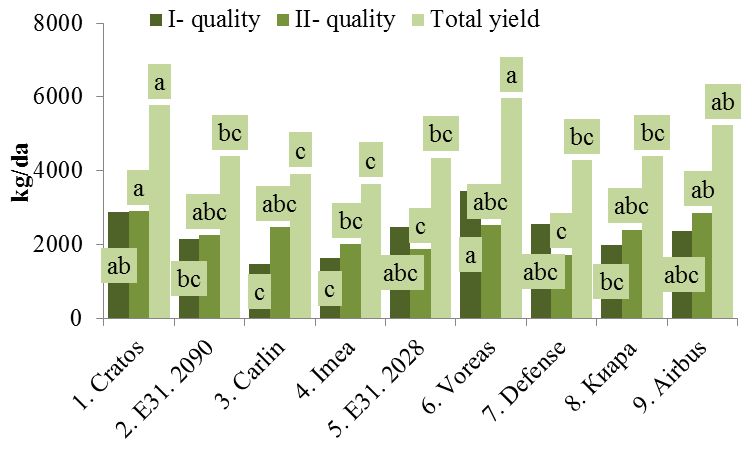 Comparing the results regarding the first quality production as part of the total yield of the individual varieties throughout the period of the experiment, we can say that the greenhouse varieties with the highest percentage of production of first quality are the Defense and Voreas with respectively 59.7% and 57.8% (Fig. 2).

The lowest percentage of production of first quality was measured in the Carlin variety, the value being only 1/3 of the total yield — 34.13%. 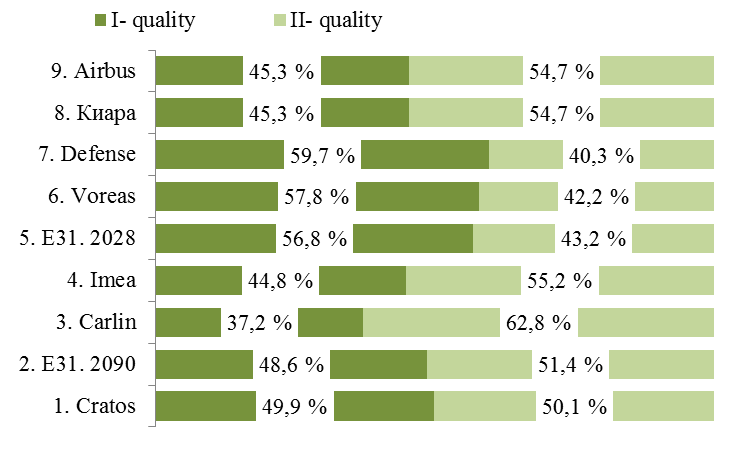