The real start of the atomic structure takes place in 1900 by the discovery of Max Plank that light can not treated as wave but as a discrete quantum of energy called photons .The photon concept can describe  some physical phenomena like black body radiation, photoelectric effect, beside atomic spectroscopy. The atomic spectroscopy is associated with the discovery that each atom emits electromagnetic wave having only certain specific frequencies. These frequencies and wavelengths are discovered by using spectrometers [1].

People tried to explain the atomic spectra by suggesting certain atomic models. The most popular model is that suggested by Bohr in 1913. In his models Bohr suggested that each atom consists at a nucleus around which electrons revolves in certain orbits.

When an electron moves from a higher orbit to a lower one, the atom emits a photon of energy equal to the difference between the energy of the two orbits [1].

Although Bohr model for the atom agrees well with experimental spectroscopy, but it does not rest on a solid theoretical ground.

This motivates Heisenberg in 1925 and Schrödinger in 1926 to formulate a full quantum theory that rests on a solid theoretical ground and can explain most of atomic phenomena [2].

Most of experimental works in quantum mechanics is based on the atomic spectra, which is widely used in many applications. The importance of spectroscopy make it very important for the physicists to do intensive experimental work in this field. Unfortunately, the experiments needs sophisticated and expensive devices, which are rare in third world countries. Thus, one needs to select a path way to solve this problem.

The aim of the work is to design a simple electrical circuit to find the energy gaps for bulk materials, namely semiconductors. The effect of temperature and a magnetic field on the energy band is also investigated.

The conductivity of intrinsic semiconductors is strongly dependent on the band gap. The only available carriers for conduction are the electrons which have enough thermal energy to be excited across the band gap[3].Band gap engineering is the process of controlling or altering the band gap of a material by controlling the composition of certain semiconductor alloys, such as GaAlAs, InGaAs, and InAlAs. It is also possible to construct layered materials with alternating compositions by techniques like molecular beam epitaxy. These methods are exploited in the design of heterojunction bipolar transistors (HBTs), laser diodes and solar cells [3].

The distinction between semiconductors and insulators is a matter of convention. One approach is to think of semiconductors as a type of insulator with a narrow band gap. Insulators with a larger band gap, usually greater than 3 eV, are not considered semiconductors and generally do not exhibit semiconductive behaviour under practical conditions. Electron mobility also plays a role in determining a material’s informal classification [3].The band gap energy of semiconductors tends to decrease with increasing temperature. When temperature increases, the amplitude of atomic vibrations increase, leading to larger inter atomic spacing. The interaction between the lattice phonons and the free electrons and holes will also affect the band gap to be smaller [3].

The circuit, which is designed to find the energy levels and gaps of some semiconductor devices, is presented. The samples, which are selected beside the experimental procedures, are also discussed. The aim of this work is to use a simple electric circuit to find the energy gaps of some semiconductors. This can be done by relating current to voltage and see the position where the current changes abruptly these position are related to the energy gaps.

The circuit is designed to find the energy gap about 100 readings for voltage and current in the voltage in the range of milli volt were made.

The following steps to find the energy band gap should be done:

Figure (a). V versus I for LED

Figure (b). V versus I for LED

Figure (c). V versus I for LED 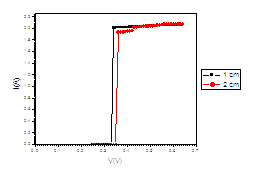 Figure (d). V versus I for LED

Figure (e). V versus I for LED at different temperatures 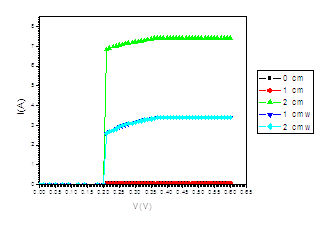 Figure (g). V versus I for Transistor at different temperatures 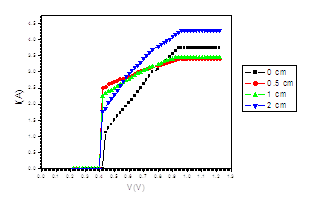 The Results of energy gap:

a- for different temperatures.        b- At different distances for magnetic field Transistor

a- for different temperatures.        b- At different distances for magnetic field Discussion

Where any increase in free carries concentration increases the current. Sometimes the current remains almost constant when the voltage is increased. This may be attributed to the fact that the energy gained by electrons to jump from the valence to the conduction band through the energy gap is less than the value of the energy gap Eg, I.e.

This work shows that simple electric circuits can be utilized to find the energy gaps and levels for semiconductors. This requires to take a bout 50 or more readings for I and V.

The position where the current remains almost constant or increases abruptly can be used to find   the values of the energy gap.