Demands for the natural gas in the world don’t stop rising.  But in the present time due to high prices of natural gas established by exporting countries, other polities considered it more beneficially to develop their own but untraditional resources including the shale lands. Such countries as the USA, Canada, Germany and some other European lands have already been engaged in the adopting of the exclusive technology for such reservoirs.

Shale gas listed as one of the unconventional types of hydrocarbon resources. It is stored in the small clusters in the mass of sedimentary rock called kerogen shale. The active accumulation of layer took place during the Mesozoic and Paleozoic eras, so the occurrence depth of the reservoirs counts from 1,7 to 2,5 km (6000-8000 ft). This complicates the technology of production doubly as it means the location beneath underground source of drinking water which is called aquifer and runs from 0,3-0,9 km under the surface.

According to its geological origin, the kerogen is a result of clay metamorphism under high underground pressure and temperature.  This led to the structural changes and loss of plastic and permeable properties. Consequently, conventional technologies could not provide profitable recovery of shale reservoirs and required more high complicated combination of methods.[4] 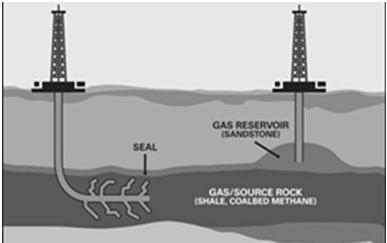 During the last decade the most efficient results of shale gas recovery have been obtained with a combination of horizontal drilling and hydraulic fracturing technology. The main destination of hydraulic fracturing is the creation of the sufficient high pressure in order to crack solid low-permeable shale structure and create paths for enclosed gas to the surface. It is managed by water-based fluid that consists of more that 8 million liters of water plus several thousand tons of sand and about 200,000 liters of chemicals for one injection.

The underground mechanism of the process includes the penetration of mixture into the rock layer and formation there innumerable tiny cracks. The sand as a proppant prevents the cracks from closing and the chemicals provide protection, stability and purification. [3] On the present time it is known approximately 596 names of chemicals: corrosion inhibitors, thickeners, acids, biocides, inhibitors for the control of oil shale, gelling agents and others that control and stimulate the process. 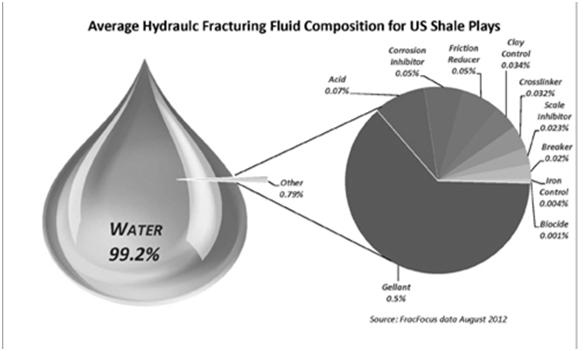 Image 2. The chemical addictives in water fluid and its role during the process.

Recent studies have shown a significant amount of production and ecological problems of the technology:

The improvements of the technology have been developing all the time to minimize damage and achieve more effective production. Here the alternative idea to completely change the composition of the mixture injected into the reservoir rock has brought significant results.

In the propane fracking technology only liquefied propane gas performs as a base of the fluid. Propane (C3H8) is the hydrocarbon gas of organic origin that is already contained underground. As pressure increases above 5 MPa, it is converted into liquid phase (LPG). The density of propane gas is 2.019 kg per cubic meter, while the density of liquid phase varies from 570 to 600 kg per cubic meter.

In that way the technology significantly excludes the chemical stabilization as the hydrocarbon gases possess low rates of surface tensions and viscosity. It provides a high solubility for the proppant during the recovery. On the stage of production the pressurized LPG mixture creates microfractures in the parent shale rock. Then under the effect of reduced pressure and higher temperature beneath the surface it turns into gaseous phase. This physical process provides the technology several benefits: due to expanding capacity of the gas state of aggregation it opens larger gashes in the rock, does not clog and creates more space for gaseous mixture to gush out. In the end of the extraction stage propane and natural gas together are pumped back to the surface for separation and natural gas is transported to the preliminary gas processing terminals.

The advantages of propane fracking technology.

1) The water world resources during last decade have been considered by scientists as decreasing and difficultly renewable. As fresh water resources are distributed unevenly in the crust, wasteful consumption can lead to aggravation of the global problem. For the first injection in 500,000 active gas wells in the USA 72 trillion gallons of water (272,000,000,000,000 liters) are required. Statistically, in the 2014 only in the USA alone hydraulic fracturing was executed over a million times.[2]

Propane fracking technology is non-hydraulic. It does not only exclude the problem of consumption, but noticeable increase impact on subterranean waters and seismic activity.

2) The chemicals used in fracking vary from hazardous to extremely toxic and cancerogenic such as benzole or formic acid. The most positive assessments say that about 50% of fracturing water fluid is remained unextracted from the reservoir. Due to high fluidity the penetration of flowback into the upper layers of the rock is uncontrolled process. In the extraction fields there is a phenomenon of large-scale pestilence of wild animals and fish. Among residents there is a registered risk of such diseases like asthma, poisoning, cancer, headaches, loss of consciousness, neuropathy and other internal organ and skeleton infections. Moreover, the traditional hydraulic fracturing practically causes the discoloration of tap water and its ignition. In the South states of the USA special equipment of protection respiratory system and face form poison emissions are required.

But production problem is the indispensable utilization of recovered 50%. The process usually can not be performed in compliance with ecological standards. The contamination of flowback is so severe that it is not completely refined in a treatment plant.

Due to its light properties, 95% of propane flow is recovered. On the surface the recaptured mixture is separated and propane is merged into the flow for the second use again. It is called the circulation system and means the absence of the flowback and its utilization.

3) According to the listed physical characteristics of LPG, propane fracturing creates effective fracture length, provides faster transportation of sand and does not generate clay swelling and pore plugging what abates flow competence and reduce the gas well yielding. All these properties establish a long lifetime of the well.

It is discovered that one injection of LPG slurry achieves the same result as the one-eighth part of the water liquid.

The disadvantages of the propane fracking technology

Each technology even with the high quality of production doesn’t exclude the drawbacks. In the propane system it is the superior protection and suppression of flaring, as all the hydrocarbon gases are ignitable. Explosive limits of propane equal 2, 2 – 9, 5% of concentration in the air and the ignition temperature ranges between 450-500 °C. But returning to the water-based fluid, it should be mentioned that it also includes fire accelerators with even lower physical properties of ignition. Among them are benzene (0, 7-5%, 270 °C), toluene and others.

Otherwise there were not been invented and put in operation monitoring and shutdown systems, visual and thermal cameras, pressure transducers that identify fluctuation and provide improved sealing of the equipment.

All the significant disadvantages are turned to economical concerns. Propane fracturing costs one and a half times more expensive than the traditional water fracking, and it will only end when the fresh water stops being the cheapest source for investigating. Nevertheless, the method has already been actuated over 2500 times in Canada and the USA by energy service GasFrac company, that act as a patent holder for the technology.