Suicide is one of the major medical and social problems of modern society and is therefore an object of thorough studies (6, 9, 12, 14, 16, 17, 18). As an invariable part of biosphere, man depends of the changes that occur in it. Climate, temperature, atmospheric pressure, seasons, months, and even days of the weekare risk factors for a number of diseases and apparently affect suicidality, too. The effect of chrono-biological and environmental factors on the suicide rate has been in the focus of the studies in recent years(1, 2, 5, 7, 8, 9, 10, 13, 14, 15, 17, 18).

The AIMof this study is to establish the influence of environmental factors and chrono-biological cycles (seasons, months, days of the week andparts of twenty-four-hour periods)on suicidality in the Region of Smolyan.

MATERIAL AND METHODS:The main methods used in the study are the historical and statistical methods (3, 4). Use has been made of information from the suicide autopsies conducted at theDepartment of Forensic Medicine of Dr. Br. Shukerov Multi-Profile Hospital for Active Treatment AD, Smolyan, over a period of 10 years.

RESULTS:The Region of Smolyanis a mountainous area with mixed population and increased migration, in which in 2009 suicide index had the highest rate (11). Over the period 2000-2009, 143 cases of suicide were registered in theRegion of Smolyan(11).

The cases are unevenly distributed in the seasons and two clearly outlined tendencies can be seen in their dynamics: the highest percentage of suicides is observed in autumn(30.07%), and the lowest–in winter(16.08%) (Fig. 1).

SEASONAL DISTRIBUTION OF SUICIDES BY GENDER 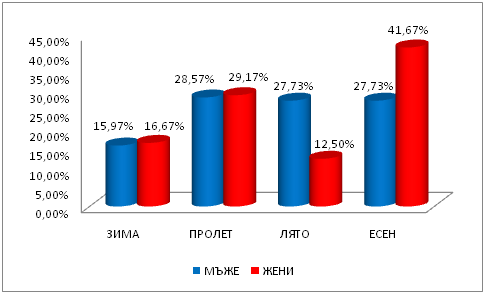 The relative share of male and female suicides during the different seasons varies broadly. The dynamics of male suicides in spring (28.57%), summer (27.73%) andautumn(27.73%) shows steadiness, reaching its lowest value inwinter (15.97%). Two peaks can be observed regarding female suicides – the higher one inautumn(41.67%) and a smaller one inspring(29.17%) (see fig. 2).

SUICIDALITY DYNAMICS DURING THE MONTHS OF THE YEAR 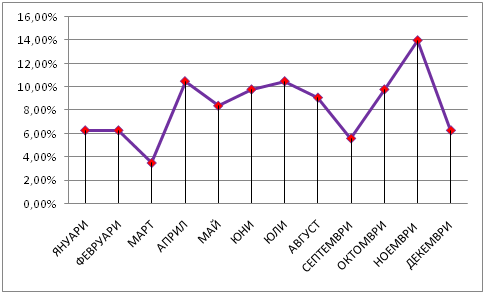 The maximum level of suicidality is reported for November (14.00%). During the spring and summer months, relatively close suicide rates (9-11%) are reported (see fig. 3). 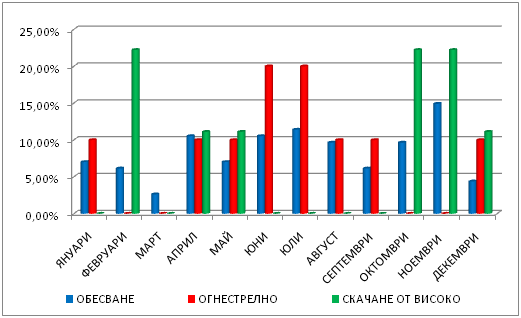 In theRegion of Smolyan, 79.72±3.36% of all suicides from the 10-year period under investigation were committed by hanging, whereas the cases of suicide by using firearms were 6.99%, and suicides by jumping from heights – 6.29%. Suicide dynamics has great variations during the different months,reaching its maximum level in November (14.5%), whereas firearm suicides show maximum and same levels in June and July (19.5% each), and peak levels for suicides by jumping off heights are observed in February, October and November(22.5% each) (see fig. 4).

DISTRIBUTION OF SUICIDES AMONG THE DAYS OF THE WEEK 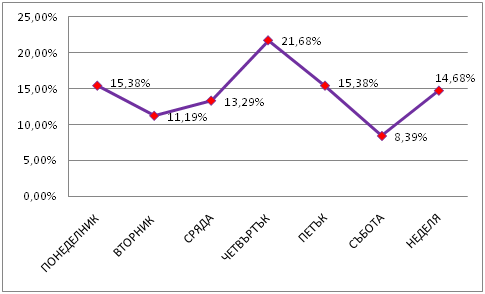 The distribution of suicides among the days of the week shows that their number is the largest in the middle of the week – on Thursday(21.68%), and the smallest on Saturday (8.39%) (fig. 5). 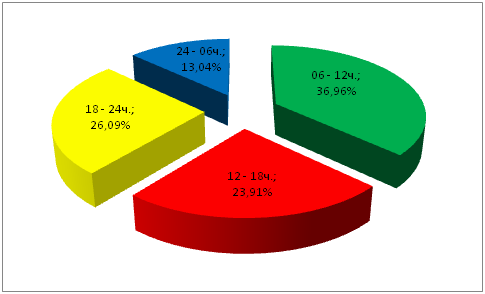 Seasonalityin suicidal behaviour is an arguable matter with partial correspondence. Research shows different seasons of occurrence of suicide maximum rates, where the spring and summer seasons include the majority of the cases. Studies conducted in Bulgaria confirm this data (5, 8). In the Region of Plovdiv,a peak in suicides is observed in the spring and summer seasons (1, 5, 6, 10). The information gathered about theRegion of Smolyandetermine2seasonal peaks of suicides– spring and autumn. Despite of the fact that both regions(Smolyan and Plovdiv) are in the South Central Area of the country, they are characterized by different climatic conditions, which is reflected on the seasonal distribution of suicides. With the arrival ofautumnand the deterioration of weather conditions, neurotic, psychotic and other health problems appear and worsen, and they could be one of the reasons for suicidality.

Unlike other studies conducted in Bulgaria indicating the month of May, (5, 8), the current study shows that the largest number of suicides in the Region of Smolyan are committed in November. Risk months for the Region of Plovdiv are the months of May, June and July (1, 6, 10).

The three most popular suicide methods in theRegion of Smolyan: hanging, firearm injuryand jumping off heights,vary in their distribution over the months and differ from the data about the city of Plovdiv. Just like in the Region of Plovdiv, hanging deaths in theRegion of Smolyanhave almost equal distribution during all of the months, but differ by the month of occurrence of their maximum number. The number of suicides committed by using firearms and by jumping from heightis small, so the data gathered is not subject to accurate interpretation.

The day in which the largest number of suicides are committed in theRegion of Smolyanis Thursday, which concurs with the findings of other studies, but does not correspondto the information published about the Region of Plovdiv (5, 8, 7).

In theRegion of Smolyan,the suicide maximum is observed during the morning hours, which correspondsto the published information about the country and abroad (1, 6, 7, 16).