Demography is a science of the population. In the contemporary stage of its development, demography has many specialized methods of input data processing, obtained mainly in the governmental statistics system.[1;2]

The results of the demographic analysis show the trends of the demographic development in its different aspects – regarding birth rate, death rate, marriage rate, divorce rate, migrations, etc.[4] The interpretation of those results in connection with the development of other social spheres, the drawing of realistic prognoses, conclusions and recommendations towards the social practice and policy – all this requires the knowledge of the main theories of the population within the society.[5;7]

Objective of the present article is the study of some demographic indices of the population in Plovdiv district.

The subject of observation is Plovdiv district. The logical unit is the population of Plovdiv district. The survey is retrospective over a 6-year period from 2010 to 2015 inclusive. Quantitative and qualitative indices have been used for the analysis. The primary information has been derived from the annual reports of the National Statistical Institute, the Ministry of Health and the Regional Health Inspection of Plovdiv. For the statistical processing of the collected primary information the variational, alternative and non-parametric analyses have been used. The computer processing of the collected data base involved the use of the statistical package SPSS version 19 and MicrosoftExcel

Plovdiv district is located in the central part of Southern Bulgaria, occupying an area of 5972.9 sq.m., equal to 5.4% of the territory of the Republic of Bulgaria. It is one of the regions most favoured by nature. The district has a convenient transport geographic location, has a high natural, economic and human potential, favourable bioclimatic resource, high-productive cultivated lands, thermal mineral water, very rich cultural heritage. The favourable geographic location of the district is supplemented by the availability of an established infrastructure for transport access. The territory of the district comprises the southern slopes of the Balkans, the Pazardzhik-Plovdiv field, the forest massive of Sredna Gora and the Northern Rhodopes, mountain river valleys and rivers. In a climatic aspect the region is not homogeneous – in the flat areas it is transitional continental and in the high areas – mountainous. 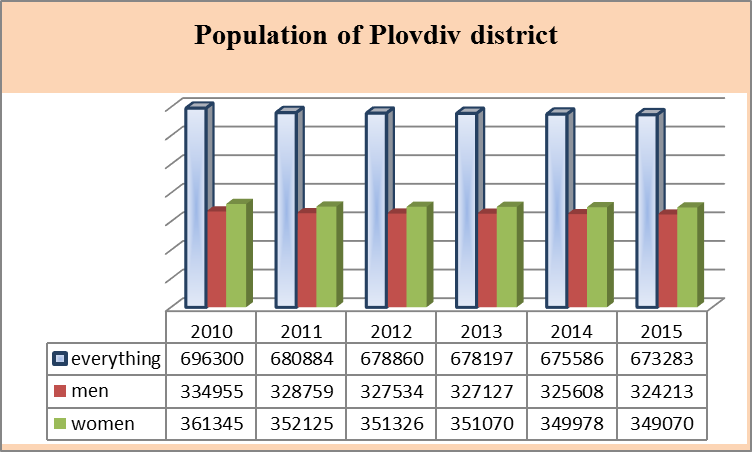 The long-lasting tendency of prevailing of the relative share of women (52%) over men (48%) is still preserved.

The age structure of the population in Plovdiv district corresponds to the general specification of the Republic of Bulgaria (Chart 2). The process of demographic aging continues. Within the 6-year period of observation the following facts have been reported: 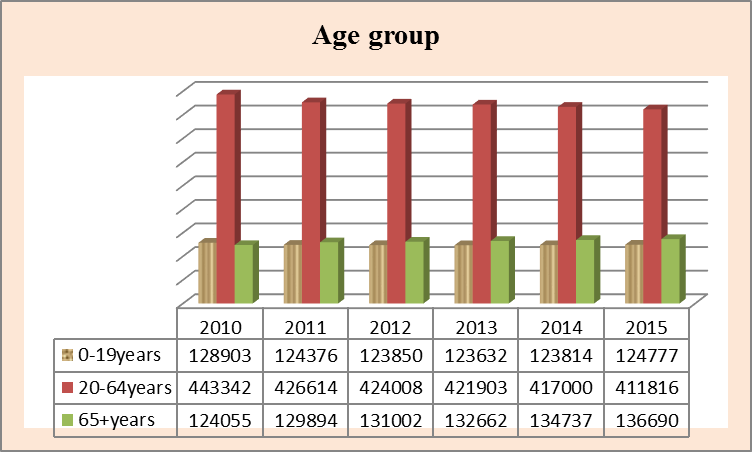 The people living in the cities within the district constitute 74.9% while those in the villages – 21.5%.

The tendency of birth rate in the district of Plovdiv marks a downward trend: from 10.3%о in 2010 to 9.9 %о in 2015. The birth rate is significantly influenced by the share of women at childbearing age, which decreases.

The unfavourable dynamics of births and deaths leads to decrease in the natural growth of the population which has a permanently negative value in the analyzed time period (2010-2015 inclusive). Last year the natural growth rate in the district was (-4.8) (Table 1).

The main reason for the deaths during the analyzed period of time (2010-2015) in the district of Plovdiv remains the diseases of the blood circulation organs, with intensity of 935.7 per one hundred thousand people of the population in 2015, marking an upward trend during the observed time span (Table 2).

The deaths due to new formations with intensity of 270.6 per one hundred thousand people in 2015 occupy the second place.

The list of causes of death is supplemented by: diseases of the digestive system, diseases of the respiratory system, external causes of morbidity and mortality, signs and deviations of the standard, found during clinical tests, not classified anywhere else.

The registered cases of active tuberculosis in the district have decreased in the last five-year period. The newly discovered cases are 20.3 per 100 000 people for 2014 and are below the average for the country – 23.2.

As of 31 December 2015 in the district of Plovdiv there are 34 hospitals (compared to 29 in 2010), 200 outpatient»s medical institutions, a complex oncological centre, a mental health centre, a skin and venereal centre, emergency centre, a transfusion hematology centre, a dialisys centre, a medical and social care home for children and three hospices.

At the end of 2015 the population of the district of Plovdiv was served by 425 general practitioners. One GP serves 1584 people.

The above analysis leads to the following conclusions: