Suicide is an important social, medical and psychologicalproblem of modern society. A number of studies have focused on the wide range of risk factors determining suicidal behavior[2,8,9,10,13,14]. In the majority of the cases, suicide is committed by mentally sane persons, which proves that the suicide death rate for a particular territory can be interpreted as an indicator of the social welfare of the population [15].

One of the factors affecting the suicide rate is poverty or financial stress. The social and economic condition of individual areas significantly determines the distribution of suicides[2,11,12,13].

The highest suicide rates in the Republic of Bulgaria are registered in the South central area, which is also the largest one[2,7]. Its territory includes the Region of Plovdiv,which is the largest region, the Regions of Kardzhali and Smolyan, which being the smallest in the area are most strongly affected by the overall deterioration of the economic situation in the country.

The aimof this studyis to examine the main tendencies in thedynamics of the suicides committed in the Regions of Plovdiv, KardzhaliandSmolyanover the period 2000 – 2009.

The object of this study is the committed suicides which were registered in the Regions ofPlovdiv, Kardzhali и Smolyanover the period 2000 – 2009.

The historical method of choice has been used for the collection of input information. The statistical data used is courtesy of the National Statistical Institute, the Employment Agency, as well as from literature sources[1, 2, 9, 10, 11 ,12, 18, 19].Alternative, variationand graphical analysis has been used in the statistical processing of information [3, 4].

The suicide situation in the Republic of Bulgariaover the period 2000 – 2009 is characterized by a gradual decrease in the suicide index rates (%ооо). Comparative analysis of the suicidesin the regions ofPlovdiv, KardzhaliandSmolyanand comparison with the national rate shows high levels of suicide index at the beginning of the period under investigation. The registered suicide rates for the three regionsgo down with certain fluctuations until 2007 – 2008, followed by a rise, which is contrary with the observed tendency for Bulgaria (Diagram 1). 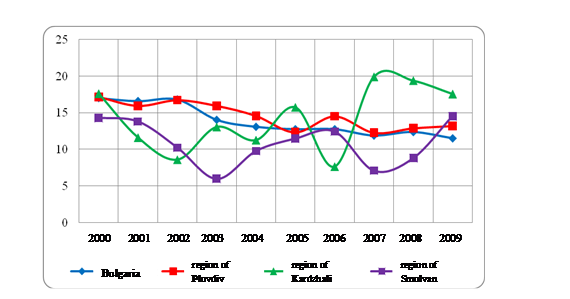 Diagram 1. Dynamics of the suicide index in the Republic of Bulgariaand 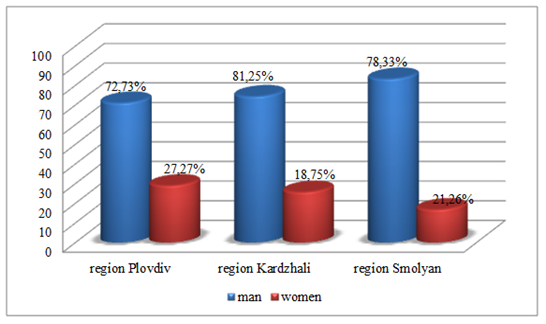 The comparative analysis of the data presented inDiagram 3 shows that the majority of suicidesin the Region ofPlovdivlive in citiesand only 1/3 of them are rural inhabitants. 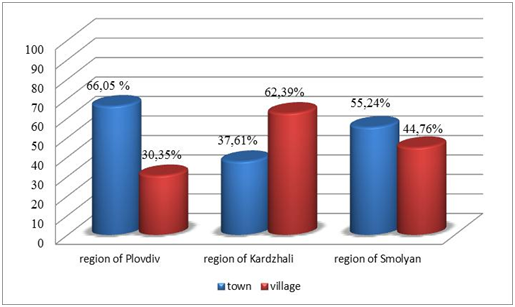 Diagram 3. Distribution of suicides by place of residenceover the period 2000 – 2009.

In theRegion ofKardzhali, significantly higher rates of suicides are established in rural areas, whereas in the Region ofSmolyanno significant difference is registered (Diagram 3).

The analysis of the age structure data of the suicides committed in the Regions ofPlovdivand Smolyancertifies that persons in active working age (45-64) prevail among the suicides, and in theRegion ofKardzhalisuicides are within the 20-44 age range.As is obvious fromDiagram 4, the suicides committed by children and adolescents (0-19) are insignificant in terms of numberin all threeregions under investigation (Diagram 4). 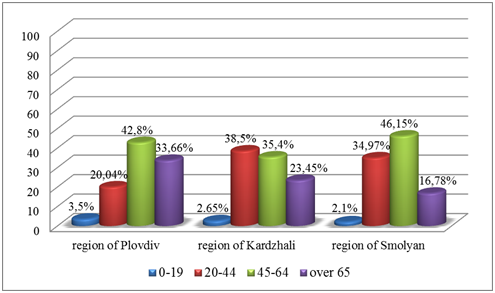 The tendencies for suicide activity increase found in the regions under investigation are significantly determined by the social and economic situation in the country. The unemployment dynamics in the three regions was on the decrease until 2008, but in 2009 it grew, having its highest rate in the Region ofSmolyan (Diagram 5).It is important to point out that the unemployment percentage in the Region ofSmolyanis one of the highestin the Republic of Bulgaria.

The conducted comparative analysis of the suicide activitydataover the period 2000-2009shows a decreasing dynamics of the suicide index in thethree regions. Most probably this finding is related to a certain stabilization of the economic situation in the country, especially after the accession of Bulgaria to the European Union. Regardless of this generally positive dynamics, suicide activity levels in the Region ofPlovdivat the end of the periodexceed the national levels. The high rates of suicide activity usually bespeak unfavourable economic situation [2,13]. The increased values of the suicide index are probably the result of the setting economic crisis in Europe, which affects most significantly the economy of poor regions.

In a number of countries in the world, as well as in different areas in the country, suicides among men dominate over women [2, 6, 10, 14, 16,17]. Differences are registered in the male and female suicide ratio in the three regions under observation.Interestingly, in theRegion ofSmolyan, registered suicides among women are five times less than male suicides. Probably, this is due to the preserved patriarchal way of living in the region, as well as the influence of religion.

It has been established in a number of investigations that suicides committed by rural inhabitants exceed those committed by urban inhabitants [3, 9, 10, 12,13]. Regardless of the fact that the number of suicides among the rural population in the Region ofPlovdivis smaller than the number of suicides among urban population, due to the depopulation of rural areas, their suicide index is higher [12]. The increased suicide activity in rural areas is determined by the specific nature of life in rural environment: patriarchal remnants, restriction, difficult adaptation, widespread deficiency, etc.

The majority of suicides in the three regions were committed by persons in working age (20-64), which corresponds to the data gathered for other areas of the country[2, 3]. In theRegion ofPlovdiv– 62.84±2,23%, in theRegion ofKardzhali 73.9±1,22%and in theRegion ofSmolyan – 81.12±1.36% of all suicides committed in the relevant region. The age characteristics of suicide distribution concur to a certain extent with the global tendencies, according to which the highest suicide rate is traditionally registered with the senior age groups (therefore it is accepted to consider the age after 45 as a relative suicide risk factor) [2,3,13].The increased relative share ofsuicides committed by retired persons in the Region ofPlovdiv could be accounted for with the difficulties they have, insufficient pension size, health conditions, loneliness, loss of close people, etc.

The global economic crisis had its first direct and indirect impact on Bulgarian economy at the end of 2008. Until then, the unemployment rate was on the decrease, which corresponds to the decrease of the suicide index in the three regions. In 2009, the unemployment rate went up in the regions, and the suicide index went up along with it too.Unemployment is one of the reasons for the increased number of male suicides and for the suicides committed by persons in working age, because it affects directly the family budget. It is very difficult for men and women above the age of 45 who have been made redundant to find suitable employment and to adapt, therefore the number of suicides committed by this groups is the largest.

Economic problems have a major impact on the suicide rate in the regions ofPlovdiv, Kardzhali и Smolyan.