Endometriosis is a common benign gynecologic pathology defined as an ectopic localization of endometrial tissue. It can affect any woman from promenarche to postmenopausal period.

Endometriosis is divided in two types according to the localization: endopelvic and extrapelvic [16, p. 53]. Within the abdomen, endometriosis can be classified as intraperitoneal or extraperitoneal. When located 5 mm under the peritoneal surface, it is defined as deep infiltrating endometriosis. Endometriosis affects most commonly the ovaries (30%), the utero-sacral and large ligaments (18%-24%), the fallopian tubes (20%), the pelvic peritoneum, Douglas’ pouch, the appendix and the small and large intestines [7, p. 6677]. According to the pathological reports, the incidence of soft tissue endometriosis is 2.8%, of gastrointestinal endometriosis is 0.3%, and of the urinary tract- 0.2% [8, p. 53]. Endometriosis rarely affects extraabdominal organs, such as the lungs, urinary system, skin and central nervous system [6, p. 3431].

There are three theories for the  pathogenesis of endometriosis: theory of metaplasia, theory of dispersion of the endometrium and theory of induction. The first theory was proposed by Meyer in 1903 and refers to metaplasia of the peritoneal serosa [3, p. 37]. According to this theory, the development of endometriosis is a result of inflammatory or hormonal factors, which cause tissue differentiation of mesothelial cells of the peritoneum in endometrial glands and stroma. This theory can explain the development of endometriosis in distant organs. The second theory is that of endometrium dispersion- during the menstruation, retrograde dispersion of living endometrial cells can occur in the peritoneal cavity and ovaries. The third theory is that of induction. According to this theory, unknown substances are released from the endometrium and cause transformation of undifferentiated mesenchymal cells to endometrial tissue [9, p. 194].

44 years old woman presented with chronic pelvic pain and chronic obstipation was firstly admitted to the Department of Obstetrics and Gynecology and later- to the Surgical department of  Pulmed Hospital- Plovdiv. During the performed surgical intervention a consultation with a surgeon was needed prior to tumor formation of the rectum. The intervention included rectal resection and termino-terminal anastomosis. The patient had a history of supravaginal hysterectomy 4 years ago.

The specimens were fixed in 10% formalin and embedded in paraffin. Serial sections cut from the paraffin-embedded blocks were used for routine histopathology with Hematoxylin-Eosin staining and immunohistochemically analyzed for the expression of E-cadherin. 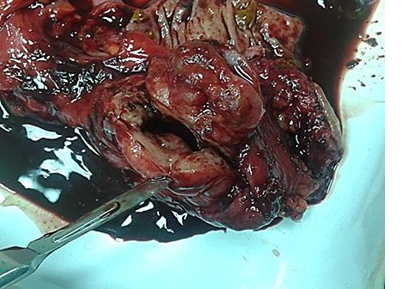 Fig. 1. Endometrial cyst with hemorrhagic content inside the rectal wall.

The histologic examination showed rectal endometriosis- cystic degeneration with presence of endometrial glands and stroma inside the rectal wall (Fig.2). 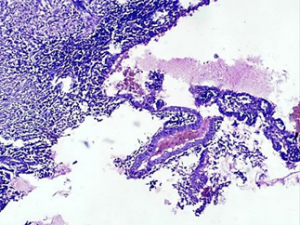 The immuohistochemical E- cadherin expression in the ectopic endometrial glands showed 1+ (low-intensity immunoreactivity of more than 10% of the epithelial cells)(Fig. 3). 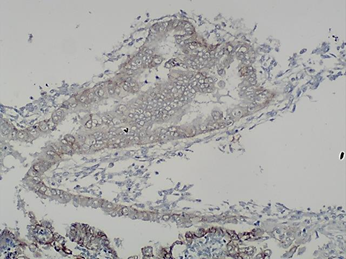 Fig. 3. Immunohistochemical E-cadherin expression in the ectopic endometrial glands, magn. х100: 1+ (low-intensity immunoreactivity of more than 10% of the epithelial cells).

Endometriosis is an estrogen-dependent inflammatory dysfunction first described by Rokitansky in 1860 and characterized by the presence of glands and stroma that histologically resemble functional endometrial tissue but are located outside of the uterus [11, p. 431].

This condition shares a number of features with cancer such as its stem cell-like activity, the ability to evade apoptosis and to induce angiogenesis, as well as the intrinsic self-regulation of its rate of proliferation. Such properties can be explained through the molecular signals between the cells which regulate the intracellular signaling cascades. This allows the population of ectopic cells to survive within its new tissue environment [12, p. 579].

Endometrium is derived from intermediate mesoderm via mesenchymal-epithelial transition during the development of the urogenital system. By retaining some imprint of their mesenchymal origin, endometrial epithelial cells may be able to return to this state, via epithelial-mesenchymal transition [10, p. 718]. To facilitate its attachment, endometrial tissue can induce epithelial-mesenchymal transitions in mesothelial cells. The capacity of the endometrial tissue to invade and acquire a blood supply contributes to the implantation process. After implantation, local production of estrogens provides continuous, ovary-independent growth stimulus [1, p. 238].

The presented case is particularly interesting because of the unusual location of the endometrial implant, mimicking tumor of the rectum. The immunohistochemical E-cadherin in the presented case is 1+ (low-intensity immunoreactivity of more than 10% of the epithelial cells). This result may be explaned with the process of epithelial-mesenchymal transition and may suggest invasive growth of the endometriosis.

The diagnosis of gastrointestinal endometriosis can be challenging. The clinical presentations can vary widely, depending on the localization and mimicking tumor processes. Because endometriosis is a benign process with the ability to metastasize, the epithelial- mesenchymal transition can be involved in its pathogenesis.