As the scientists point out, on the basis of hydro-geological and hydro-chemical information, there are three ecological water types on the territory of the West Georgia: well maintained, poorly maintained and unmaintained.

Bacterial pollution, which is characteristic for the western part of Georgian rivers and the Black Sea coast, is most significant in areas where water supplies used by factories are directly dumped into the rivers and sea.

The ecology of the Black Sea cost drew a great deal of attention. Following an international index, there are three zones of Georgian waters: normal waters, with an index of 0, 75 – 1, 25; polluted waters with an index from 1, 25 to 1, 75; and severely polluted waters, with an index of 1, 75 to 3, 0. The first zone is deeper in the sea, closer to the neutral waters. The second zone covers almost the entire coast of the Black Sea. The third zone is located in Batumi and Poti seawater areas where there as intensive shipping activity. However, the researchers make it clear that one of the causes of the geo-ecological imbalance is natural geo-dynamic activity, which includes floods, avalanches, landslides, and other similar processes.

After analyzing all the geo-environmental data of the coastal strip of the Black Sea, we can say that the natural marine pollution occurs by hydrogen sulfide and methane (Table 2). Sea water pollution is also caused by other anthropogenic activities. The extent of contamination is usually dependent on the intensity of industrial processes (pollution of river waters and the coastal strip of the sea, marine pollution with household waste (Fig.1), bacterial contamination, etc. 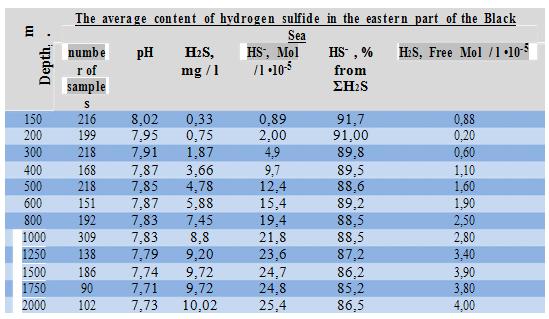 As a result of our studies, in marine and river sediments there are observed arsenic (As) and cadmium (cd) at high concentrations (Fig. 2.A). Also noteworthy is the quantities of zinc (Zn), lead (Pb), nickel (Ni) and cobalt (Co) and its high concentrations (compared to Standard (1)) in river bottom sediments of Rioni River basin area (Fig. 2.B: 2.C.). Among the heavy metals in river sediments relative stability preserves copper (Cu), and occasionally exceeds the permissible content (Fig. 2.B). Particularly, noteworthy is a content of manganese (Mn) in river sediments and respectively in the coastal sea water (near the city of Poti). A manganese concentration in several major rivers that wash Chiatura mine sometimes reaches eight admissible norms (Fig.2.D). Although, here we must note, that the recent situation of water pollution by manganese has seriously improved. It should be noted that most of these lands (Rioni River basin area) are irrigated by the waters of rivers, which are used for grazing and drinking water for pets. These results, in many cases certainly cause concerns.

Natural radiation also poses a serious danger to the geo-ecological situation. Natural radiation is closely related to the presence of nuclides in Uranium (U), Radium (Ra), Thoriun (Th) and Potassium (K). In West Georgia there are natural radiation anomalies, which had been studied only for military purposes during the Soviet era. These anomalies are mainly found in areas near settlements and as we have learned, are associated with Paleozoic and Jurassic granitic rocks, Lower Jurassic shale’s, with phonolites of Cenozoic era and Mid-Jurassic coal veins and some other breeds. Typically, the background radiation in these rocks varies from 22 to 30 microroentgen per hour (μR/h). 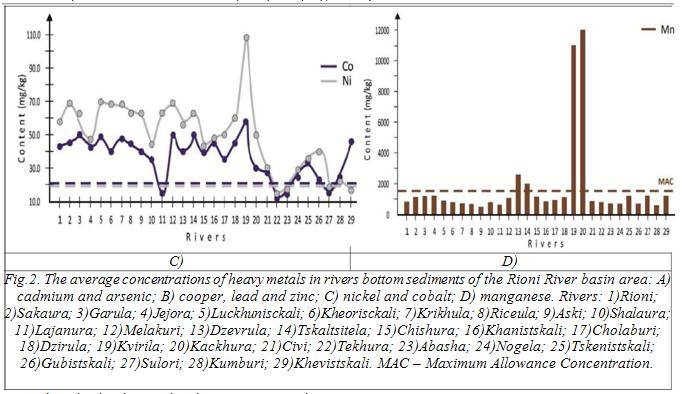 The scientists have pointed out one more serious problem – after the Chernobyl disaster in 1986, technogenic radioactivity was detected in some areas. Radiometric measurements taken in 1987-1989 demonstrated that after the Chernobyl disaster, most noticeably, the western part of Georgia was polluted by radioactive nuclides. In some parts of the Black Sea coast, the pollution reached 30-60 μR/h and in some other areas the pollution reached 90-225 μR/h, whereas the Maximum Allowance Concentration (MAC) for the radioactive pollutants is 10-12 μR/h.

Our measurements in all the municipalities of West Georgia, which are shown in Fig. 3, indicates that these territories today are less polluted by radionuclide’s, but still need continuous ecological monitoring. It also should be noted that in all the places that we have observed, the higher rates of background radiation is in the bushes of tea and eucalyptus trees. Obviously, these plants are characterized by excellent accumulation of radionuclides. 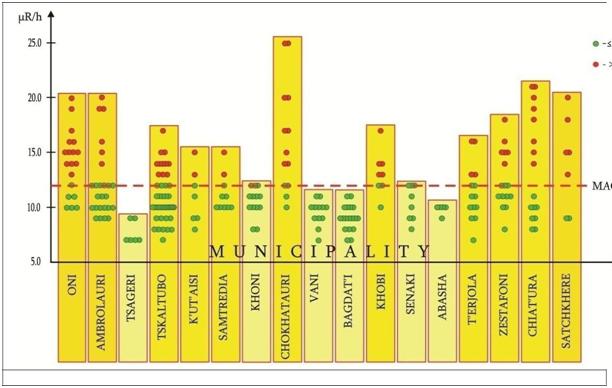 Fig.3. Schematic drawing of the measurement results for the radiation

Despite the above listed negative ecological phenomena, there is ecological stability in the West Georgian territories. The ecological situation in Chiatura and Zestaponi can be taken as an example. The ecological stability in these areas can be explained by the fact that mining activity in Chiatura manganese deposits has decreased, and this has had a positive impact also in Zestaponi mining factory areas as well. Another noteworthy positive change is an ecologic progress in agriculture. Reducing chemicals and using organic fertilizers had a significant positive impact on agriculture in terms of harvest collecting and ecological quality of the crops. To conclude, we can state that the West Georgian territory is ecologically stable with a relatively normal purity index. But for final conclusions, a geo-ecological research requires constant study in the mentioned regions. In this, we find it convenient to carry out the Geo-ecological monitoring of this area of Georgia.

After analyzing all the data and existing early maps (2, 3, 4, 6), we were able to create a geo-ecological map of West Georgia in a scale of 1:500000, on which the current situation of natural and technogenic pollution of this region of West Georgia is shown (fig. 4). The map shows activities that are rated with high scores, and that have caused changes in the landscape. The eco-abnormal areas indicated on the map are local in nature and can be easily eliminated off. A particular emphasis should be made on fresh surface and ground waters that are genuinely priceless for Georgia. If we take other countries experience into consideration, in our opinion, it is vital to tighten ecological standards (8) for water quality.