Thedevelopment of IE in Uzbekistan was characterized on the performance on the enlarged meeting of the Cabinet, devoted to results of social and economic development of the country in 2015 and the most important priority directions of the economic program for 2016 by the President I. A. Karimov who has noted that: «Today about 5,5% of world GDP fall to the share of ICT. For example, in the Republic of Korea it makes over 11,8%, in Sweden – 7%, the USA – 6,8%. In spite of the fact that in recent years the sector of ICT of our economy develops by advancing rates, it is necessary to recognize that we are only at an initial stage – only about 2% of GDP fall to the share of ICT. At the same time we have all necessary resources and opportunities for the accelerated development of this sector» [1].

Hypothesis of research is based on the growths of a rapid development of information sector of Uzbekistan IE willhold a leading position. An objective of this research is study and the analysis of development of IE in Uzbekistan at the present stage of world informatization and identification of the main problems of its development. The position of the author is that Uzbekistan is at an initial stage of transition to IE and the author is convinced of insistent carrying out large-scale comprehensive investigations.

Today there is a set of methodological approaches of an assessment of IE, but there is yet no technique by whichmeans it could be possible to analyses in all aspects. Development of IE is characterized by a number of such indexes as innovative indexes (economy of knowledge (KEIKI), innovations (GII)), an index of readiness for the electronic government (E-government development Index, EGDI), indexes of the market of ICT [2]. Value of an readiness indexfor the electronic government is calculated by a special technique, which basis of three main indicators:

1.Online communication in a network of government agencies (web presence);

IE represents new economy which is directed to expansion of the opportunity for thehuman development and also promotes growth of welfare thanks to application of information, knowledge and innovative technologies [3]. Processes of generation, processing, accumulation and information transfer through ICT fall within the scope of IE functioning. They are carried out between the producers of information, the equipment and information translators, its consumers, the state and civil society integrated into networks. The main driving force of IE is production and consumption of information product, which demand and supply in the market will be defined by specific factors and theoperation mechanism of market laws. IE isbased onthe negentropy principle of information, which assumes existence of registrationdefinitions of perfection and is realized according to the principles of unity of the world and universal communication [4, p. 42]. The sphere of IE includes Information society and space, ICT and different types of production, the rendered services, production and non-productive infrastructure [5, p. 50].

Such scientists as F. Makhlup, M. Kastels, D. Bell, E. Toffler, A. Mol, J. Stigler, J. Gelbreyt, V. B. Korneychuk and others devoted own works to research of information society [6,7,8,9,10]. The substantial analysis of IE has been presented in the works of such scientists as M. Porat, D. Bell, U. Dayzard, M. Kastels, M. Konnorz, U. Martin, A. Norman. Category IE has been introduced in the science circulation 1976 by the American in economist M. Porat and one year later its main problems were analyzed by him [11, p. 71]. For this type of economy existence of the prevailing in economy information sectors [12, p. 130] was the key characteristic. Thanks to Spanish-American economist M. Kastels, which in 1996-1998 has published the three-volume monograph «Information era: economy, society and culture»the term IE was included into a wide turn. By periodical criterion formation of theories of IE includes three periods: origin and identification of tendencies in development of IE, as new phenomenon (1960-1970th); intensive development of IE in the developed countries (the 1980-1990th); development of the theory of IE in interrelation with economy of knowledge (since 2000).

The present stage of evolution IE belongs to the period of formation and is characterized by high dynamics of development and the maximum uncertainty of the future. While comparing traditional, industrial and information economy, respectively lead the branches of extracting, manufacturing and science act. Development of IE requires increase in a share such informationcapacious of services sectors as education, information and communication and intellectual services, development of innovations. Therefore in the conditions of development of ICT demand for highly skilled workers and intellectuals increases.

Nowadays it is possible to note a number of the features characterizing development and domination of IE:

1) Knowledge and information are the main parts of the created cost of production and the rendered services. To indicators it is possible to refer growth of knowledge– based manufactured products, increase in costs of researches and developments, increase of balance weight of ICT in GDP, excess of total expenses of ICT over others;

2) Growth of balance weight of workers in the sphere of ICT to 50% and more from all employable population of the country [15, p. 209];

3) Fast aging of equipment and technologies, marketing ideas and transformation of unique products into ordinary;

4) Increase of management role in control of ICT;

6) New information technologies are being implemented in all branches of economy and households;

The rapid and stable growth of costs of science noted in the last report of UNESCO on development of world science [16] is a direct consequence of development of IE in the countries of the world. Gross domestic expenditures on scientific researches and experimental design developments (Research and development) have grown in comparison with 2007 by 31%, having made in 2013 1478 billion USA. The highest level of knowledge intensity is recorded in such countries as Israel (4,21%), South Korea (4,15%), Japan (3,49%), Sweden (3,42%), Finland (3,32%) and Denmark (3,05%). For the developed countries the level of knowledge intensity has the wide range of dispersion — the USA (2,81%), Germany (2,94%), Italy (1,25%), Canada (1,63%), etc. In the report is also notedfreezing or decrease in the public expenditures in a number of such countries as Italy (1,25%), Great Britain (1,63%) and France (2,23%). Among developing countries for the last decades China (2,08%), where the number of publications in 5 years has grown twice, has considerably increased knowledge intensity. Among the Central Asian countries the highest level of knowledge intensity is presented in Uzbekistan (0,41%). Other indicator, which is indirectly characterizing the condition of information economy, belongs tothe services sector. Luxembourg (86%), France (77,6%), the USA (79,6%), Belgium (76,1%), Great Britain (74,5%) belong to the countries, which share of the income from services sector makes a considerable share of GDP. The shareof services sector in GDP of Uzbekistan makes 54,5% [1]. Besides, it should be noted that costs of information development in the USA 2,7% of GDP makes (more than 400 billion USA), the European Union — 2% (270 billion The USA), Japan — 3,4% (150 billion USA) [17]. At the same time technological level of the USA exceeds Japan level by 2,5 times, Germany — by 3,6 times, Great Britain — five times [18, p. 118].

Amidst the CIS countries it is possible to mark out knowledge intensity level of Russia (1,12%), which formation and development of IE can be subdivided into four stages [19]:

2) Mass introduction of information technologies and the standardized systems;

3) Prevalence of information sector over all other branches of economy;

4) The dominating prevalence of production of information and knowledge.

The history of development of ICT in Uzbekistan is also characterized by 4 stages [20, p. 268]: 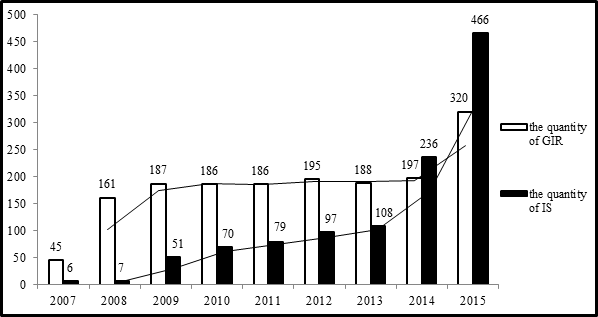 Fig. 1. Dynamics of registration of GIR and IS of government bodies.

Presented day in Uzbekistan is observed dynamics of consecutive growth of quantity of the state information resources (GIS) and the information systems (IS) of government bodies, which are used for automation of activity of the organizations and rendering electronic services to the population, and also subjects of business (see fig. 1) [21].

For January 1, 2016 the number of domains in the zone «UZ» made more than 25,2 thousand units, and the quantity of educational resources in the ZiyoNET network has reached 109 thousand. More than 260 types of modern services for the population and subjects of business are introduced successfully functioning Uniform portal of interactive state services. Since the beginning of 2015 the total of the rendered interactive services has exceeded 400 thousand. Today 100% of the tax and statistical reporting are giventhrough the Internet in electronic form. Electronic declaration of goods and registration of export-import contracts has allowed to accelerate customs registration of goods and rendering other accompanying services from 3 to 1 working day. By 2,3 times has increased the number of online transactions made in the Internet, for example, online tax payments, obligatory and utility payments. Today 68,8% of the population of Uzbekistan are provided with access to digital television and an opportunity to watch 12 digital TV channels.

Assessment of an index of development of the electronic government in Uzbekistan [22, p. 55].

The carried-out analysis shows that the strategy of development of National information and communication system of the Republic of Uzbekistan shows positive dynamics of active growth. The share of ICT begins to exert considerable impact on economy in general. Active introduction of ICT leads to transformation of a role of information, structural disproportions in labor market, to growth of interdependence of functioning of one branches from others, to increase of a role of knowledge intensity of economy and services sector of the republic. Today monitoring and the analysis of these processes isn’t carried out. These and other reasons are the basis of carrying out large-scale scientific researches of formation and development of IE in Uzbekistan.