Summary. The pathophysiological assessment of the treatment results of the third degree skin burns with the use of cold atmospheric plasma in the experiment was performed. During the study, an original technique for reproducing a deep thermal skin burns in small laboratory animals (rats) has been developed. It is found that the use of cold atmospheric plasma not only reduces the incidence of purulent complications, but also contributes to shortening of the skin regeneration time by 20% (p<0.05).

Introduction. Currently, in combustiology increasingly used a multidisciplinary approach to the treatment of burns, which is implemented taking into account the pathogenesis of burn disease and its complications. All currently known methods of treating deep skin burns do not allow achieving optimal results, leaving a number of unresolved issues, primarily in terms of choosing a fast and effective method of skin regeneration for such lesions. Nowadays, combustiology centers applying active surgical tactics, which is based on early necrosectomy followed by audo-thermoplasty of burn wounds. A special importance in the treatment of burns is also given to the prevention of purulent complications of such a wound.One of the possible pathophysiological methods to improve the results of therapy of patients with extensive deep burns is the use of physical influenceon the wound surface, in particular, the use of cold atmospheric plasma for this purpose.

The biological effects of cold atmospheric plasma with low-pressure include: antimicrobial and hemostatic, stimulation of tissue regeneration. Its antibacterial effect is caused by damaging the cell wall and membrane of bacteria by ultraviolet radiation and active radicals. In contrast to the existing physical methods to stop bleeding (electrocoagulation, argon-plasma coagulation), cold atmospheric plasma does not damage tissue, but provides hemostasis by accelerating the activation and aggregation of platelets, the formation of a fibrin clot.The issue of the direct effect of cold atmospheric plasma with low-pressure on tissue regeneration in case of damage remains debatable. Some researchers note the acceleration of the proliferation of fibroblasts in vitro when exposed to this type of plasma. There are publications in which the stimulation of the regeneration of damaged tissues is explained by the combination of antibacterial and hemostatic effects of plasma.Thus, the available data makes the implementation of cold atmospheric plasma with low-pressure for the treatment of burns extremely promising.

The purpose of this research is to study the effect of cold atmospheric plasma on reparative histogenesis in deep skin burns in an experiment.

Materials and methods. Experimental research was performed on 40 male outbred rats weighing 230–250 g. All manipulations with animals were performed under general inhalation (ether) anesthesia under aseptic conditions. Reproduction of skin burns of the third degree (ICD-10) was carried out according to our own original developed method (rationalization proposal of the Military Medical Academy No. 14287/1 dated January 19, 2016) (Figure 1).

For the generation of cold atmospheric plasma with low-pressurewas used an apparatus manufactured by specialists of the High Voltage,Electrical insulating and Cable technology Department of the Institute of Energy and Transport Systems of St. Petersburg Polytechnic University after Peter the Great (St. Petersburg PU). The device can be held in the hands, and touching the plasma beam to a biological object does not lead to electric shock.

The device is powered by direct current. The output voltage can be changed in the range of up to 20kV. The current source is connected in series with a needle electrode made of stainless steel (tip diameter 50 μm) through a 120 MΩ resistor .

When the generator starts, a plasma beam is generated between the tip of the electrode and the biological object, which in its physical essence is similar to a positive corona discharge. 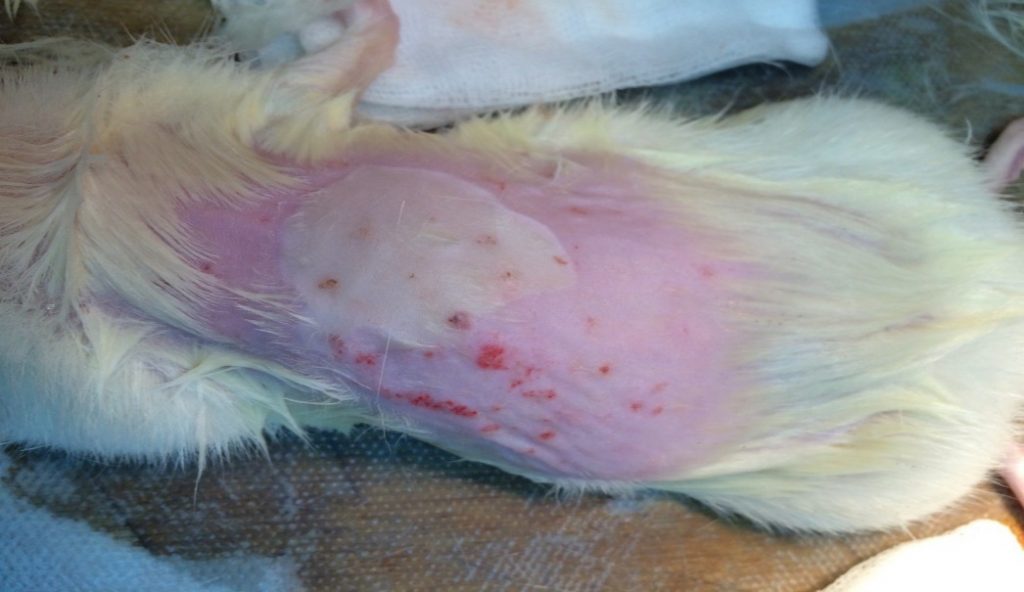 Figure 1 – Rat skin after reproduction of the third degree burn

Animals were divided into 3 groups (8 animals in each group) according to the method of treatment.

In the first group of animals, necrotomy (Fig. 2) till own fascia was performed 60 minutes after the third degree burn. 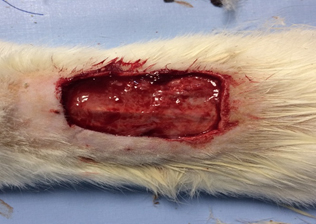 Immediately after necroectomy, the wound edges were fixed to the underlying tissues with interrupted sutures, then the entire wound surface was treated with cold atmospheric plasma for 10 minutes. The distance between the beam source and the wound surface was 0.5–1 cm (Fig. 4). The device was grounded for the manipulation. 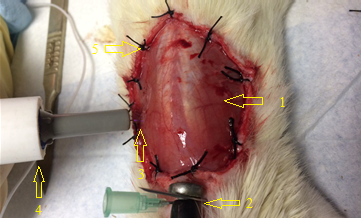 In the second group, early necrotomy and treatment of wounds of animals was not carried out (control group).

In the third group, without wounds treatment early necrectomy was performed(second control group).

Evaluation of the effectiveness of selected methods of treatment and wounds’ photographing was performed every three days. The wounds were examined as well as the character of the discharge, the presence and type of granulations were noted, and the terms of the scab rejection and wound healing were recorded.

With planimetric method by L.N. Popova the area of the wound was determined and the index of healing was calculated by the following formula (Fenchin KI, 1979):

where, S – wound area in the previous measurement, mm2;

The selection of biopsy specimens for histological examination was carried out on 3rd, 7th, 12th, 15th, 21th, 28th days of the treatment. Biopsy specimens were fixed in a 10% solution of neutral formalin, followed by posting through alcohols of upward concentration (30% -100%) and pouring into paraffin. Paraffin sections were stained with hematoxylin and eosin with their further study by methods of light microscopy.

Processing of the results was carried out in accordance with generally accepted methods of variation statistics. As the criterion of validity was considered value p<0,05.

Results and discussion. The regeneration process in the zone of a deep burn of the third degree with the use of cold atmospheric plasma withlow-pressure had distinguishing features. On 21st day of the research, this group of animals showed a reduction in the area of the wound to 6 cm2 (p <0.05). Treatment of a burn wound after early necroectomy makes it possible to accelerate regeneration processes in the early postoperative period by 20% (p <0.05), as well as to reduce the area of the scar tissue onthe 28th day of observation by 52.5% (p <0.05) in comparison to the controlgroup (Table 1).

Performing a radical surgical necrotomy in the zone of deep burn of skin, without further treatment, reduces the wound area by the 21st day to 8 cm2 (p <0.05), the regeneration process is accelerated by 8.6%, after 28 days there is a decrease in the scar tissue area by 10% (p <0.05) compared with the control group.

The results of planimetric studies were confirmed by a morphometric estimate of the number of microvasculature vessels in wound biopsy specimens by 35th days ofobservation. The average number of microvessels in growing granulations against the background of wound treatment with cold atmospheric plasma was 5. Early necrotomy without subsequent treatment allows to increase the number of vessels by 13.4% in comparison to the control group (p <0.05).

Conclusions and discussion. The study results indicate that the use of cold atmospheric plasma without further application of wound dressings enables to achieve wound healing by 28 days, i.e. to accelerate the regeneration processes to 20% (p <0.05), and also to reduce the area of the scar tissue to 52.5% (p <0.05) in comparison to the results of control group animals.Against the background of the implementation of cold atmospheric plasma, an earlier development of mature connective tissue in biopsy specimens is noted, further the thickness of newly formed granulations exceeds the control to 4.8% (p <0.01). Early necrectomy without further treatment reduces the wound area by 21 days to 8 cm2, the regeneration process is accelerated to 8.6% (p <0.05), by 28 days there is a decrease in the scar tissue area to 10% (p <0.05) compared with the control group.

The use of cold atmospheric plasma in the treatment of deep thermal burns of the skin of the third degree (ICD-10) is a promising method.The literature data show that the local application of cold atmospheric low-pressure plasma in the area of the skin defect leads to antimicrobial effect, hemostatic action, and the stimulation of tissue regeneration. These phenomena are due to the generation of free radicals, UV radiation as well as charged particles. The results of our research indicate that the use of plasma in the zone of a deep burn of the third degree enable to reduce the area of the scar tissueto 52.5% (p <0.05).