Abstract. The project of a new apparatus that can objectively detect pain had been developed. Previous research has shown mostly subjective methods, invasive or brain activity-based methods. Now the potential method of objective pain registration is founded but needs more samples. In this research, we made an electric scheme and working principle for new diagnostic apparatus based on skin capacitor changes. The new apparatus will make diagnostics using only one body zone. The method of objective pain registration and current developments are presented in this article.

The method that can objectively register, measure, verify pain and find its localization does not exist. Such apparatus that can satisfy that functions is often necessary for proper diagnostics and science aspects of algesia. Now there are problems in the definition of fantom pain and correct pain evaluation which is needed in rehabilitate and treatment. In our research, we expand the knowledge of pain and facilitate current diagnostics making it available and cheap.

Wrong evaluation of the pain that leads to the incorrect doses of drugs is shown in Marks and Sachar research [1] when 32% of patients after the operation were suffering from pain because of too little amount of opioid anesthesia and their recovery was delayed. Correct pain registration is also necessary for distance or non-speaking (unconscious) diagnostics. Previous research has shown mostly subjective methods, invasive or brain activity-based methods. The most popular is McGill pain questionnaire [2] which include sensory, affective and evaluative words that can be used by patients in their pain description. The problem with the use of subjective methods is that the descriptions of pain strongly depend on the degree of patients excitation. [3]

In the affected area there is an accumulation of algogenic substances due to damaged cells, nociceptors, increased capillary permeability. Damage to tissues excites C-fibers in connection with the release of adenosine diphosphate, adenosine triphosphate, serotonin, histamine and other algogenic substances — mediators of inflammation. Cellular damage leads to the release of proteases cleaved in the blood plasma. So, from kininogen, the peptide bradykinin is produced, which causes incoming current and action potential in C-fibers. The strength of pain in humans is proportional to the concentrations of detectable bradykinin, which, among other things, enhances vascular permeability and sensitizes nociceptors [4]. Also, when a cell is damaged from cell membranes, arachidonic acid is released, which is acted upon by the enzyme cyclooxygenase, forming prostaglandins sensitizing nociceptors to other algogenic compounds [1].

When the primary afferent nociceptors are stimulated, the peptide released in 1931 [5], the substance of P, expanding the vessels and causing edema, including through the release of histamine from the mast cells. Substance P also increases the excitability of C-fibers by blocking potassium channels. One of the reasons for the inadequacy of overcoming pain by classical methods is the difficulty in correctly estimating the degrees of pain. [6] Damage of the same severity can cause pain sensations of different severity in different individuals depending on the conditions and individual characteristics.

The assumption of the connection between pain and the recording local physiological changes possibility led us to the creation of a new pain recording method. Our method will use a matrix of skin capacitor changes which deviation amounts from the neighboring healthy tissues is considered by us as a pain indicator. The project starts with the development of an electrical circuit of the apparatus. The next step is an electrode selection or creation. Finally, we will make an apparatus body on a 3d printer, assemble and program it. Extra effort will be made to conduct research, collect and process statistics. Finally, our apparatus would objectively register local-pathology-based pain using pained zone analysis.

The developed principles of registration:

The electrical part of the apparatus includes a power supply unit, a transmitter and an electric signal receiver, a display for outputting data. System management and information processing is carried out with the help of the microcontroller stm32f103. The power supply scheme of the device is shown in Figure 1.

The transmitter is shown in Figure 2. The principle of operation consists in follows: the microcontroller generates a PWM signal with a specified frequency and a duty cycle to the base of the transistor VT1. On the positive front of the PWM signal, the transistor VT1 opens and in the throttle the current starts to flow gradually increasing. The energy accumulates in the throttle — the longer the pulse, the more energy. At the negative PWM signal front, the transistor closes and as a result of the self-inductance phenomenon on the drain transistor VT1, a large voltage surge occurs and an increased power signal is applied to the transmitting electrode. The condenser C1 installed in the signal path accumulates the transmitting charge and facilitates the full transfer of energy to the electrode. The transistor VT1 should be of high power. 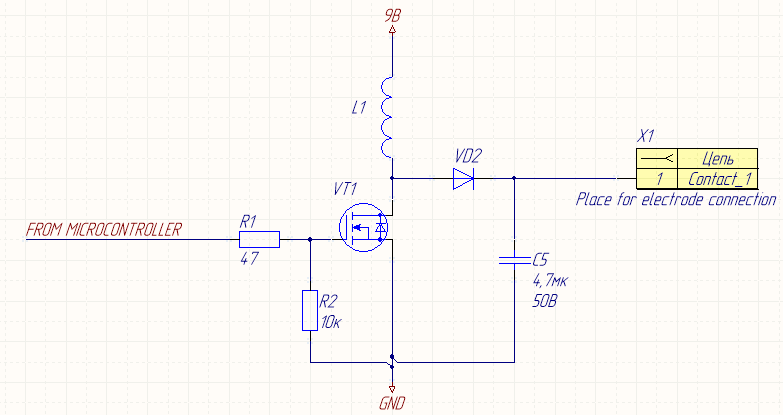 The receiver is shown in Figure 3. The principle of operation is to amplify the received signal using the DA6 instrument amplifier and transmit the amplified signal to the microcontroller for analog-to-digital conversion. Condenser C3 is used to fully accumulate the received signal and then transmit it for measurement.

The algorithm of the device is divided into two stages: the first stage occurs with a positive PWM signal period, the second stage with a negative one. At the very beginning, in a positive period, the accumulation of charge by the throttle occurs. In the future operation of the system, during a subsequent negative front, the signal is emitted at the transmitter and the transmitted signal is accumulated at the receiver. During a positive front, the choke in the transmitter is charged and the accumulated values ​​are processed at the receiver. The output of the digitized values ​​in the graphical form is carried out using an OLED display via the I2C interface.

The sensitivity of the zones to the use of this method can be due to both skin galvanic reaction and a change in the membrane permeability of tissues with tissue polarization. More research is needed to determine the exact nature of the correlation.

The new approach for pain registration is founded. We made first steps for creating an apparatus for objective pain registration by developing a methodic of action and electric scheme. We expect to achieve perfect diagnostic results using skin capacitor change analysis. Current research made on 32 patients [7] show us excellent opportunities in pain detection and evaluation. It becomes possible to analyze pain objectively, immediately and use only one body zone. Hence, our new apparatus will objectively register, measure and find the localization of pain which is also a new page in the study of pain. The results of this research will be incorporated in daily diagnostics.

7. Kozhevnikova A. (2018). Objective Pain Syndrome Registration by Analyzing Changes in the Capacitive Component of the Impedance, Biophysics 63(1), 164-167.