mankind. In modern society, it is a social problem due to the growing number of people choosing to end their own lives. On a global scale, suicide is the fifth most frequent cause of death among people aged between 30 and 49, as well the second among young people in the age group from 15 to 29 [12, 13, 14].

One of the most common suicidal methods is death by hanging [1, 3, 7, 8]. In Europe, the highest rates of suicidal hangings are reported in the former socialist countries – Lithuania, Poland, Latvia, Estonia [13]. Varying information is reported about the Balkan peninsula regarding the number of suicidal hangings committed, the largest number being reported for the region of Mures, Republic of Romania [8].

The AIM of this study is to examine the main tendencies in the dynamics of the level of suicides by hanging committed in the region of Plovdiv over the period 2000-2009.

Material and methods: The object of study are the committed suicidal hangings which are registered at the Departments of Forensic Medicine of St. George University Multi-Profile Hospital for Active Treatment EAD and Plovdiv Multi-Profile Hospital for Active Treatment AD, Plovdiv, over the period 2000-2009. The information about the population in the region used is courtesy of the National Statistical Institute (NSI) [15]. For the collection of input information has been used a historical method of choice. Alternative, variation, non-parametric and graphical analysis has been used in the statistical processing of the information [5, 6]. 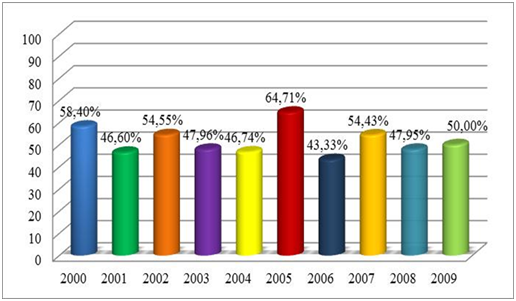 Diagram 1. Change of the relative share of suicidal hangings in the region of Plovdiv over the period 2000-2009

Based on the information available about the population in the region, the hanging suicide index has been calculated and compared to the total suicide index of the region (Diagram 2). 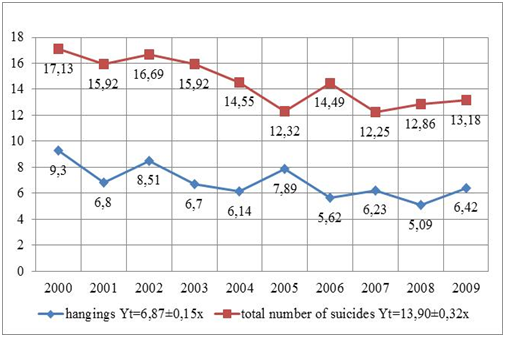 Diagram 2. Dynamics of the suicide index of suicidal hangings and of the total suicide index in the region of Plovdiv over the period 2000-2009 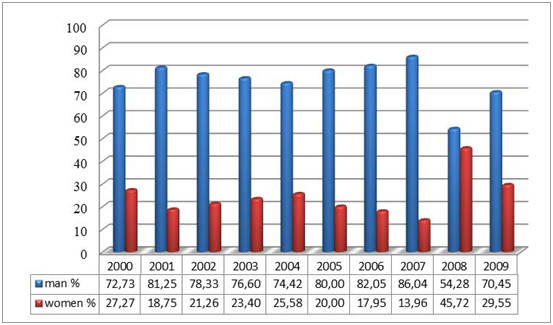 Diagram 3. Gender differentiation of suicidal hangings for the period 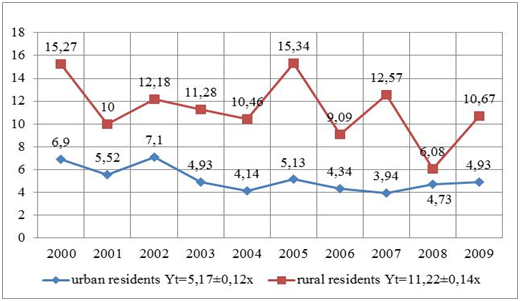 Diagram 4. Suicide index of urban and rural residents who committed suicidal hanging during the period 2000-2009 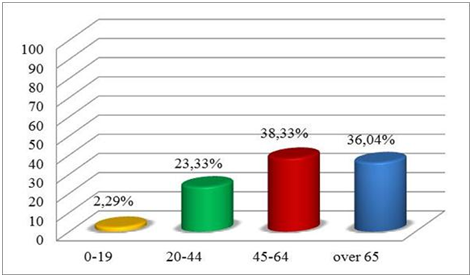 Diagram 5. Age structure of suicidal hangings in the region of Plovdiv in the period 2000-2009

The results presented in Diagram 5 show that suicidal hangings are most common among the active population. Maximum suicide rates are reported for the age group 45-64.

Discussion: The analysis of the data shows that death by hanging is the most common suicidal method used in the region of Plovdiv. The relative share of committed suicidal hangings in reference to the total number of suicides varies over the years, so their dynamics is unstable, with a peak in 2005 and a dip in 2006. The data from the last year of the research is close to the mean rate for the period.

The suicide index (0/0000), reflecting the quantitative side of hangings also varies, but since 2006 its values have been decreasing and its lowest rate was reported in 2008.

The prevalence of male suicidal behavior reflects the same tendency in other countries too, however, the inter-gender ratio is variable. For the region of Plovdiv, the proportion between male and female suicides is 3.2 : 1.0, identical to the proportion in Montenegro, but lower than the rate reported for the Republic of Romania and the Republic of Turkey [1, 2, 7].

The dynamics of suicidal hangings by gender over the entire period under examination shows that relative share of male suicides reaches its peak in 2007, and its lowest rate in 2008. In that same year, the relative rates of male and female suicides by hanging come close, with the difference being smaller than 10%. For the entire period under investigation, male suicidal hangings were 76.04±1.95%, and female – 23.96±1.95%. Non-parametric analysis confirms the existence of statistically significant difference at a level of 95.00%, Р<0.05 (χ2=17.05).

The place of residence is one of the risk factors for suicidal behavior. Throughout the entire period under observation, residents of cities in the region of Plovdiv committed 54.58±2.27% of all cases of hanging, whereas rural residents committed 45.42±2.27%. Defining the suicide index by place of residence of the persons committing suicide has reveled much higher rates for people living in the country than for people living in the city. One of the reasons for this is the population decline of villages on the one hand, and on the other, their deteriorating economic situation. All this, in combination with the easy access to the means for committing suicide, makes it the most common method of suicide in the country.

Comparative analysis of suicidal hangings by age groups shows that their largest share is within the age group 45-64. This group is most seriously affected by the economic crisis. The oldest people who committed suicide were a man and a woman at the age of 89.