The rate of congelation is important for the process of reversible cryopreservation of live systems. During slow freezing in nitrogen vapor, ice particles are formed in the extracellular space. Cryoprotective solution can remain in the liquid state in the cooling process for a long while at a temperature much lower than the freezing point of the solution (supercooling). The formation of ice is a probabilistic event. For freezing to occur, water molecules must assemble, by means of their random movement, into an ice-like structure larger than a critical size. This critical size corresponding to an energy barrier: once this barrier is crossed, it becomes energetically favorable for more water molecules to join the ice structure, leading to the spontaneous propagation of ice.

As a result of a phase transition the liquid (solution) becomes ice. During the phase transition a saltatory change of the solution properties occurs. Its internal energy changes. The excess energy release is accompanied by a sharp rise in temperature, as well as crystallization, which can cause permanent damage to the frozen biological material.

In reality this change occurs with a finite velocity. This means that we need some time to compensate internal energy change. During this time, the phase transition does not occur immediately but gradually, accompanying this process with a release of a certain amount of energy. In order to make the phase transition run nonstop, one need to continuously remove (or add) heat to the system, or to compensate it with the system performance.

As a result, during this time, the point in the phase diagram that describes the system «freezes» (i.e., pressure and temperature remain constant) until the very completion of the process.

To minimize the detrimental effects of this phenomenon, supercooling must be minimized by artificially inducing the formation of ice.

This problem is usually solved by a mechanical seeding which is induction of the formation of ice crystals at temperatures near the freezing point that prevents supercooling. Seeding is usually performed manually by touching a test-tube containing a solution with the cells with forceps or another object that is cooled to the temperatures of liquid nitrogen [10], or can be accomplished by seeding the suspension with ice or some other nucleating agent [11], to encourage ice crystal formation.

The aim of our study was to investigate the possibility of using ultrasonic waves to remove supercooling in the solutions without the use of mechanical seeding [1].

The saline solution for sturgeon [3] was used as a base solution. All tested cryoprotective solutions were prepared in sterile distilled water (DW). Additional components: Me2SO — 10%, egg yolks — 10%. As a control distilled water was used.

A schematic representation of the experimental setup is shown in Fig. 1. Sono-freezing experimental set-up (Fig.1) consists of a styrofoam chamber for freezing of the samples. Cooling were carried out in the vapor of LN2 (-1300C). Fuchs-Rosenthal quartz chambers were used for the freezing of two identical samples. The sample volume is 50 µl. Freezing of samples was carried out in two chambers at once. One sample was a control, the other was subjected to ultrasonic irradiation (frequency of 0.88 MHz, power 1 W/cm2). The distance from the ultrasonic emitter to a sample was 1 cm. Ultrasonic device UZD 1.01 F (Russia).Temperature control system was based on direct measurement of samples temperature by thermocouple logger ATT-2006 (Aktakom, Taiwan) with copper/constantan microthermocouples, 0.1 mm diameter. The temperature in the samples was determined simultaneously every 2 s. The results were recorded by computer. Mathematical analyses of data were carried out with the demo version of the program SigmaPlot 8 Demo.

The dynamics of freezing-thawing events in cryoprotective solutions are presented in Fig. 2. Figure 2 shows the rate of cooling of the solutions when exposed to ultrasound and in control for the distilled water, physiological saline solution for sturgeon (PSS), PSS + 10% Me2SO, PSS + 10% Me2SO + 10% Egg yolk.

Ultrasonic radiation significantly affects the kinetics of solution freezing. As a result of its exposure super cooling effect disappears.

Area of supercooling is presented for illustration on a larger scale for clarity. We can see a characteristic change in the dynamics of supercooling, when exposed to ultrasound in the solution during freezing. Such a change is observed in all the studied solutions.

This effect may be closely associated with the basic structure and physical properties concepts of water. 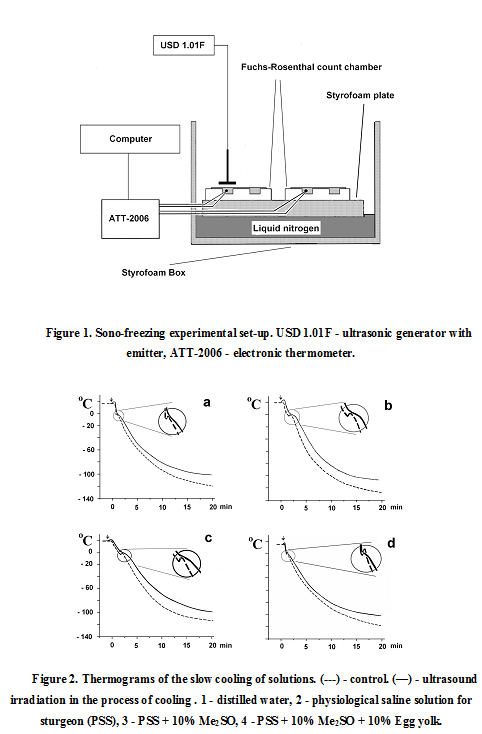 In 1986 the theory was put forward which stated that water consists of molecules of two types: ortho-and para-molecules H2O [6]. This was confirmed by further studies by Pershin [9], which showed the possibility of tunnel exchange between states of a fraction of molecules of these liquids, which manifests itself as band centroid oscillations at a given temperature.

The same authors published the observation that the OH-band center shift to the low-frequency wing was observed under water compression in a field of acoustic pulses of moderate intensity [2].

This suggests that moderate-intensity ultrasound waves in water promotes the formation of more water vapor-isomers, which leads to a change in the ice-like water structure. In other words, the ultrasonic wave changes the structure of water, which increases the number of clusters that are the possible center of the solution crystallization. As a result of such exposure the probability of nucleation of ice crystals is increased and the freezing of the solution occurs with the effect of continuous noncontact ultrasonic seeding.

Noncontact ultrasonic seeding can remove the effect of supercooling. There is a gradual freezing of the aqueous solution.

Thus, we conclude that short-term effect of ultrasound on the freezing process of supercooled aqueous solution at temperatures of freezing is more effective than seeding manufactured by hand. Most likely the cryopreservation of living systems will be more effective in conjunction with ultrasound than with standard methods of freezing.

From the foregoing, we conclude that short-term effects of ultrasound on the freezing process of supercooled aqueous solution is more effective than siding manufactured by hand. Most likely the cryopreservation of living systems will be more efficient with the use of ultrasound than with standard methods of freezing.