Meckel’s diverticulum is a relatively common abnormality of the gastrointestinal tract, occurring in 2% of the normal population. The disease is usually asymptomatic, but can be presented with undefined abdominal pain [5]. The complications besides peptic ulceration, perforation, enteroumbilical fistula, intussusception and hemorrhage include the development of carcinoids and inflammatory pseudotumor.

Anamnesis: 61 years old male complaining of pain in the right abdomen was admitted to the surgical ward of the hospital – Svilengrad. The pain began two days ago. In the beginning it was diffuse and subsequently was localized in the ileocecal region, accompanied by nausea and vomiting.

Physical examination: The abdomen was on the level of the chest. The right half of the abdomen did not participate normally in the breathing movements. There was palpable pain in the ileocecal region. The palpation showed signs of peritoneal irritation and muscular defence. Bloomberg / + / positive. Liver and spleen were not palpable. There was preserved intestinal motility.

Diagnostic and therapeutic procedures: X-ray — no free gas collections under the diaphragm. Ultrasonography of abdominal organs — multiple small calculi into the gall bladder, single simple cyst in the left kidney, no evidence of enlarged lymph nodes and ascites.

Laboratory results: leukocytosis, elevated ESR, slightly elevated AST and ALT, no other deviations from the norm.

Surgical intervention: During the opening of the the abdominal cavity outflowed moderate amount of clear serous exudate. Appendix was ​​flegmonously inflammed, covered with a fibrin coating and adhesions with the surrounding tissues were found. Typical appendectomy was performed. The revision of the small intestines revealed Meckel’s diverticulum, 10cm in length, with tubular shape, located 50 cm from the ileocecal valve, with own meso and catarrhal inflamed wall. A partial resection of the small intestine was performed, including the Meckel”s diverticulum.

Material and metods: Histologic speciments were made with fixative of 10% neutral formalin and embedded in paraffin. The cut sections were 7 mkm thick and stained with hematoxilene and eosin (HЕ). Gross examination of the appendix showed hyperemia of the serosa and whitish exudate in the lumen of appendix. The Meckel’s diverticulum has 10cm in length. The cut surface revealed yellowish nodule with diameter of 1,5 cm (arrow in fig. 1), subserouslly located.

Subserous nodule in the wall of Meckel’s diverticulum (Fig.1) 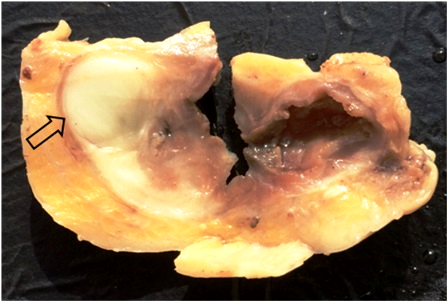 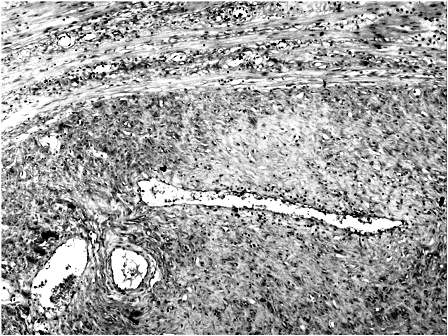 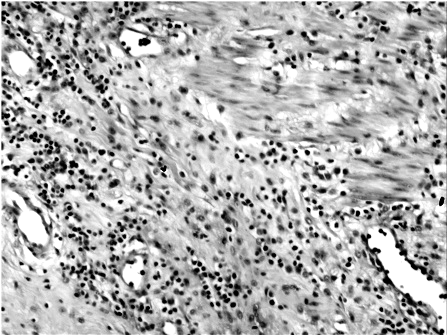 The pathological diagnosis was: 1. Acute appendicitis; 2. Meckel’s diverticulum with phegmonous inflammation and benign inflammatory myofibroblastic tumor in the wall.